Jan Karski, a diplomat and member of the Polish resistance during World War II, describes his experience in the Warsaw Ghetto and his meeting with U.S. President Roosevelt.
Last Updated: April 19, 2022 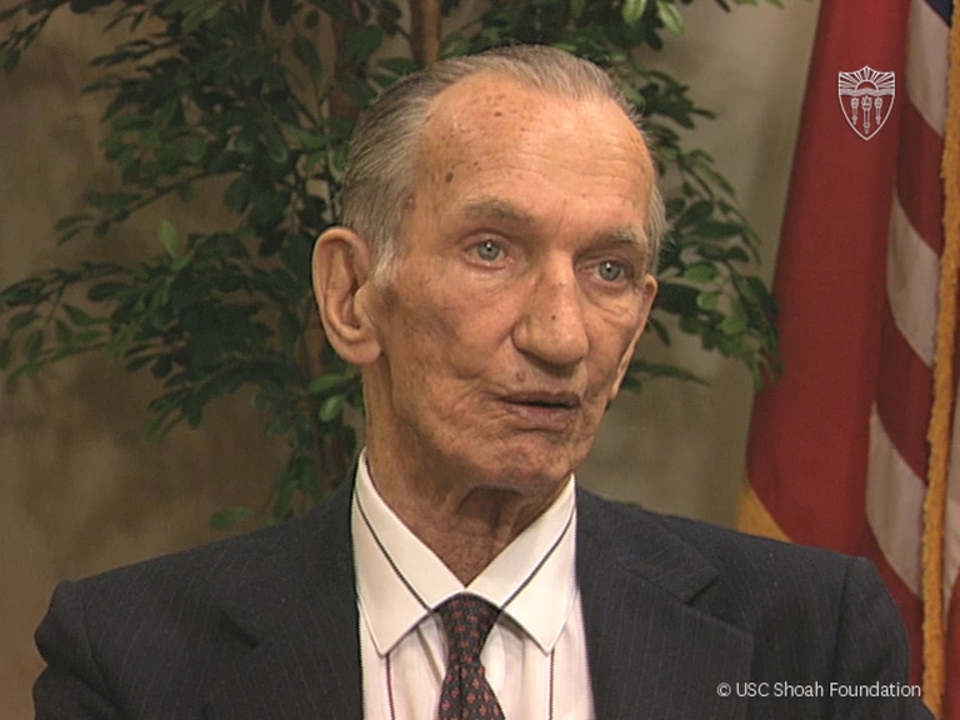 To enter the ghetto was not so difficult. Well, I saw terrible things. Starvation, humiliation, naked bodies only the middle covered by some newspaper. When I asked my guide, what does it mean, he said, the Germans want us to pay for value. There is no money. Now, [INAUDIBLE] vestment is needed. So the naked body only covered the middle. I saw horrible, horrible things. Women feeding babies, but they had no breast. Horrible. I saw too much.

The first time, a leader of a socialist Underground. His name was Leon Feiner. Now, he accompanied me to give me courage that I wouldn't afraid. He was telling me, don't be afraid. It is not so dangerous. I will be your guide. Now, again, I couldn't stand it very much. I never saw in my life this kind of people, this kind of environment. It was not my world. They were not humans. So we left the ghetto. But when we came on the street, I told him, I want to come back. And I did come back two or three days later.

Very often I am embarrassed, because they exaggerate my role. They make out of me an important man during the war. I was a nobody. I was a tape recorder. I was a mailing box. In what way-- what was my leverage? Talking to [INAUDIBLE] or I approach four members of the British War Cabinet. This was the center of power. Lord Cranborne, Conservative Party. Arthur Greenwood, the Labour Party. Hugh Dalton, Labour Party. In the United States, Roosevelt, Cordell Hull, Francis Biddle, Sir Henry Stimson, Secretary of War.

With these kind of people, I had no leverage, you understand? I was waiting for questions. And if a question was asked, I would answer if I knew the answer. But I couldn't ask questions. People ask me, So, you talk to Roosevelt. What did Roosevelt do? What was his reaction? [INAUDIBLE]

At that time, he was informed that I was going back to Poland, by the Polish ambassador who by diplomatic protocol introduced me to the president. So he knew [INAUDIBLE]. When he gave me his hand, this is the end.. So I was sort of an inspired. And I wanted to pin him down a little.

So I told him, Mr. President, I am going to Poland. Every leader will know that I spoke to President Roosevelt. Sir, everybody will ask me, what did the president tell you? Mr. President, what do I answer? And I remember. You will tell your leaders that we shall win this war.

He continuously smoked a long cigarette, a long cigarette holder. We'll win this war. The guilty ones will be punished for their crimes. Justice, freedom shall prevail. You will tell your nation that they have a friend in this house. This is what you will tell them. He gave me his hand. I couldn't tell him, Mr. President, that's all?

These lesson plans use the Ken Burns’ documentary "Defying the Nazis: The Sharps’ War" to explore what motivated Waitstill and Martha Sharp to help refugees.
More Like This Teaching Resources Learning & Events
The resources I’m getting from my colleagues through Facing History have been just invaluable.
— Claudia Bautista, Santa Monica, Calif