Preparing for the Kindertransport

Vera Gissing, a Holocaust survivor from Czechoslovakia, recalls how her family prepared her for the Kindertransport, a rescue mission that brought thousands of Jewish refugee children to Great Britain.
Last Updated: April 14, 2022 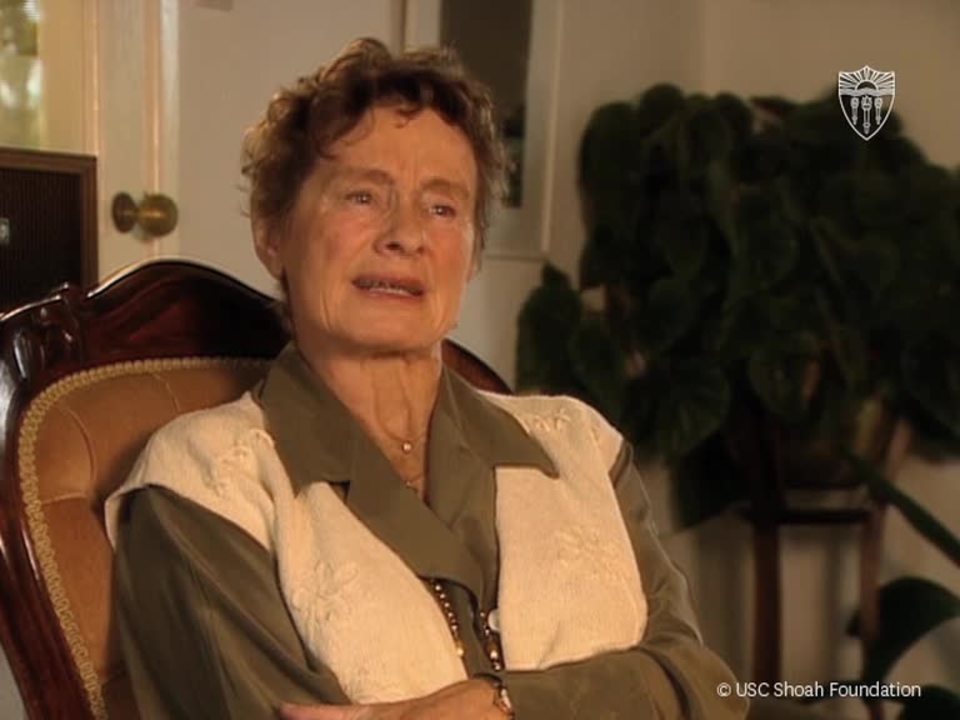 May, 1939. We were sitting at table having dinner, and my mother's plate remained untouched. And then she suddenly pushed her plate away and looked at Father and said, I heard today that both Eva and Vera can go to England. And there was a deathly silence, and my father suddenly looked very pale and drawn. And he buried his face in his hands, and then he sighed and said, all right, let them go.

It was a very, very strange movement-- a moment. And after that, I mean, I was filled with excitement and apprehension. I didn't know anyone from our town who'd ever been to England.

Suddenly, my sister and I assumed great importance, and it seemed like a big, big adventure. And yet, we were both going to different places, I to a family in Liverpool I knew nothing about and my parents knew nothing about, and my sister to a school in Dorset. We were going to be separated, the two of us.

Just before we left, our thoughtful parents gave me the most wonderful gifts. My father gave me a diary. It was a leather-bound book full of empty pages. And he told me to write in it when I was lonely, or homesick, or when I was happy, when I had something of interest to say, so that when I came back home, we could all sit around the table and read the diary together.

And my mother, she carried me on that last night at home to an open window, and I remember the night sky was full of stars. And she said, there may be times when we can't write to one another. But even while we can, let the stars of the night and the sun of the day be the messengers of our thoughts and our love. And in that way, we'll always remain close.

They couldn't have guessed what a godsend those thoughtful gestures would be, not just to me, but to my sister too. Because when war started and all correspondence ceased, we both poured our hearts into our diaries. And I, as a little girl, every night prayed to God and talked to Mother and Father through the stars. And if a falling star suddenly appeared, I thought, that must be a special messenger from Mother.

And it made all the difference. I never felt abandoned by them. I always felt close to them.

I remember very clearly saying goodbye to Grandfather and Grandmother, and as he embraced me and said, you are your mother's child and your father's child, and I know we will always be proud of you. And I felt, I've got to live so that they would be proud of me. And Grandmother, she went over my face with her hands so carefully, as if memorizing every detail.

It was very hard saying goodbye. My mother's sister Auntie Berta, who was the youngest of the family, lived with them. She was a spinster and she was living with them.

She was the skinniest and the most unhealthiest of all the family. And she was very elegant, and she only tolerated me. She was very close to my sister because, as I said, she was the serious one and the older one and the dignified one.

But as she sat between my sister and me in the back as the car sped to the station, I looked at her face, and I could see tears in her eyes, and I could see how pale she was. And I suddenly realized how much she loved us both, and I was glad that Mother had such a nice sister. And I was to be gladder still in latter years.

Saying goodbye at the Wilson Station in Prague in the middle of the night was very hard. The platform was filled with anxious parents and German soldiers. And Mother and Father bravely smiled at us until the time came for the train to leave.

And I cried impulsively, See you again in a free Czechoslovakia. And suddenly, everybody looked horrified and frightened. Luckily the German soldiers didn't understand, because they had instructions to, for any reasons whatever, to snatch a child and keep them there if anybody gave any reasons.

And as the train shunted from the station, my parents were crying, though they still tried to smile as they waved us goodbye. And suddenly, I was so glad when my sister's hand reached for mine and I realized I still had her. And she confirmed this in the same very words.

She said, you'll always have me, come what may. You can always turn to me. I'll be there for you. And this sister who I didn't particularly like, being the elder, bossy sister, suddenly changed into a guardian angel. And she remained so all through the years of the war.

Explore the choices of Jewish partisan Sonia Orban, and gain a deeper understanding of the complexities that young people faced during the German occupation of Poland.
More Like This Teaching Resources Learning & Events
The resources I’m getting from my colleagues through Facing History have been just invaluable.
— Claudia Bautista, Santa Monica, Calif