Holocaust survivor Anna Heilman recalls her part in a revolt at Auschwitz-Birkenau, where she was a prisoner, and describes the aftermath of the revolt.
Last Updated: April 15, 2022 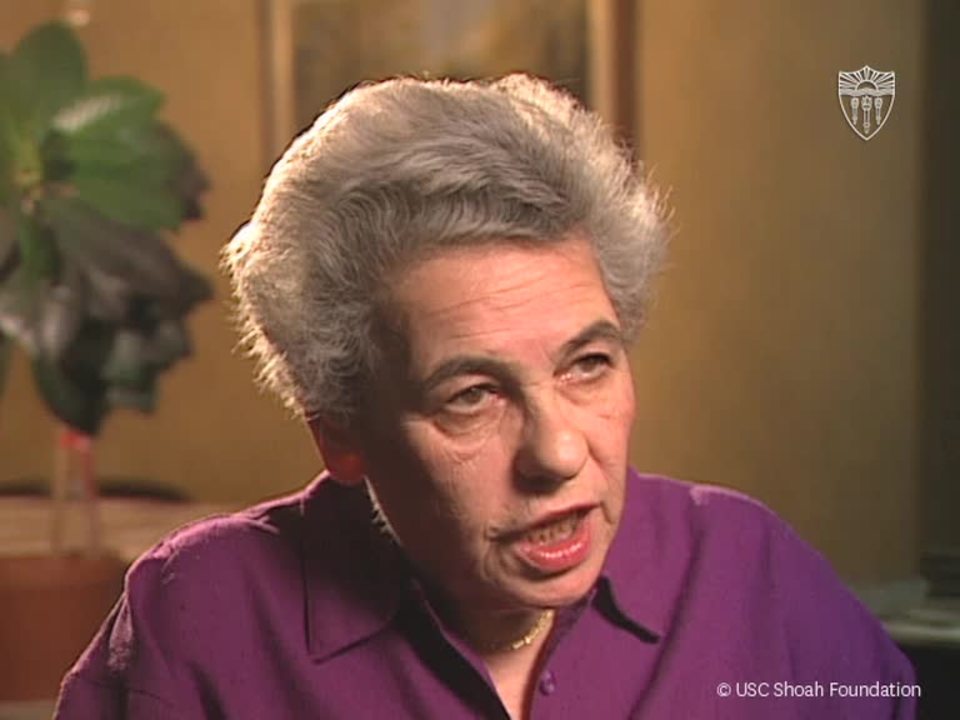 I was very curious. And although we were not allowed to get up from our seat and go to the bathroom only with permission, after a while, you got accustomed to the place. And I used to go around the factory just to look around to what was going on. I used to take two little metal boxes that were used for garbage, and walk around as if I was, you know, doing something.

And eventually, I used to take these two boxes to my sister. She used to put a little bit of gunpowder wrapped up in a little rag tied with a string into a box. And they put garbage on the top box. And I was walking with these two boxes from my place to her door, and from her door back into my place, and put it under the table, and put it inside the cuff of my dress because we didn't have pockets.

From there, I used to go to the washroom, and in the washroom, share this gunpowder with another girl, with Ella. And on the way from the factory, it was about three kilometers to Birkenau, where we lived, we used to carry this on our bodies.

From time to time, there were searches. When we heard that there was a search, we used to unwrap this gunpowder, throw it on the ground, and mix it with our feet on the ground so it was not distinguishable from the dirt underfoot.

And if there was no search?

And from Roza Robota, it went--

It went to a special hiding place. Roza Robota had contact with the men from the crematorium. And they had the privileges to come into the women's camp. And in that particular spot, they used to come and pick it up, and bring it into the crematorium.

In October '44, there was a revolt in the crematorium, the Sonderkommandos, those were the people who were manning the crematorium, knew that from time to time after a certain period of where they were being murdered as not to bear witnesses. And that particular group decided that they are going to rebel.

They used this gunpowder and manufactured little hand grenades made out of metal around boxes of shoe polish with a wick and filled with gunpowder. And when you lit it, it exploded. I don't know how much damage it did or it didn't.

This revolt that took place on October 7, 1944 was aborted. Either they were betrayed, or whatever, all the Sonderkommando people were killed. But the crematorium was destroyed as well. There were four crematoriums in Birkenau, and one was destroyed by this.

After the revolt, the Germans found these little handmade grenades, and they identified the gunpowder, which, of course, we didn't know that gunpowder had some kind of special characteristic. They identified this gunpowder as coming only from the union, and only from Pulverraum where my sister worked.

They started an investigation. They imprisoned the four girls-- Roza Robota, Ella Gärtner, Regina Safirsztajn, and Ester Wajcblum. They tortured them mercilessly, and eventually hanged them publicly on January 5, 1945.

These lesson plans use the Ken Burns’ documentary "Defying the Nazis: The Sharps’ War" to explore what motivated Waitstill and Martha Sharp to help refugees.
More Like This Teaching Resources Learning & Events
Most teachers are willing to tackle the difficult topics, but we need the tools.
— Gabriela Calderon-Espinal, Bay Shore, NY