Isaac Levy, a Rabbi who served as a chaplain in the British army during World War II, recalls the challenges he faced trying to assist survivors after the Holocaust.
Last Updated: April 7, 2022 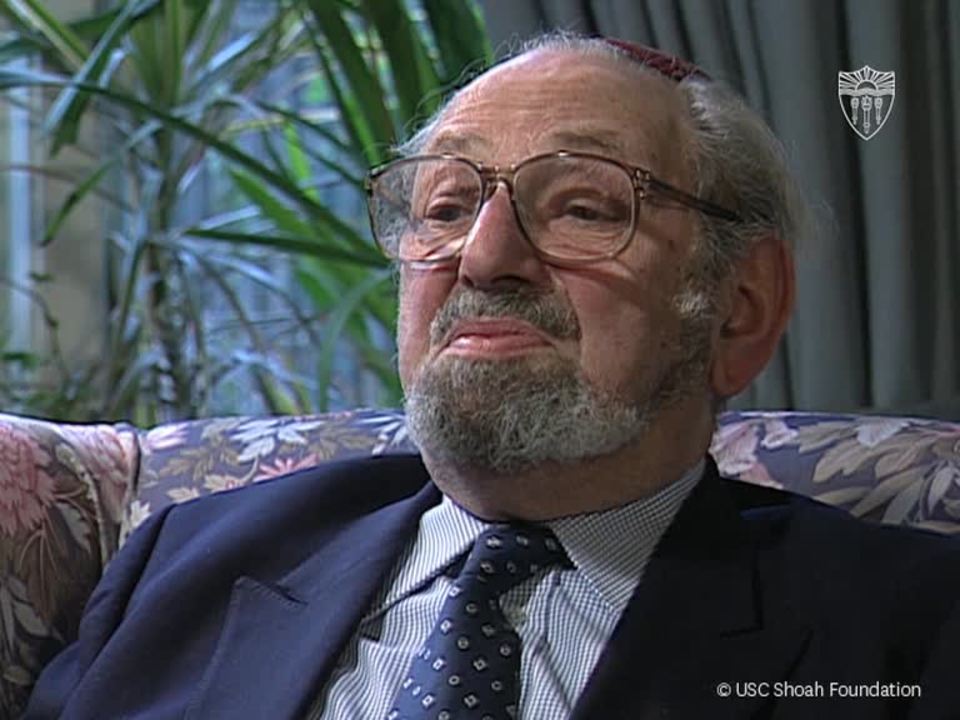 There were one or two Jews originally from Germany who managed to survive and were still in the camp. And I wrote to the authorities and said, what is the future of these people? If they go back to their native towns, how will they be treated? And the answer I got shook me too.

They said, as long as they are in the camp, they'll be treated like survivors. Once they go back to their native cities in Germany, they will be treated like Germans. Irrespective of what they'd been through, the fact that they had been victims of Nazi Germany. And this was brought home to me very, very, very vividly.

I had the opportunity to go to Berlin. It was part of my area, because-- the British zone of occupied Berlin. I arrived there, and I looked for Jews. The synagogues had been destroyed, of course, in the Kristallnacht of November '38, '37. For what? I found that on a Saturday morning, Jews were having a service in the hall attached to one of these synagogues that had been destroyed. And I was deeply moved the fact that they had been survivors.. Many of them had been in Theresienstadt and had come back to Germany, Berlin.

And I said to them, look, I'm only here for a day or so. If you want to communicate with anybody anywhere in the world to tell them you're alive, I will collect your letters tomorrow morning and I will distribute them. I collected them on the Sunday morning. And when I got back to my office, I separated them into-- according to countries.

To Palestine, it was easy. South Africa, to England. There was a sort of a-- there was a unit that was responsible for tracing people. And I sent them off in batches. I heard no more. Until one bright day I was hauled up before my local chief chaplain who said to me, you have been breaking the law. What have I done?

Apparently, somebody who received such a letter wrote to a relative in Switzerland to say that they had heard so and so was still alive in Berlin and if you want to communicate with them, send me the letter, and I will send it off. So I was accused by military intel-- this was intercepted by military intelligence. And I was duly reprimanded. I was breaking the laws of censorship and whatnot. Acting as a sort of unofficial postman.

So I said to my chief, who was my superior in rank, do you mind if I speak to you as a clergyman to clergymen or must I speak to you as a major to a colonel? Of course, I'm a clergyman first. I said, do you know what these people wrote? I am alive, I have survived. No military intelligence involved. A purely humanitarian gesture.

And all he could say to me was, the trouble with you, Levy, is you're too much of a Jewish nationalist. What has nationalism got to do with it, I don't know. But this was the sort of attitude. Again, an example of how they didn't understand the situation.