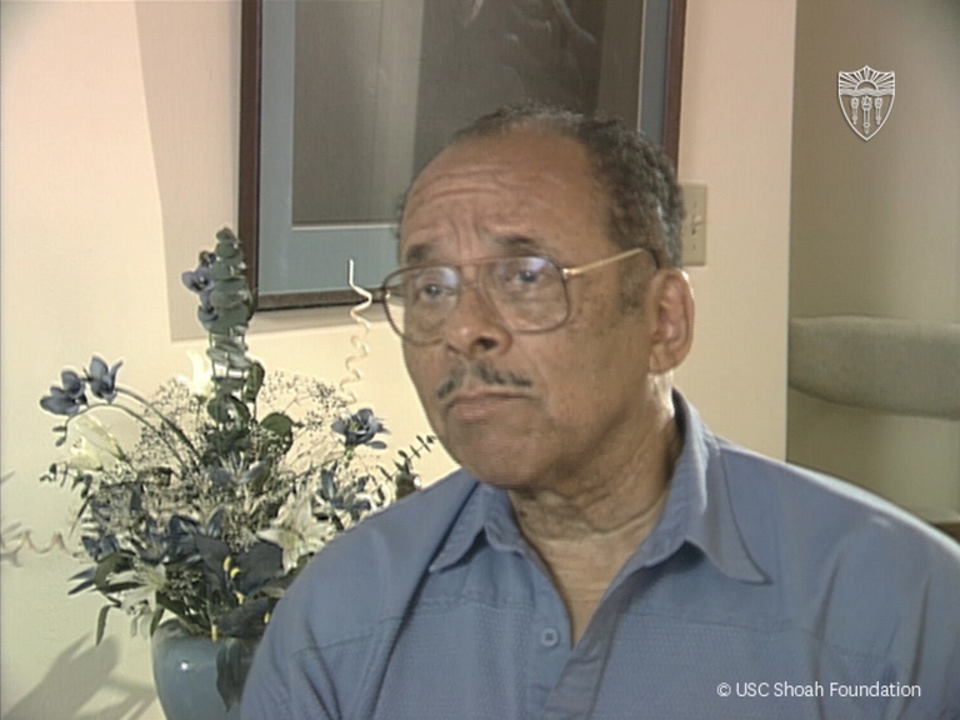 I was sent as part of a liaison group to see if we could arrange for a camp site for our unit. And we arrived in this place called Weimar and drove out to, what I found out now, was to be a concentration camp. And I didn't know anything about concentration camps. So when the officer told us to follow him and get on the trucks, I did ask him, I said, where are we going? And he said, we're going to a concentration camp.

I really was puzzled because I didn't know a thing about that. No one had ever mentioned it in all the training I received. But on this day, in April in 1945, I was going to have the shock of my life. Because I was going to walk through the gates of a concentration camp call Buchenwald. And you got to believe me when I tell you I wasn't ready for that. I was totally unprepared for that kind of an experience.

But you see, I can never, I can never forget that day because when I walked through that gate, I saw in front of me what I call the walking dead. I saw human beings, human beings that had been beaten, had been starved, they'd been tortured. They'd been denied everything, everything that would make anyone's life livable.

Oh, my God, I'd seen nothing like this in all my life, nothing. But when they started to move, stumbling forward toward me, I backed away. Oh, I backed up and I stopped. And I said to myself, my God, my God, what is all this insanity? Who are these people? And furthermore, what have they done that was so terrible that would cause anybody to treat them like this? And you see, I didn't know really, I didn't know.

But there was this young man who spoke English and he began to tell us about Buchenwald. And he said that these people were Jews, they were Gypsies, they were Jehovah's Witnesses, and there were some Catholics. There were trade unionists, communists, homosexuals. Oh, he went on and on. He listed so many different groups that had been placed in the camp. And I knew, that in my judgment, the Nazis had placed them there because the Nazis were saying none of them were good enough, therefore, they were not fit to live. They could be terminated, murdered. Man, I couldn't get a handle on this. This was beyond anything in my experience.

But I walked about the camp. I went to a place where the men would sleep-- they called it a barrack-- and I opened the door, I stepped back across the threshold, and I closed the door. But I could go no further. You see, that odor, the stench, that comes from death and human waste-- well, it was overpowering. It was awesome. I stood there and I was holding my breath all the time. I was holding my breath, and I was going to leave. I knew I couldn't stay.

And so I turned, but before I could step away, I looked down. And there, on the bottom bunk near the door, was a man. Oh, he was an emaciated, that person. He was skin and bone. He was on a bed of filthy straw and rags. And he was trying so desperately to look at me with that skeletal face and those deep-set eyes, but he was so weak. You see, the man had been starved for so long and it was a struggle for him just to look at me. But finally he did. He looked up at me and he said nothing. Nor did I. So now, I opened the door, stepped across the threshold, and closed the door.

I was going to walk away from that place but another man came by. He was-- oh, he was skin and bone. And he stopped right there in front of me. He undid what was holding his trousers, he let them fall, he squatted down, and he began to defecate right in front of me. And I couldn't believe this. Oh, he was so thin, it looked like the bones of his buttocks would come through the skin. But I stood there saying, no, no. You don't do this in public. Where's your dignity?

But you see, that was my hang-up. I was hung up on something called dignity when that man was merely trying to survive. He wanted to live. I didn't know.

Students incorporate new evidence from the history of the Weimar era into the position they are developing.
More Like This Teaching Resources Learning & Events
The resources I’m getting from my colleagues through Facing History have been just invaluable.
— Claudia Bautista, Santa Monica, Calif