Holocaust survivor Esther Bem describes the people in Northern Italy who protected her and her family during World War II.
Last Updated: April 11, 2022 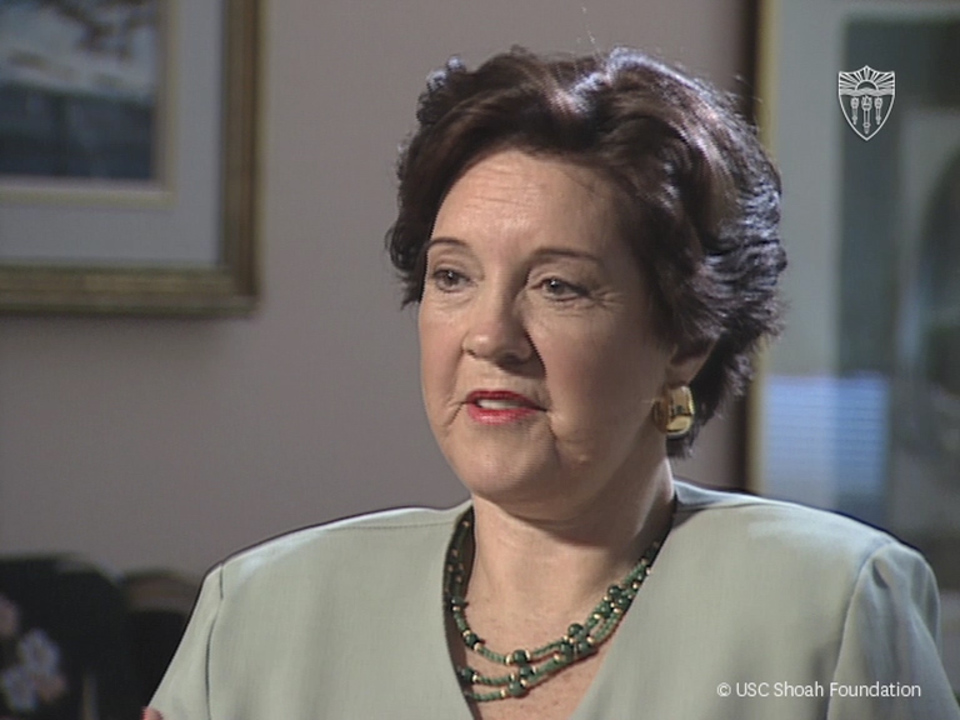 My parents and I took what we could, very little. My father was always very alert when it came to disappearing and running. This was our luck. He never was concerned what are we taking, what are we not taking. He just wanted to leave because we were told, and he knew this is it. And we left.

We started climbing mountains. There were mountains behind that village. It was a very picturesque beautiful village. But we never went so high into those mountains. We would go at the outskirts of the mountain. And we climbed, and we climbed. And we saw huts abandoned, like abandoned. But people lived there.

And we knocked at somebody's door in the middle of the night. And I remember distinctly this was a family with three sons. And their names was Primo, Secondo, and Terzo-- first, second, and third, that was the names.

We said-- we were desperate. In desperation, you are not trying to convince them yes or no. We told them, look, we are refugees, we are Jews. We have to hide, Germans are after us. Take us in. They did. They took us in. They cleaned up a room, gave us a bed, and kept us a few days. But they were too close to the road. And they said to us after a few days, very kindly, they would like to have us, but they can't because they are so close to the road that many people are coming and going.

But they found neighbors who are really in the depth of their mountain, they will take us in.

What were their names?

No idea. It was a father, a widower with two grown-up children, a daughter and a son, who worked on the fields. Kind. Poor. They were at the bottom of the economic scale, you can imagine. They were sharecroppers. They didn't have their own land. They worked for some landlord in Italy, in maybe Milan or Rome. And they shared the crop, like whatever was sold, half of it belonged to them.

So they had almost no money, just to eat and a bit something that was probably for them to buy a new dress for the daughter. And they were terribly poor.

Were they able to feed you and your parents?

They fed us, they kept us, never complained, never looked for excuses. They were warm to us. We never felt that we are intruding, this was the big thing. And it was a real lesson in human decency.

How long were you with them?

We were with them a few months. And then temporarily, they told-- what was beautiful about this family was they were very good singers, and they sang for us every night operas. And after a few months, they got scared because some neighbors started questioning, who are these strangers that you are keeping? Oh, well, they just came. They are here overnight, they will go, they will come. They got very scared. And we knew that we cannot stay anymore.

Fear was a constant emotion that we lived. Fear in the belly, it was something we lived all the time.

When was the first time that you were afraid?

I'll tell you about it. I was afraid all the time, because we never knew what comes tomorrow. Somebody may walk into their house who can denounce us, just go somewhere and tell they have these foreigners here, and they would come and take us. We knew that our destiny is very, very fragile.

Did you have identification papers?

We had, but we couldn't use them because we were Jewish. We were Jews from Yugoslavia. Imagine this to show. This was Auschwitz written on the wall for us right away.

Now these people where we live, they were religious Catholics. They were the most altruistic people that you can find in the world. Imagine that we totally changed their everyday life. This is not somebody who came just and gave donation to save those Jews. They had to change every minute of their life. They did not have running water nor electricity. They had to carry water from some high well on the top of the mountain.

So here we are three more people to carry for them the water. And we couldn't help them because we were not to be seen outdoors.

Could you ever go out of their house?

We did outdoor a little bit, but we didn't dare. If somebody walks by, there were neighbors, there were people. They went to church on Sunday. So they knew they had friends. But they eliminated their social life totally. What these people did for me, I wouldn't like to be put to such a test.