Bernhard Storch, a soldier in the Soviet Army during World War II, describes what he saw as he and his fellow soldiers liberated the Majdanek concentration camp in 1944.
Last Updated: April 19, 2022 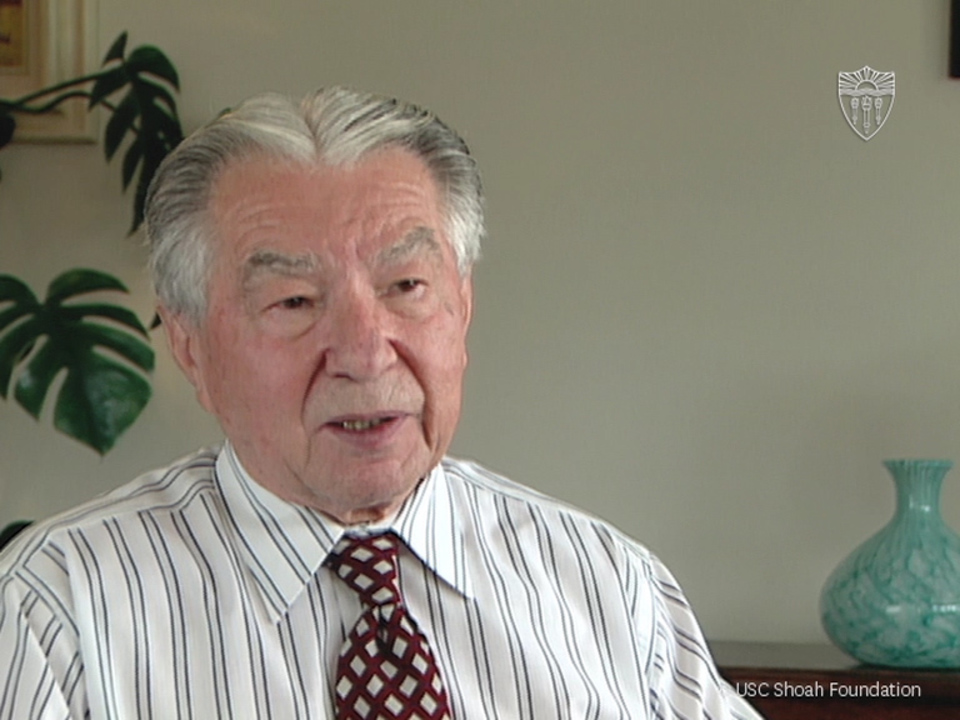 Was there a big gate?

There was a gate.

A big gate. Yes, a big gate with the wires and everything.

Barbed wires all around?

Barbed wires all around. And there were buildings. And we still didn't know it was a extermination camp. Nobody told us that.

What did you think it was?

We thought it was barracks, military barracks.

Ah, so you thought you might have German soldiers in there.

Yeah, exactly. And as a matter of fact, we did. We caught there four SS people and two Polish collaborators. And I didn't do it myself, but the other units did it. They were tried after the war. But we still did not visualize. We thought a factory, a big factory. Of course, we saw a chimney a little farther down. We saw a tremendous mound of ashes. But we still didn't know. Maybe that's a factory. Maybe it's something. Maybe that's industrial waste. Whatever it is.

And they had sorted out shoes, ladies', men's, and children's separately, completely separately. There were thousands of the shoes. And every shoe was sorted out by pair. It was sorted out and just there. One shelf after another. So that's what we saw in that thing. And there was ladies' and men's shoes. And on the side, again, we saw a big mountain of ashes, which we did not know what it was.

They had sort of like shower heads on the ceiling. We didn't know what. We thought it was water for shower. They had very small opening in the steel doors that you can see from the outside. You couldn't see anything from the inside, but you could see from the outside. They had small little opening, small windows sort of with gates on the top of the ceiling, on the side of the ceiling. And there was also looking in from on the top was also sort of like an opening. And that was the gas chambers.

But it was more than one.

Yes. Absolutely. Then after that, somebody told us what it is.

One of the officers came in from the outside. He already knew.

So the Polish officer had found out.

Found out, and he told us what it is.

What did he say exactly?

Well, he told us that's where people were gassed.