Life or Death in the Netherlands

Marion Pritchard, a member of the Dutch resistance who hid a Jewish family during the Nazi occupation of Holland, describes what happened when a Dutch Nazi policeman investigated her house.
Last Updated: April 13, 2022 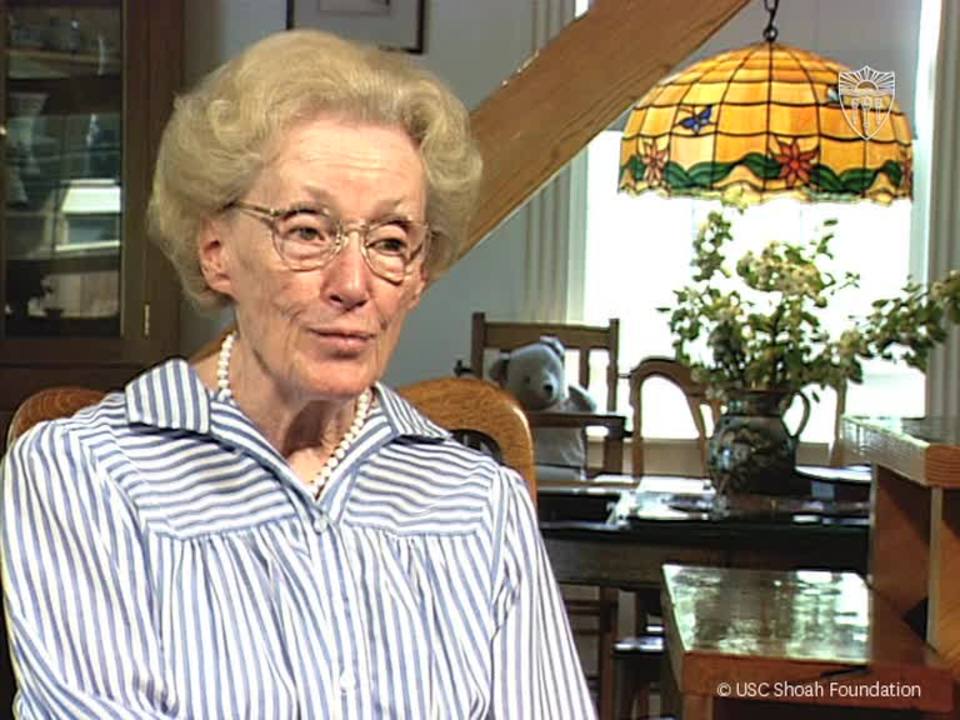 Miek van der Loeff, who was the director of the Amsterdam Municipal Electrical Works by then, asked me to find a place for his friend, Freddy, and Freddy's three children to go into hiding. And I couldn't find any place that would take all four of them. So then Miek moved us into the servants' quarters of his mother-in-law's house out in the country. That's that yellow house on the pictures.

When you agreed to do this, what was your relationship with this person who asked you up until that time?

Oh. His parents were best friends with my parents, and I had known him all my life. My parents were older for parents of children my age. So my parents' friends children tended to be 10 to 15 years older than I. But I knew them all.

And so Miek is the one who asked me to find a place. And he and his brother built a hiding place underneath the living room floor. At night, I'd open it up.

Because when you heard a motor vehicle come, or a truck, or whatever, you knew that it wasn't somebody Dutch. You knew it was most likely the Nazis looking for Jews. So we practiced, and I could get him and the kids in there and cover it all up in about 30 seconds.

And this one particular night, a Dutch Nazi policeman brought three German Nazi officers to the house. And I thought they were in the hiding place, but I'd let them out-- I let the kids out after half an hour, because I hadn't had time to give the baby her sleeping powder. And she began to cry. And Freddy decided to stay in the hiding place, because he was working on his PhD thesis, and he was in the middle of an important chapter. Some people know how to concentrate.

So then the Dutch policeman came back. Because it was customary for the person in hiding to sleep in the same bed with a member of the host family. Because if the Nazis came, and they found, say, that there were five beds slept in but only four people, they could guess that the fifth person had gone out the window or something like that. So this night, just the Dutch Nazi policeman came back. And I couldn't think of anything else to do except to shoot him.

How did you have a gun?

Miek, the gentile who had asked me to find a place for them, had given it to me. And I had put it behind the books on the shelf above the bed, never intending to use it. I'm against capital punishment, and I'm against abortion. I can make exceptions on abortion, of course. But I am basically opposed to capital punishment and killing in general.

By then, obviously, if he'd gone into the other room, he would have seen the kids. He might have known the kids were around anyway. But my instinct was that if I didn't get rid of him, those kids were doomed.

And he went to see the baker-- and I have a picture of the baker somewhere-- who in normal times brought his wares around in a wagon with a horse. And the baker agreed that as soon as curfew ended in the morning, he would come with his horse and wagon and get the body. And before Karel came back, together they went to see the local undertaker. And the local undertaker agreed to bury the body in a coffin with somebody who was having a funeral the next day.

These lesson plans use the Ken Burns’ documentary "Defying the Nazis: The Sharps’ War" to explore what motivated Waitstill and Martha Sharp to help refugees.
More Like This Teaching Resources Learning & Events
Using the strategies from Facing History is almost like an awakening.
— Claudia Bautista, Santa Monica, Calif