In this video, Dr. Paul Bookbinder gives an overview of the Nuremberg trials.
Last Updated: April 11, 2022 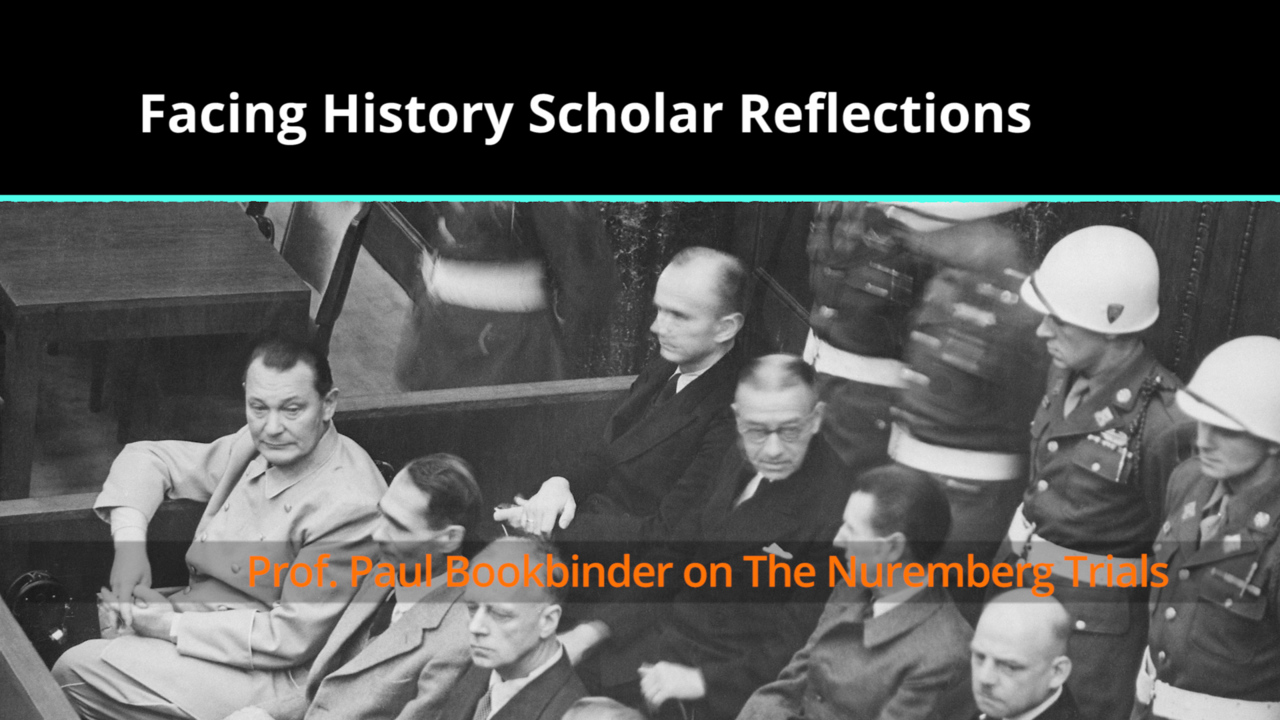 I'm Paul Bookbinder, Professor of History at the University of Massachusetts, Boston. Feeling the pressure of rank-and-file soldiers and civilians, the leaders of the powers who had been responsible for the defeat of Hitler, the Nazis, and Germany created an international military tribunal to bring the leaders of the Nazi movement to justice. This international tribunal was made up of the United States, England, France, and the Soviet Union. And prosecutors from each of these nations and judges from each of these nations would decide the fate of Nazi leaders, key members of Nazi society, and those organizations which were basic to the Nazi state.

Ultimately, the decision was made for four charges. The first of these charges was waging aggressive war. The second was standard war crimes charge, which meant the way in which prisoners of war and civilians in the wartime countries had been treated. A new charge was created that would ultimately be the most important for continuing looking at genocides and trying to deal with it. It was for crimes against humanity, things that didn't fit under traditional war crimes. And this charge was key to providing some sort of justice for the millions who were murdered in the Nazi mass murder programs.

The fourth charge was a conspiracy charge. The key element of this charge was that not only those who had actually carried out the murders, but those who had helped organize the murders, those who had given those orders, and those who facilitated the process were also guilty of conspiracy to commit murder and to commit crimes against humanity. That allowed for the trial of many of the significant Nazi leaders without whom the Holocaust would never have happened, but who may not themselves have actually murdered anybody.

The trial was elaborately organized and was the first of its nature to be broadcast on the radio and to be the subject of considerable newsreel footage. The defendants were granted lawyers and the ability to summon witnesses in their defense. Most agree that it was procedurally fair. And the clearest evidence that it wasn't purely victor's justice was the fact that not all the defendants were convicted, and that even of those convicted, sentences varied from death sentences to imprisonment.

What is so important about this trial is it has served in a precedent for future situations where ethnic cleansing or genocide existed. Now there is a precedent for when mass murders take place. And we have seen this precedent invoked in Cambodia, in Rwanda, in Kosovo, and in other areas of the world as well.

Students explore the long history of discrimination against Jews and come to understand how anti-Judaism was transformed into antisemitism in the nineteenth century.
Collection
Add to Collection

Students are introduced to the many factors that influenced Americans’ will and ability to respond to the Jewish refugee crisis, including isolationism, racism, xenophobia, and antisemitism.
Collection
Add to Collection

Explore the digital version of our core resource on the Holocaust to find classroom-ready readings, primary sources, and short documentary films that support a study of the Holocaust through the lens of human behavior.
Lesson
Add to Collection