In this classroom video, students explore the nature of justice and how the unwritten rules of society can impact how laws are carried out.
Last Updated: July 28, 2018 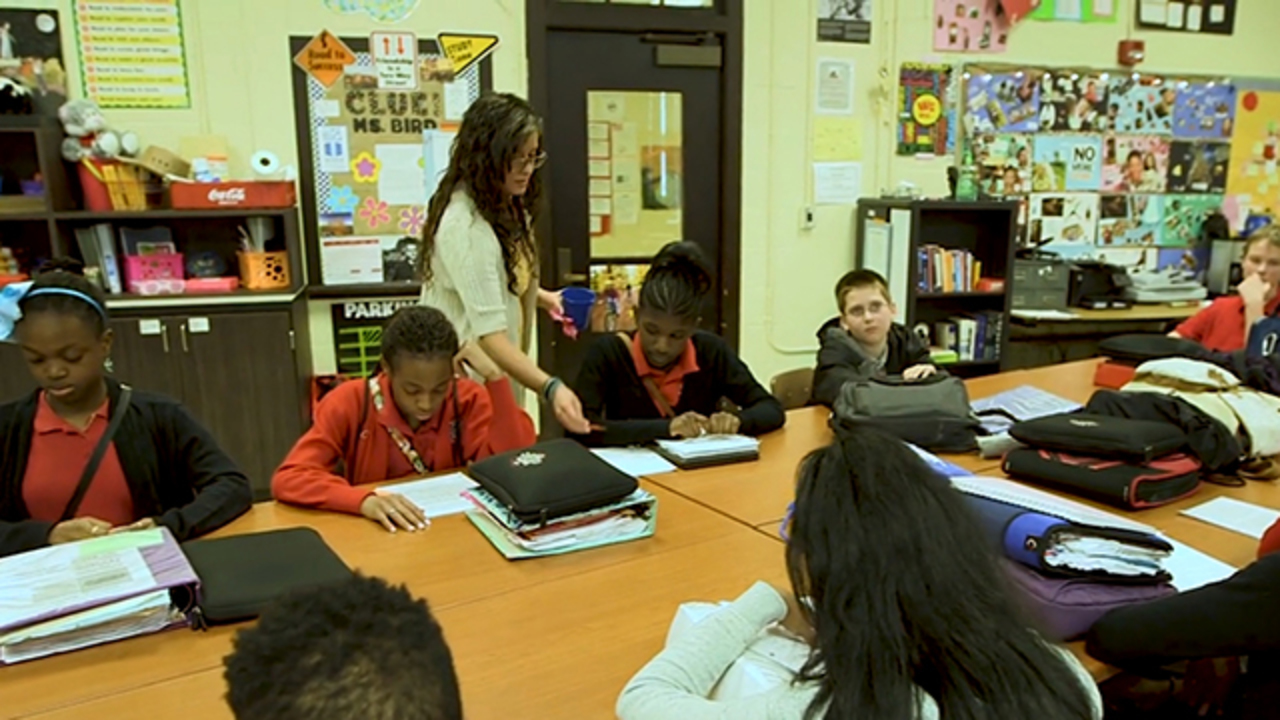 [SPEAKER 1] We've finished the book, so what's left and Teaching Mockingbird Guide is the section looking at apologies made to people who were wrongly accused of crimes, reparations made to people who were affected in that way, and various other reconciliation, that kind of thing. How can we memorialize people who were affected by legal injustice? And the kids have this real strong interest in that because it's the trial that really stuck with them the most. So this week, as we go through the post reading, we're going to be talking about what are some ways that people have tried to apologize, and is it enough, and how can we, going forward, try to prevent this kind of thing from happening. Or if it does happen, how can we make it better, make it right? As the students come in, I'm going to hand them a random number, and it's going to assign them to one of the five documents, so that group of three or four students will be charged to be the expert, if you will, on that document. They'll read it together. They'll come up with the most important points. Each document has one to three connection questions that the group will discuss and provide a quick answer to. Once everyone's had, you know, 12 to 15 minutes to work on that part, they'll have a seat. And then, each document will be called up one at a time for the group to give us the recap. So if you would, take your paper that you just got back and head to your document. [STUDENT 1] Pardons correct the official record, declaring that an individual was falsely accused and convicted of a crime he or she did not commit. [STUDENT 2] In the United States, pardons have issued by nearly every Southern state to exonerate-- I think that's it-- individuals who were unjustly arrested and punished for crimes they did not commit during the Jim Crow era and the Civil Rights Movement. [STUDENT 1] Based on connection questions-- what number did you do? [STUDENT 3] I did one. [STUDENT 2] I did the first. [STUDENT 1] Yeah, I did one. Governor Bentley states that the Scottsboro Boys had finally received justice. Do you agree? [STUDENT 3] No, I disagree. [STUDENT 1] I said-- I said, I agree and disagree, because although we know the truth today, they were still harshly punished, and it does not matter how long ago it was, there was still pain. [STUDENT 2] I said, I disagree. I think the boys that were released didn't you have justice, because there's still hatred throughout the community that could really affect them and drive them to do things that they would never do, like suicide being a factor. And definitely the boys. I think there are fears that they killed, I think-- so I think there were a few that they killed. They definitely don't see justice, because I mean-- [STUDENT 1] They're dead. [STUDENT 2] They're dead, right? [STUDENT 1] Their life ended early because of a false accusation. [SPEAKER 1] I checked on most groups, and kind of already asked you all some of the questions that you're going to answer for the class, and everybody seems to be on track with good responses. So go back to your seats, unless you're 6.2. 6.2, stay over here. All right, document is on Truth and Reconciliation Commissions. They're going to tell us all about that. They had one question. I know some of you had two or three questions. But they had a long document. Their one question, according to the Greensboro Project's mandate, what actions can help provide healing and hope to their community? What actions might impede healing and hope? And do you agree? [STUDENT 4] So according to the Greensboro Project mandate, healing and provide healing and hope, what was he brought by-- coming together, just acknowledging people's feelings. Also, discovering and disseminating the truths. [STUDENT 5] And then, clarifying all the confusion that was in the community, and what actually happened instead of people who say, oh, it was an accident, or whatever. [SPEAKER 1] Thank you. And then how would you guys answer that last question again that says, how long do we have to pay for the sins of our forefathers? [STUDNET 6] I would answer that question by saying that, until people feel like it's stopped being an issue, like those acts stop happening, like there can be-- you can heal, once those acts stop happening, because if there is more actions, like they're happening, the healing will never start, and you will still have a scar, and still want to scar. Like, a lot of times you have a bad scar that hurts on your arm, you can't forget it's there. But like, if it heals and it's still there, you won't notice it as much. And that's how you forgive forefathers. [SPEAKER 1] Once the accusation of rape in the novel came now, it's been dark going forward. There was a little bit of light, you know, with the kids and Boo Radley coming back into the picture. But even when that happened, they were still stuck on that which was dark that they had just read about and learned about. I think, yeah, it is dark. It is difficult and heavy to deal with. But I think what we're doing today and what we're going to continue tomorrow is going to help lift some of that off of them. I hope it's going to help lift some of that off of them, because I know that this has been some difficult stuff to deal with as, you know, 12, 13-yearolds. It's essential to start with contracting and identity, and being comfortable with one another, being like a family with one another. We leave this classroom, and we may not be friends, but while we're here, we're civil, we're getting along, we're friends, we're trusting. And that's essential.