The Era of Modernization in China Part Two: Evolution of a Nation 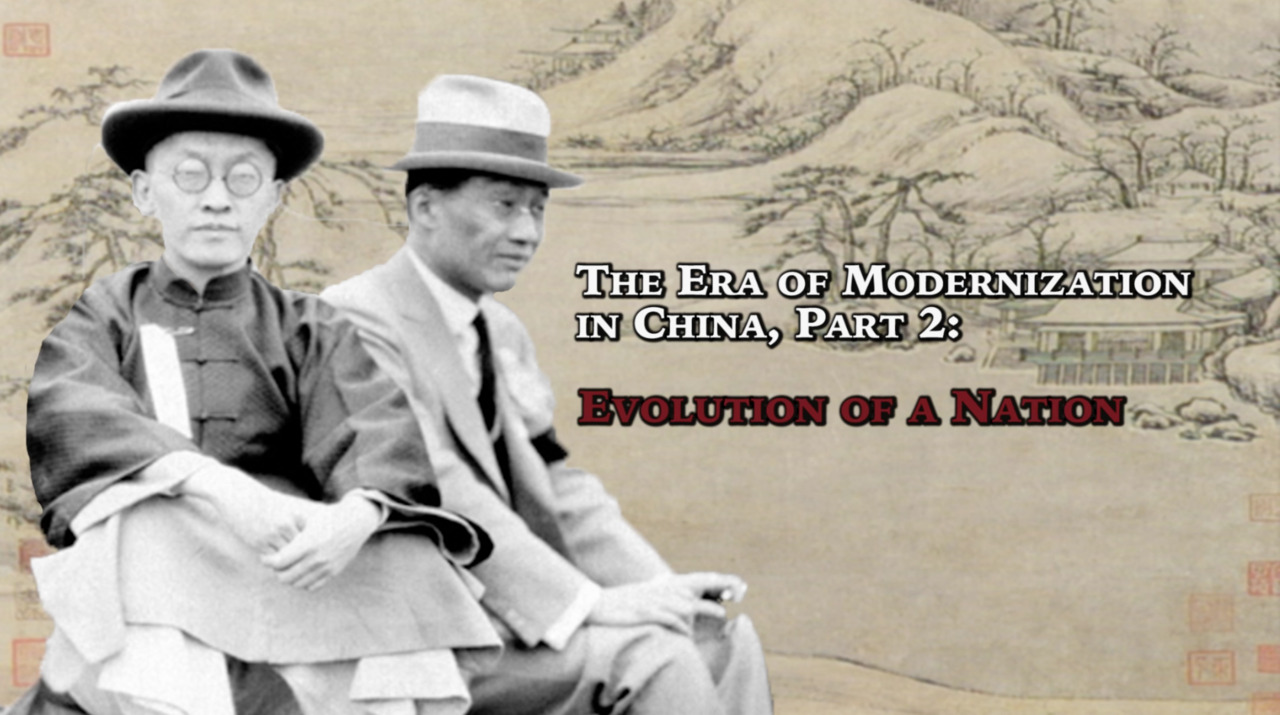 Much of the early 20th century in China is really the story of a country trying to come into being as a nation-state. It was a traditional empire that had existed under the emperors for many, many centuries.

In 1911, the last emperor was overthrown, and after that, China became a new fledgling republic. Asia's first republic, as it happened, which tried one way or another to work out how the problems of increased military strife from within the country and imperialist attacks from outside could be dealt with, could be fought back against. This is really the central political and social narrative of China during those decades.

Following the collapse of the Qing dynasty, the future of the new Chinese republic remained uncertain. Although Emperor Puyi had abdicated the throne, attempts to establish a legitimate centralized government were complicated by political turmoil and the ambitions of provincial warlords, who remained in control of large parts of the country.

Meanwhile, as World War I kept international focus on Europe, educated Chinese youth developed a variety of competing visions for a modernized, unified China. These visions would eventually foment the political parties that would define the country's domestic landscape for decades to come. And as the Great War came to a close, Chinese youth brought them to the forefront.

The date May 4, 1919 is one that, even today, any educated Chinese would know, because it marks one of the most important events in modern Chinese history. And the reason for that, at first glance, seems almost trivial, which is a demonstration by university students in the center of Beijing. But actually, this demonstration, by about 3,000 students from Peking University, was a turning point in terms of how China thought of itself as a nation-state. Because the events that led to that student demonstration actually originated not in China but a very long way away, in Europe, and particularly in Paris.

On the 30th of April 1919, a very important document was signed, the Versailles Treaty, which ended the Great War, World War I, in Europe. Now, it ended it in Europe, but we often forget that actually, it was genuinely a World War. Both China and Japan actually took part, and they took part on the Allied side, alongside the United States, France, the British Empire, and Italy.

China contributed about 140,000 workers to the Allied war effort, most of whom were peasants who had never left their homeland. Many worked in high-combat areas, digging trenches along the front lines in Flanders in France. By the end of the war, about 3,000 had given their lives, and China expected to be repaid for this contribution after the war.

Chinese representatives were present at the Paris Peace Conference, and they hoped to reclaim German territorial possessions in the Shandong province of China. However, it turned out that Japan had been promised the same lands for its own contributions, and as the only Asian nations sitting among the Big Five powers at the conference, it was granted the land China felt it had earned for its efforts.

When this news hit Beijing-- hit the Chinese capital-- many of the city's nationalistic, patriotic youth, in particular, were just outraged that China had made this contribution to this global war, had fought on the Allied side, and once again, as seemed to be happening so often, year after year, decade after decade, they had been denied the right to reconstitute themselves as a free and sovereign nation-state.

And what happened was that 3,000 of the students from some of the capital's finest institutions gathered in front of the Gate of Heavenly Peace, made speeches, and then made their way to the house of a government minister, a Chinese government minister, who they felt had been responsible for what they saw as the betrayal at the Paris Peace Conference. They ended up beating him up pretty badly. So this set of events, taking place on the 4th of May 1919, quickly became enshrined in legend as a sign that China's nationalistic youth, in particular, would no longer tolerate what they saw as the two perils that were facing China.

And they were defined, quite simply, as warlord-ism from within China, the idea that China was split between rival military factions instead of being a genuine democratic republic, and imperialism from without, the idea that the foreign powers Britain, France, the United States could just push China around, could make it do whatever it wanted.

And instead, they came up with a two-part slogan for what China needed instead. And again, it's a slogan that still is heard in China today. People will recognize what you mean. And in Chinese, it's said as [SPEAKING CHINESE]-- Mr. Science and Mr. Democracy, two, kind of, characters, thought up to express what China needed. And these two ideas, Mr. Science and Mr. Democracy, sit at the heart of what these young thinkers and many of their older counterparts thought had to happen in China.

In other words, Mr. Science was a way of saying China needed to modernize. It needed to develop its own technology. It needed to do what Japan had done and increase its educational level so that it could learn to defend itself, to educate itself, and create a strong and prosperous society, economy, and culture.

At the same time, [SPEAKING CHINESE] was a reminder that technology had to change along with politics and that China needed to move away from the kind of world where having the biggest army would get you into power and instead, move back to the promise of the republic that had been founded in 1911, when the last emperor had to abdicate the throne, and instead, go back to the idea of constitution, perhaps of elections, but certainly of mass popular participation in politics.

By the 1920s, the most important figure in the foundation of the Nationalist Chinese Movement had already been notorious for decades for wanting to overthrow and unify the Chinese government. His name was Sun Yat-sen, and even today, he is regarded as the father of modern China.

Sen was one of the founders of the Nationalist Party, the Kuomintang, which still exists today. He had the support of many of the provinces in China, but he recognized that the only way to unify the country would be to form an alliance with another Party that was small but also had significant influence with Chinese youth, the newly-formed Communist Party, established in 1921.

So, in 1923, Sun Yat-sen, the Communist Party, and another young communist state, Soviet Russia, joined forces to reunite China for a nationalist revolution against its controlling warlords.

Sen would never see this vision become reality. He died of cancer in 1925 and was succeeded by General Chiang Kai-shek who had a similar vision for the future of China, but was much less trusting of the Chinese Communists and the alliance with Soviet Russia. He would, however, maintain this alliance through the major event that would put the Nationalists in power.

In 1925, there were major strikes across many of China's cities in something called the May 30 Movement, protests against the brutal treatment of Chinese workers by the imperialist powers. And this triggered and stimulated the alliance of the Nationalists and the Communists, along with the Soviets, to decide that the moment was ripe to launch their national revolutionary army northwards to reunify China.

And in the months of 1926, into 1927, they moved northwards. And eventually, by early 1927, in a flawed, uneasy, but still very discernible way, creating a reunified China, which would be seen as a revolutionary China under the leadership of the Kuomintang, the Nationalist Party.

Almost immediately, Chiang Kai-shek would turn on his communist allies, having them rounded up, tortured, and slaughtered throughout Shanghai. Surviving members were exiled to the countryside, and Chiang Kai-shek moved his Party capital to the city of Nanjing, where his military power was strongest.

The Party had a brutal human rights record and never fully realized its vision of unification, but over the next 10 years, it did make steps toward establishing Chinese sovereignty. It built infrastructure in the form of railways, gained a seat at the League of Nations, and regained tariff autonomy, which allowed it to charge what it wanted for goods moving in and out of China. All the while though, Communists from within were plotting to regain influence and imperialist forces from without sought to kill the notion of a modernized China.

So this was a country that was at least nominally unified, beginning to make progress domestically and internationally, but with huge flaws in its own government and a huge variety of challenges from the outside. But all of those challenges, all of those flaws paled into insignificance compared with one big threat, in the end, the most existential threat to China during that period. And that was the actions of its neighbor across the East China Sea, the Empire of Japan.

Japan had developed into a highly militarized nation-state throughout the early 20th century, driven by a national concept known as Pan-Asianism, the idea that it could defend the East against Western powers throughout Asia. In this way, the Japanese felt it was their duty to fight back against Chinese sovereignty, the very idea that Chiang Kai-shek and the Chinese Nationalists had been working toward for decades.

In keeping with this mission, Japan occupied almost the entire northeast of China in 1931, sending a clear signal to Chiang Kai-shek that it was time to prepare for war.

Facing History and Ourselves, “The Era of Modernization in China Part Two: Evolution of a Nation,” video, last updated April 18, 2022.

Students reflect on the past year and generate ideas for the kind of learning community and learning experiences they are hoping for this year.
Collection
Add to Collection

Read aloud a chapter of a book your students are interested in to build community around stories and storytelling.
More Like This Teaching Resources Learning & Events
The resources I’m getting from my colleagues through Facing History have been just invaluable.
— Claudia Bautista, Santa Monica, Calif