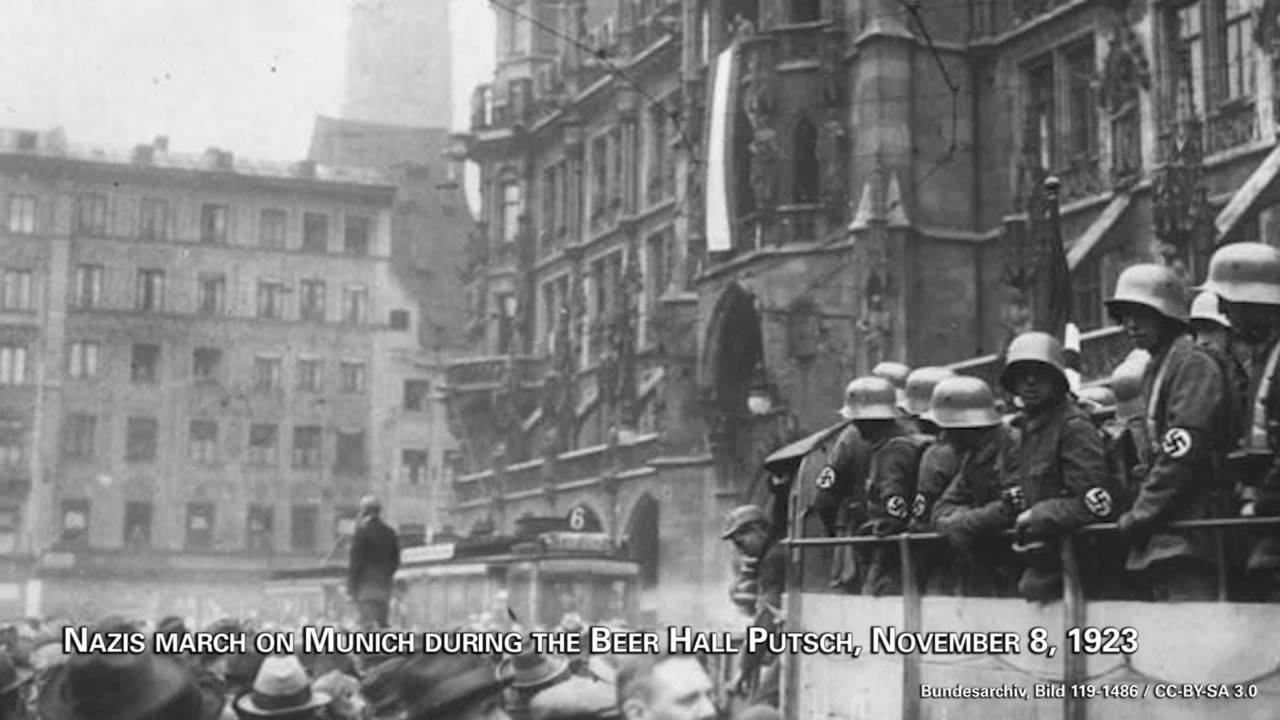 Most Germans did not expect their country to lose World War I. And many felt shocked and betrayed to learn that its leadership had surrendered. In the aftermath, German emperor Kaiser Wilhelm renounced the throne and fled to the Netherlands. As revolutionaries fought for control of the German capital of Berlin, a new government formed in a smaller city to the south called Weimar. Almost overnight, Germany had transformed into a democratic republic, which would be known as the Weimar Republic.

The collapse of the monarchy was very important because it created these power vacuums and this grab for power. And these disgruntled youth, hardened youth, came back into German society and Austrian society, and were very disillusioned, and had known-- their primary, formative years were in the carnage of the First World War, the Great War, the war to end all wars.

And so they come out of this experience and really bring that to the streets of Germany, to the political culture of Germany-- so that kind of combative spirit. A lot of the politicking that's occurring in Germany is in beer halls and in street fights. For a liberal society to function and a democracy to function, there has to be compromise. There has to be civility. And it's not part of that, the birth of democracy in Germany.

Adolf Hitler was among those youth who brought a combative spirit back to the new German democratic experiment. Hitler was an Austrian citizen who had volunteered to fight for the German army. He was in a hospital, recovering from a mustard gas attack that had left him partially blinded, when he learned of Germany's defeat. And he moved to Munich shortly thereafter.

Hitler was like hundreds of thousands of other Germans-- some of them in the army, some of them not-- in 1919-- disturbed by their nation's defeat, deeply unsettled by the political revolutions that occurred at roughly the same time, and looking for an answer. He found it in a political organization that already existed called the German Workers' Party. And he rapidly became a dominant figure in the movement because he had a gift for public speaking.

In early 1920, the party changed its name to the National Socialist German Workers' Party, or the Nazi Party for short.

It was a movement that offered him an explanation for Germany's defeat-- namely, that the nation had been sold out. That it was not his fault as a former soldier that Germany had lost, but rather seditious forces at home had undercut the war effort. And that explained why Germany had lost. That became the core of his message. And then attached to that was a particular statement that among those seditious forces were the Jews.

Traitors have betrayed us. That's why we lost the war. You need a scapegoat for that. The Jews were a scapegoat.

So that was the beginning-- that Hitler blamed this ignominious defeat on his political opponents. And then the peak of this early period of crisis-- from 1918 to 1923, Weimar was plagued with crisis-- was the hyperinflation.

In the great inflation of 1923, you need billions of marks to be able to get a loaf of bread. It didn't pay to work, because your money was losing value every hour of every day. And the entire middle class was wiped out.

It's not a coincidence that Hitler attempts to seize power in November 1923, the peak of the hyperinflation. And he sees this as an opportunity-- that Weimar has become so chaotic, the downward spiral has gone so far, that that's when he undertakes the Beer Hall Putsch.

Hitler and about 2,000 supporters attempted to stage a coup in which they took control of Munich. It ended in a confrontation which resulted in the death of 16 Nazis and four German policemen. And Hitler was arrested and charged with treason two days later.

The Putsch failed. He then was sentenced to jail. But he was treated in jail like a bit of a celebrity, and not treated with harshness, and not put away for a very long time. In jail, he wrote Mein Kampf-- my battle, my struggle-- which was his blueprint. He told us what he was going to do. And then he did it.

When he came out, he decided that he had to adopt a new and more effective political strategy-- one that did not involve challenging the authorities with violence. And he called this, actually, the legality strategy. He spent most of the mid-1920s building up the political organization of the Nazi Party. But it's important to note that, in 1928, at the German parliamentary elections, he got 2.6% of the national vote. In 1924, he had gotten 6%. He was a marginal political figure.

In the mid '20s, the Weimar Republic did very well. Unemployment rate went down, the inflation rate went down. It seemed like Germans were going to be able to move forward with some relative stability and prosperity. And then came the stock market crash of 1929. And that was the beginning of the economic disaster.

What, in a calmer time, would have disqualified Hitler completely from being taken into the world of acceptability at this point gained and triggered support from segments of the population.

Now, people knew what Hitler stood for, but they weren't quite sure what his priorities were. We now know, in retrospect, looking back, that Hitler was obsessed with two things above all-- removing the Jews from Germany-- and that became increasingly a murderous program, and he was obsessed with winning what he called living space for Germany in the east.

But up until 1932, that's not what he talked about all the time. Indeed, in the last three years, between 1930 and 1933, when Hitler's vote was rising the fastest, the Nazis downplayed their antisemitic rhetoric. And their rhetoric was, what's wrong with this country is the system. The system is broken. The system doesn't know how to fix what's wrong with this country.

In 1932, Hitler ran against the current president, World War I general Paul von Hindenburg. The Nazis won the largest share of seats in the Reichstag, at 37%, but did not get the majority needed for Hitler to become president. In a second round of voting, Hindenburg was able to gain a narrow majority of votes and retain the office.

A third of the electorate gravitated toward Hitler. But it was only a third. And he wouldn't have come to power if it had not been for this powerful elite around the president who said, you've got to pick somebody. Let's pick him. And he thus became the person that the president chose to make chancellor.

They believed that they could control Hitler in this way. They called him the drummer, and he was going to head the parade. And the existing elites were going to manipulate him and pass the legislation that they needed. And Germany would be saved-- at least saved from communism, from a Marxist dictatorship. And it's one of the great mistakes in all of history.

Get the Viewing Guide

Students examine the Nazi ideology of “race and space” and the role it played in Germany’s aggression toward other nations, groups, and individuals.
More Like This Teaching Resources Learning & Events
Most teachers are willing to tackle the difficult topics, but we need the tools.
— Gabriela Calderon-Espinal, Bay Shore, NY