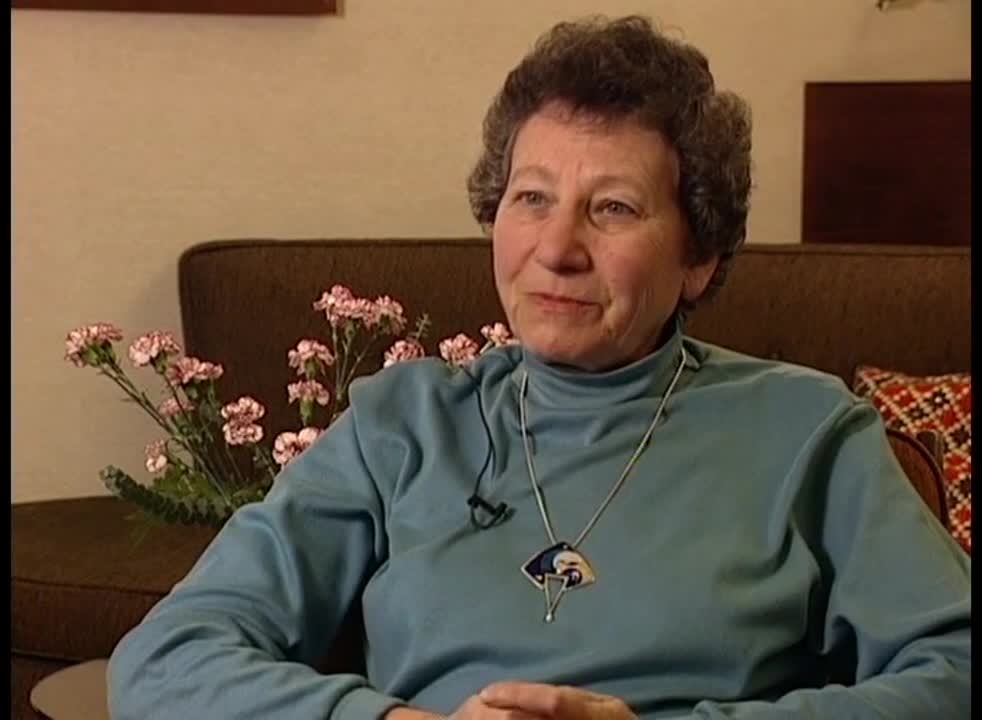 Do you recall Kristallnacht?

That is one of my most vivid memories. As I said, the school was right next to the synagogue. And I remember that the maid came in. And I guess we still had a maid in those days, though maybe it was an older person. She came in and said, the synagogue is burning. And this was November 10th. And I got up and got dressed and said, I don't believe it, whatever it was, though we had heard that this assassination had occurred in Paris. And--

Are you referring to Herschel Grynszpan?

That's right. But of course, the whole thing had been organized by the Nazis to have this reaction throughout all of Germany. This was quite obvious. But we didn't know that. We thought somebody had just started to burn our synagogue.

And my father said, well, I'll come with you just to make sure you're all right. And he and I and my friend-- we had the same-- she lived next door, and we went to school together. We went to where the school had been, and of course, the synagogue was burning. And the firemen stood by and watched it and mainly protected the houses around it.

And my father told us to go home immediately, and he ran to notify the rabbi, who, of course, knew about this. We were so naive that my father must have thought, well, I've got to tell the rabbi. But the rabbi knew about it. But he ran. And I remember people jeering because my father was running. And it worried me. I thought somebody was going to do something to him.

Well, my father actually-- when he got through with the rabbi, he went to Frankfurt, which was the nearest big town. Still is the nearest big town, but the town where there was an American consulate. And at that point, got the visa number for my grandparents because he realized this was the end. This was the beginning of the absolute end.

In Frankfurt, they were arresting people on the streets. Fortunately, they didn't know my father. So my father came home all in one piece for the time being. So we were just sitting at home. It was my grandfather's 77th birthday, and we were going to have a little family supper. And I remember distinctly distracting myself by decorating a potato salad. And of course, we were all, sort of, sitting together and trembling.

And I remember the crowds of school children who were being let out of school for the occasion, walking around, throwing things, invading homes, throwing things out of-- looting, throwing furniture out of the windows, cracking the windows. Just unspeakable invasions of people's private homes, and stores also, Jewish stores, stores owned by Jews. And the miracle was that my grandparents' home and my parents' home were not hurt. But I still have a visceral reaction to mob noise and crashing crystal. It's just never left me.

When I later on went to my grandparents' house, I saw part of the mob coming on the other side or the same side, and I crossed over and quickly walked the other way. Well, I told you about how we listened to the radio that night to see what the foreign media would say. And they were reporting it, but they were-- and then we realized that it was taking place all over Germany, of course. After my father came home from Frankfurt, he had seen it in Frankfurt, and he suddenly realized that it was totally organized and was taking place all over the place.

And the next day was a Friday. And on Friday nights, we always went to my grandparents for dinner and Shabbat. And now I have to say a few words about my grandmother. My grandmother had three sons, and two of them were killed in the First World War. So my father was the only survivor. She never got over this, of course. She and my father were very, very close.

And to get back to what happened the next day, they knock on-- the famous knock on the door, and the Gestapo was there and said to my father to come along. So my father threw a few things in a suitcase and came-- and wrote on the back of an English language teaching book, notify the cousins in America immediately, whatever they can do. This is no more time to say depression or what have you in America. We've got to have a way of getting out this country immediately.

And they took him along. So this was just before suppertime on a Friday night. And I said to my mother, what are we going to tell the grandparents. We were practically on our way to the grandparents to have supper with them. And I've told you about my grandmother. My grandfather had a heart ailment for years. And my mother says, nothing we can do but tell them the truth. We have to tell them.

She went in, and it seemed ages until she came back out, but she did go back out. And she said, it's all right. They're going to release him. And we said, what did you say? And she said, I told them, I gave two sons for my country. I demand-- she went to the Gestapo-- I demand my third one. And they said, It's all right, Frau Gaertner, er kommt. And we had gone just a few paces. And he actually followed us home and immediately took to his bed. And he said, if anybody comes, I'm sick.

But she actually saved him because he wouldn't have survived in a concentration camp. Frank's father went to concentration camp and never talked about it. My father was a very gentle person and very righteous, and would just not have made it. And so because-- and then we suddenly had an invasion of people whose homes had been destroyed-- my aunt and uncle, cousin, relative strangers. We took people in. They were all over the house because they had no place to go, and we had a functioning household.

So I remember several people, aside from relatives, who came to be with us and stay with us as long as they had to. And so that was basically my experience of Kristallnacht. I know that Jews had to go and clean up the mess that other people had made of their homes and of their stores, and then were fined in addition to that. That was the law, the Nazi law.

In this lesson, students explore moral and ethical frameworks in relation to teh actions of Frank Blaichman
Lesson
Add to Collection

Understand the many forms that Jewish resistance to fascism, antisemitism, and Nazism took.
Collection
Add to Collection