Connecting Students to Memorials via Arts/Makerspace

In this classroom video, students learn how to create art to memorialize those lost in the Holocaust.
Last Updated: July 29, 2018

Through an interdisciplinary hands-on art class, students create memorials to those lost during the Holocaust. Several students have personal ties to the Holocaust and share how their projects honor these connections. 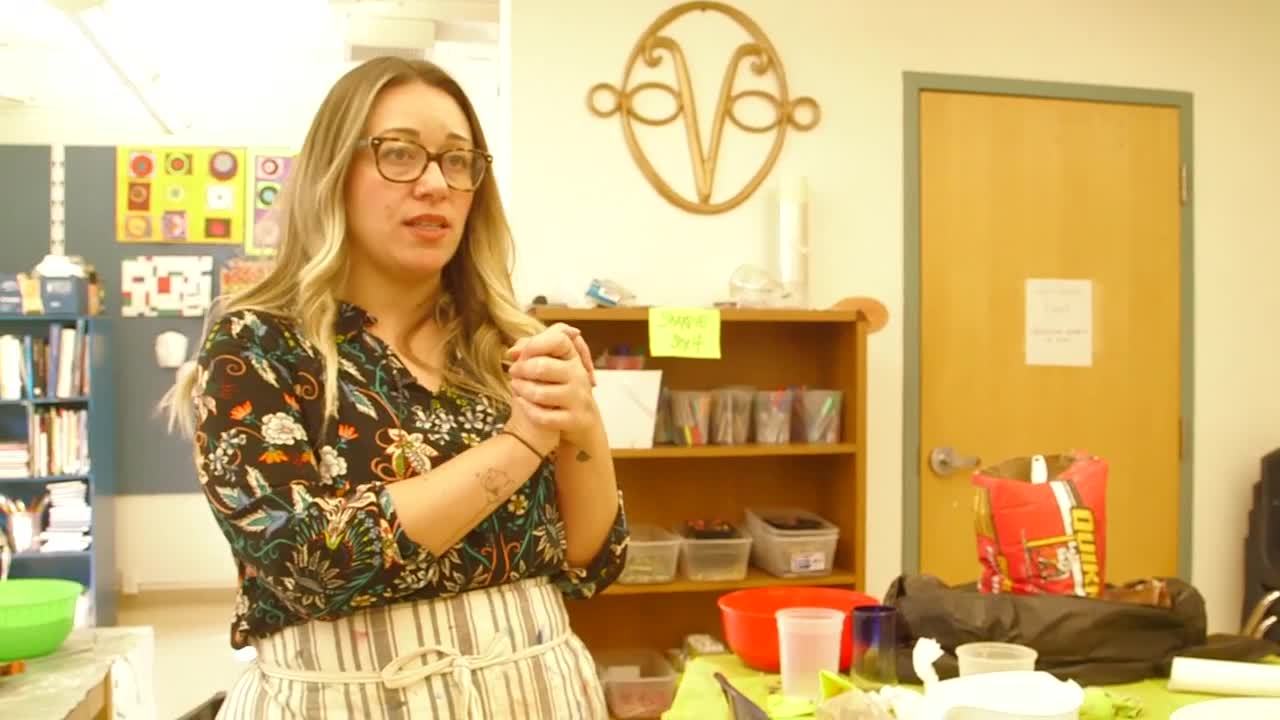 [SPEAKER 1] --makes the dry cement like kind of almost a powder with water, and that will make similar to liquid, almost like mud. [RHIANNON VAN BINDSBERGERN] For this project, we really got to start from scratch. [RHIANNON VAN BINDSBERGERN] Are you not-- I'll grab one. [MATT] I'll try [INAUDIBLE]. [RHIANNON VAN BINDSBERGERN] The kids had some understanding of what the Holocaust was, but not on such a personal level, which I think was really impactful for me that I got to open up something for students that was not in my typical everyday being an art teacher. And it's a good crossover for me. I love history, but this was a very personalized history for most of our students. They felt very connected when they watched video and photography and things. They were like, wait, they took pictures of this? It really affected them in a very different way, having that visual imagery, so I think having that kind of cross of the arts and history, and then now chemistry and figuring things out. We've had so many different ideas and prototypes coming through in the last two months, that we're finally breaking things down and deciding what this monument is going to look like for the school and for the community, and for these kids to really make that connection. They don't learn about the Holocaust until eighth grade, and so that's why I worked with the humanities middle school teacher. She has been helpful in collaborating with me. They had a hard time with a lot of the memorials and monuments that had this sadness. They're very positive, uplifting kids, so they're like, oh, everything's so sad. Why does it have to be so sad? And they thought, well, we wouldn't be here if it weren't for the fact that people survived, and there's this legacy that lives on. So they wanted that to be impactful for viewers, like we are here because we lived past something that was tragic and that we grow from that. And it can't be forgotten, it's going to be remembered, but that we're here and we're happy and we're moving forward. I've given them so far this year through Facing History a lot of content, so much content, they have so much context, they have so much research under their belt, that they really are leading this project into what they want to express to their audience. [MATT] Well, we're doing our research, but we came across a lot of sculptures that included hands. Everyone in our classes liked the idea. [RHIANNON VAN BINDSBERGERN] So each student has their own part of it that they're working on. So the clasped hands of Alyssa and her grandfather-- it'll be their clasped hands as a survivor. And then as her as the next generation that's going to carry that legacy of remembering. And then for the other students who don't have that immediate connection of somebody who's a survivor, they wanted their hands involved. So since two of our students have connections with survivors-- grandparents and such-- of the Holocaust, two of them want to have their hands clasped with their grandparent, which I think is really cool. So on that, it will have their two hands clasped. We'll do a casting of that. So that's their personal aspect. [ALYSSA] We're going to do my hands with my grandpa, then Matt's hands with his grandpa. My grandpa's a Holocaust survivor, and for me this means a lot because I'm learning many other stories. [MATT] Me and my grandpa are going to hold hands like that, like this kind of. And Alyssa and her grandpa are going to hold hands like that. It's kind of like from generation to generation is the meaning. Then the rest of the class is going to do hands like this, and we're going to have plants in it. [RHIANNON VAN BINDSBERGERN] They loved the Andy Goldsworthy Memorial and monument that has something growing from a stone, and so they liked the idea of having their hands open and that something is growing from it. So they really want this idea of life and moving forward. [SPEAKER 1] So the cement hands is like they were hardened. Have you ever heard the term "battle hardened?" Like, people who saw somebody die, they were hardened, they were broken almost. So something like cement, because that's hardened, literally, and then it's creating new life. The plants are growing from it. [ALYSSA] It's special to me to have my grandpa still alive with me today. It's still generation to generation. So I'm getting his story currently, so it's like I'm soon going to be the one passing on the story. Yeah, it's really cool to have us actually build something that I could take for my life that we need in honor of these people.

Educators will help students assess what they already know about a topic and what they want to learn.
Collection
Add to Collection

Get resources for addressing troubling antisemitic incidents persisting around the world today with your students.
Mini-Lesson
Add to Collection

This Mini-Lesson asks students to start the school year by designing their ideal learning space.
Teaching Strategy
Add to Collection

Help students identify and analyze the key characteristics of the three most common types of news articles.
Teaching Strategy
Add to Collection

Help students communicate independently and develop as active listeners by giving them the opportunity to discuss and share ideas in the format of a people's assembly.
More Like This Teaching Resources Learning & Events
Using the strategies from Facing History is almost like an awakening.
— Claudia Bautista, Santa Monica, Calif