Cassania, a high school student in Boston who emigrated from Haiti, tells the story of a pair of wooden shoes her grandfather gave to her as a gift.
Last Updated: April 19, 2022 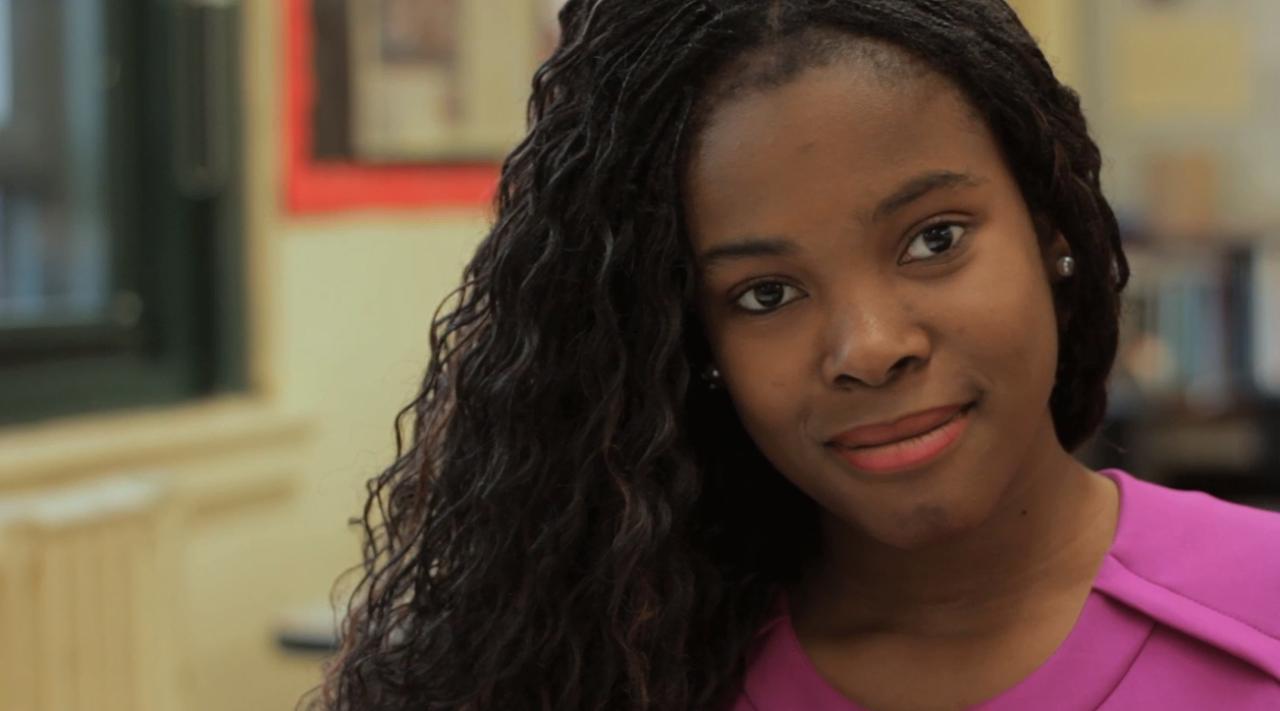 On January 12, 2010, an earthquake devastated the small island of Haiti. As the Earth shook, people were running all over the streets, trying to find a secure place. I saw a house that had fallen into pieces and plenty of people lying dead on the streets, some without a head, arm, or leg. My grandma and I had to leave quickly, so we only had time to take the most important things. I grabbed our cell phones. She grabbed a pair of yellow wooden shoes, and we went off.

Two days after my 10th birthday, my grandfather gave me a pair of yellow wooden shoes. They were the weirdest shoes that I've ever seen in my life. Aside from being yellow, they were enormous, shiny, and had large beaks. They also had flower designs on each side. They were very clean. Therefore, they always had the smell of an newly bought thing.

At first, I hated the pair of shoes because they weren't my style. They were not the kind of birthday gift that I wanted. When he gave me the shoes, I accepted them, but it wasn't a sincere acceptance. I threw them under my bed and went off. How could a 10-year-old girl love a weird pair of yellow shoes?

However, my grandfather never gave up. He was extremely persistent and wanted me to know the story behind them, which he was really proud of. My grandfather, Fanis Juslon, was born in the Dominican Republic. When he was just 17 years old, his parents and him moved to Haiti. This wasn't easy for him, but grandpa Fanis was strong enough to carry his own weight.

He was extremely strict with his family. But when he was with his friends, he was eager to have fun. He was compassionate, loved without the limits, and appreciated even the smallest things in life. My grandpa used to live in the rural areas of Haiti. There was always a big lack of money in the family. About a year or so after my grandpa got married to my grandmother, Leonie Camille, things weren't going as well as he planned.

Their three children were getting seriously sick, so every day for 15 years, he worked three jobs. He has worked as a salesman, but his primary job was being a comedian. He enjoyed entertaining people. He used to wake up at 5:00 AM every day, put his wooden shoes on, and then go tell stories or act in a play for a certain family. Even when he got paid little money, it was enough to put food on the table for his family.

After hearing this intriguing story, I broke into tears. I went to my grandpa and gave him the biggest hug ever. He worked so hard to provide for the woman that he loved. I decided to use the shoes for my project. I was so excited. I went home and asked grandma about the shoes. But she did not answer me. She looked as scared as my cat Mickey whenever he hears a thunderstorm.

She has an innocent look. But whenever she does anything wrong, you will always know because she looks nervous. Having the feeling that she didn't hear me, I asked her the question once again. And that's when she told me that the shoes disappeared. I couldn't believe my ears. I was frustrated. I asked her, how come you never told me this before, poukisa? Why?

Grandma replied, I didn't want to see the reaction that I'm seeing right now. But grandma, what happened? When did this happen? Pale avek mwen! Talk to me, I said angrily. She responded, calm down, honey. One question at a time. Tears started coming down her eyes. Her crying was contagious. I wanted to cry, too, but I couldn't because my anger was stronger than my tears.

I never truly know why Granda Fanis gave me the yellow wooden shoes. After what I had to go through, I realized that a gift is not about its physical appearance, but about how meaningful it is to you. Although the shoes aren't physically with me, they are mentally a part of me. They remind me of all the sacrifices, struggles, and effort he made to provide for his family in a country where you have to be thankful and appreciate everything given to you. When a gift is so important, such as the shoes are to me, the only way that I can express myself is by writing about it.

This Mini-Lesson uses images and firsthand accounts of Haitian migrants to humanize the events happening at the US–Mexico border and give shape and nuance to the news.
Mini-Lesson
Add to Collection

Teaching about the Ukrainian Refugee Crisis

Use this Teaching Idea to introduce students to the experiences of Ukrainian refugees fleeing war, highlight inspiring ways people have stepped up to help, and raise ethical questions about the treatment of refugees from non-European countries.
Lesson
Add to Collection

In this Mini-Lesson, students reflect on stories of migration and learn about migration from El Salvador to the United States as a means of exploring the underlying factors that drive migration.
Lesson
Add to Collection

Created in partnership with Girl Rising, this lesson invites students to engage with the story of a young refugee and to consider the power of storytelling to spark empathy.
Mini-Lesson
Add to Collection

In this Teaching Idea, students gain insight into migration and the systems surrounding migrant detention by considering the perspectives⁠ of migrants, an immigration lawyer and advocate, a border guard, and an immigration judge.
Mini-Lesson
Add to Collection

Use Poetry To Teach About Identity

Celebrate National Poetry Month with these teaching ideas that use poetry to help students grapple with the complexities of identity and inspire them to tell their own stories.
More Like This Teaching Resources Learning & Events
Using the strategies from Facing History is almost like an awakening.
— Claudia Bautista, Santa Monica, Calif