Propaganda during World War I: An Appeal to You!

Journalist, lecturer, and author Adam Hochschild discusses the use of propaganda during World War I.
Last Updated: April 14, 2022 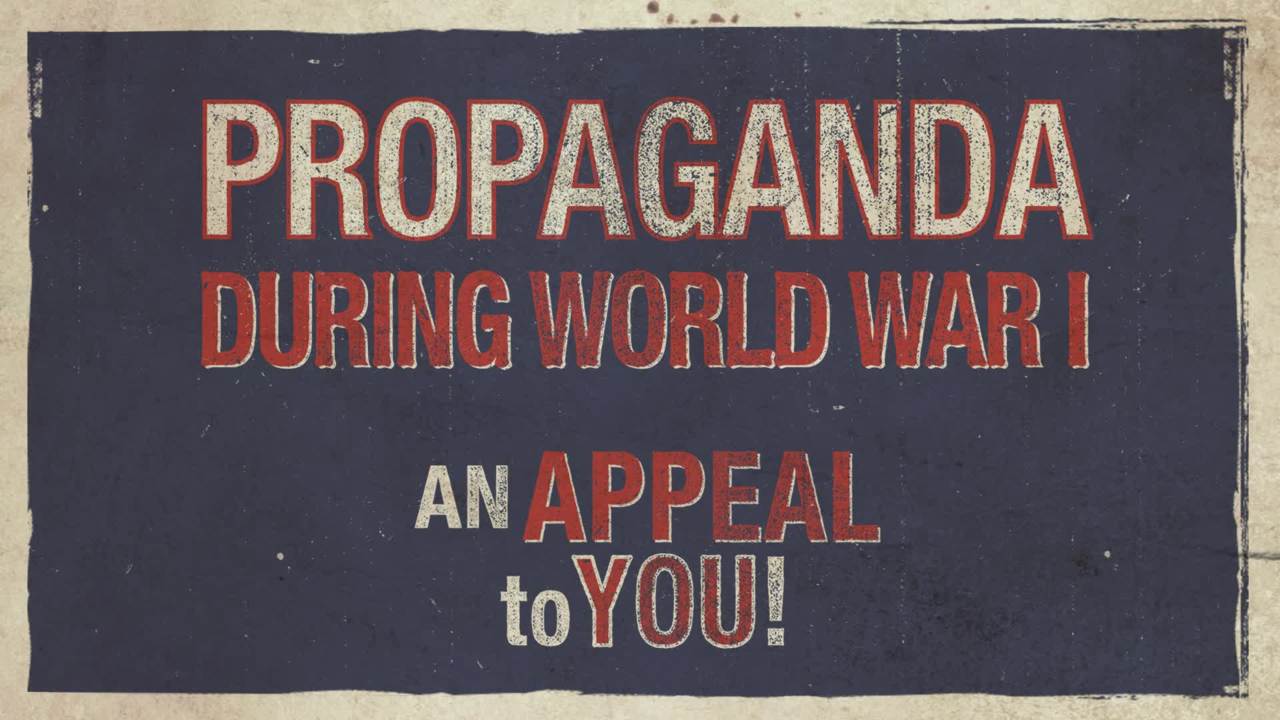 In 1914, Europe's kings and emperors had the power to declare war. But they still needed the public on their side.

One of the things that made this war different from almost all the ones that preceded it was that propaganda was a huge part of how it was fought. Because the war lasted so long, four and a half years, and because the civilian population was so deeply involved, producing on an industrial scale, they had to get people's enthusiasm whipped up.

Propaganda manipulates facts and information to create a desired response. Often appealing to emotions, such as fear, pride, and prejudice, its goal is to influence people's thoughts and actions. Even before the war began, propaganda was used to arouse certain feelings towards other countries.

When Serbian nationalist Gavrilo Princip assassinated Archduke Franz Ferdinand of Austria, Europe was primed for conflict. Austria presented Serbia with a list of demands, among them outlaw all anti-Austrian propaganda. But the stage was set. Days later, Europe was at war. Now the battle for hearts and minds began in earnest.

Nowhere was this more true than Britain. It was because Britain itself had not been attacked and there was a lot of feeling, right up till the last minute, that Britain shouldn't join this war. Let those continental powers fight it out among themselves. In fact, two junior members of the British cabinet resigned over the issue. There was considerable feeling in England that we shouldn't be a party to this.

The pro-war faction went to work.

They produced an enormous array of war posters, whipping up enthusiasm, calling attention to the atrocities that the Germans had committed in Belgium. The Germans did commit a lot of atrocities in Belgium, but they were further exaggerated for propaganda purposes.

Even lifelong pacifists, like Bertrand Russell, Britain's most famous philosopher, found it hard to resist. England entered the war on August 4, 1914, when Germany invaded its ally, Belgium. Now the Crown faced an even bigger challenge. They needed to convince millions of men to enlist, because in 1914, Britain's army was all volunteer.

The British government felt a strong propaganda effort was needed. And they moved on many different fronts. They produced posters, postcards, calendars.

In 1914, the British government decided to up the ante and create a war propaganda bureau.

Only about a month and a half after the war began, they brought together some 50 of Britain's most prominent writers, including Thomas Hardy, Sir Arthur Conan Doyle, James Barrie, a number of other people, probably the most illustrious gathering of British writers ever to take place. And they said, we would like to ask you folks to write patriotic stuff for the war effort, poetry, plays, novels, whatever you want. We'll see that it's published and we'll see that copies are sold.

[SINGING] Keep the home fires burning while your hearts are yearning. Though your lads--

Popular songs connected soldiers with loved ones back home, while the messages reinforced national unity. Each side was determined to win the propaganda wars. The goal was to portray the enemy as evil aggressors and to establish themselves as the true defenders of honor, justice, and morality.

To do this, they aroused emotion using age-old stereotypes, both positive and negative. The war itself is glorified as a crusade against those who would threaten cherished values. And specific events were manipulated to raise funds, support, or morale.

One such event was the sinking of the Lusitania, which led to mass outrage and one of the most evocative posters of the war. Another was the case of Edith Cavell, a British nurse executed as a spy. In the months that followed her death, the number of volunteers doubled.

But as the war dragged on and the death toll mounted, the spin doctors faced a new task-- maintaining public support. When their aims changed, so did the message and the medium.

Film was the exciting new medium to use to reach a large audience. The best example there, I think, is the film The Battle of the Somme, which was made about the battle generally known by that name. It took place in the middle of 1916. The government took something of a risk in deciding to allow filmmakers to film dead and wounded soldiers, which was something that usually in earlier films had been sanitized.

But the film turned out to be a tremendous hit. It did show dead and wounded soldiers. But it also showed lots more scenes of men doing ordinary things, receiving mail from home, and cooking their meals, and feeding and watering their horses, and so on, all these things that were familiar to the folks back home.

And the estimates are that a majority of the population of the British Isles saw this film. It was such a success that the Germans got wind of it and produced a Battle of the Somme film of their own. So film became a very powerful medium.

Propaganda during World War I was so effective that its influence reached far into the future.

Here, I think we have to look at exactly how the war ended. By late 1918, the German military knew they were defeated. The Allies were steadily gaining ground in the West. German soldiers were starting to desert, not at the front line, but from the rear, in quite large numbers. The generals knew they had lost.

Meanwhile, the German people continued to receive a barrage of triumphal propaganda. And indeed, six months earlier, the German army had been almost at the gates of Paris. So it was quite easy to believe that any setback might be temporary. Then the war ended.

It was called an armistice, but it was really a German surrender. And in the weeks to come, it gradually sunk in on the German people that they had lost. This produced immense bitterness. And was such a fertile field for Hitler to come along and say, you know, we were on the verge of winning this glorious war, but then we got stabbed in the back by communists, and pacifists, and Jews.

The messages of World War I would come back to haunt Europe just a few years later.

Facing History and Ourselves, “Propaganda during World War I: An Appeal to You!,” video, last updated April 14, 2022.

Influence, Celebrity, and the Dangers of Online Hate

Explore questions around the power of social media influencers and consider who has the ability to counter online hate.
Mini-Lesson
Add to Collection

Where Do We Get Our News and Why Does It Matter?

Use this Mini-Lesson to help students reflect on their emotional reactions to climate change, their connection to the natural world, and the power of collective action.
Mini-Lesson
Add to Collection

This Teaching Idea on the Capitol insurrection invites students to reflect on how seemingly small choices made by individuals can contribute to larger acts of injustice and violence.
Activity
Add to Collection

Students explore the supporting question "How should we remember the nation’s founding?"
Mini-Lesson
Add to Collection

This Mini-Lesson invites students to explore how their actions and the actions of their leaders can help promote the common good in a time of crisis.
Lesson
Add to Collection

This unit is designed to help teachers have conversations about race with their students in a safe, sensitive, and constructive way.
Collection
Add to Collection

Teaching Resources for the US Elections

Use these resources on voting, media literacy, polarization, and bias to talk about US elections with your high school and middle school students.
More Like This Teaching Resources Learning & Events
Most teachers are willing to tackle the difficult topics, but we need the tools.
— Gabriela Calderon-Espinal, Bay Shore, NY