The Nazis in Vilna

In his testimony for USC Shoah Foundation, Holocaust survivor Jack Arnel describes what he saw as a 12-year-old when the Nazis occupied Vilna, Lithuania in 1941.
Last Updated: April 18, 2022 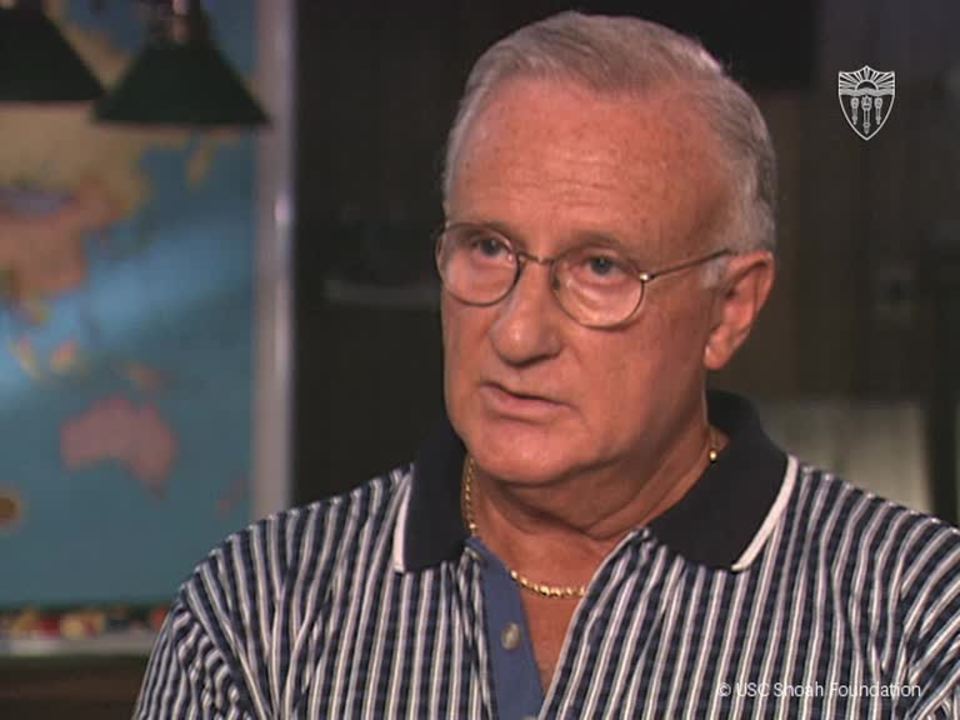 It died suddenly. We heard all these explosions, and my father jumped out of that and got out to speak to the neighbors and all that. And we knew that they were-- that the Germans are attacking because we saw also some of the Russian soldiers running in our streets. And as a matter of fact, they were in such a disarray, and they were actually escaping from the German attack.

So the next morning, we got up. It was silent. It was quiet. And I went down into the courtyard, and I saw some of my friends-- the Polish boys that were very close friends of mine-- we walked out in the street a little bit further. And suddenly, a German motorcycle-- on a motorcycle, three Germans were-- it was with a cab that they had on the side. And they had machine guns on their backs. Stopped in front of us-- we must have been maybe six or seven boys altogether. I was the only Jewish boy.

How old were you then?

And my friends-- they didn't understand any German, but since I spoke Yiddish, I was able to understand what they were saying. So one of the Germans said to them-- in German, he said that alle Juden will be killed-- that all the Jews will be killed. Well, I felt a tremendous weakness in my knees. And as they stood there talking, I just walked away quietly.

And my mother and my father came to me trying to console me, to try to help me. And I just kept asking, why did they say that? Why? It just blew my mind. I couldn't understand it.

And so the real tragedy has begun. The tragedy of-- as a 12-year-old, I was rather young. I was brought up in a protective environment. It hit me like an atomic bomb. I just could not believe the things that have developed in there. And it had weighed a tremendous burden on my mind and on my heart.

Did the Germans immediately occupy Vilna right after that?

And what was the first thing they did that you remember?

And the first thing they did was an order that all Jews must wear the yellow badge with a J inside inscribed-- one on the front, and one on the back. That was the very first indignation that was to separate us from everybody else, that was to insult us-- to most importantly, to have control over us.

In this lesson, students explore moral and ethical frameworks in relation to teh actions of Frank Blaichman
Lesson
Add to Collection

Understand the many forms that Jewish resistance to fascism, antisemitism, and Nazism took.
More Like This Teaching Resources Learning & Events
The resources I’m getting from my colleagues through Facing History have been just invaluable.
— Claudia Bautista, Santa Monica, Calif