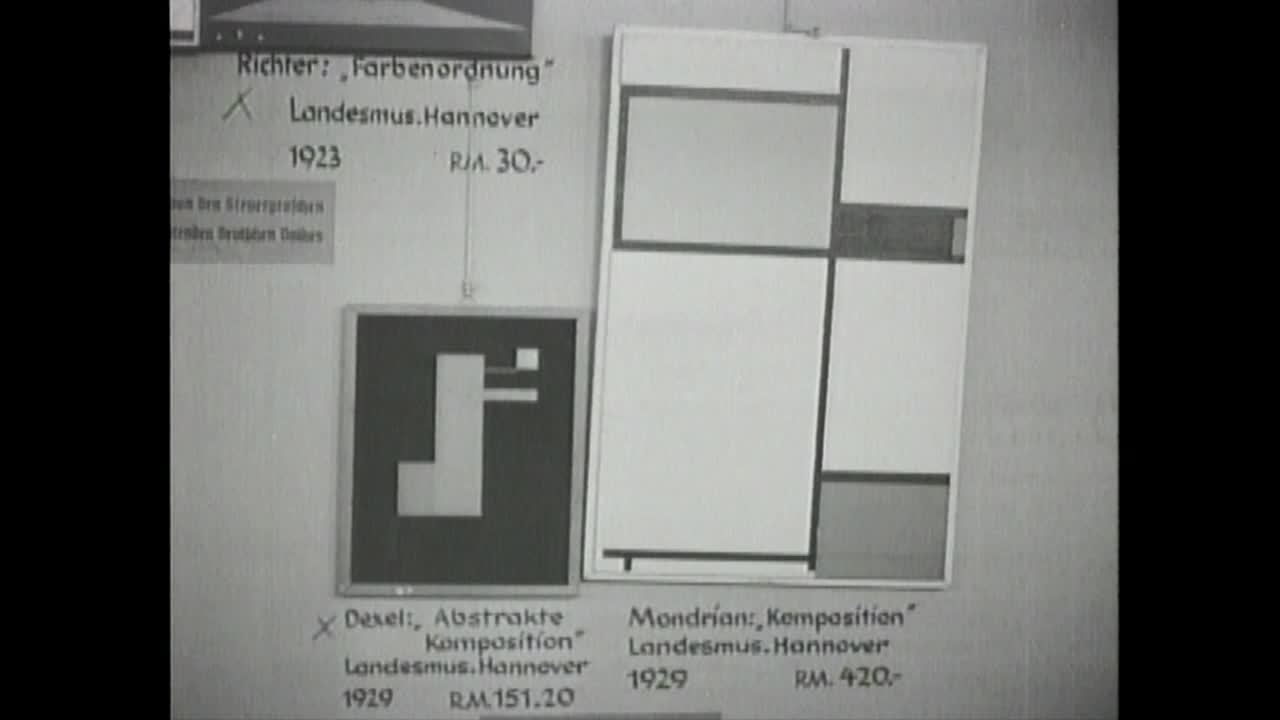 One could argue that the Degenerate Art Exhibition, which opened in Munich in July 1937, was the most important cultural event in Nazi Germany. And it was that for a number of reasons.

One, it became a traveling exhibition that toured Germany-- Berlin and then down to Vienna, once Austria was part of the Third Reich. And over two million people saw the exhibition, making it the best-attended art exhibition for many years, for many decades to come. I mean, it was a huge propaganda spectacle that attracted these millions of people, and really mobilized a lot of people in Nazi Germany.

And second, it came at a crucial junction in time-- 1937. And I think it's important to realize that Nazi Germany was not a static place. That in 1933 it was not a totalitarian dictatorship. It took time for Hitler to indoctrinate the German public, to radicalize the policies. And 1937 was really a turning point.

And before that, up until '37, it looked like there might be a place for modern art in Nazi Germany. There were a number of Nazi leaders like Joseph Goebbels, the propaganda minister, who thought that German expressionism should be accepted in the new Germany. Goebbels looked at the German expressionists, members of the Blue Rider and Die Brücke-- The Bridge. These were very important modern art groups.

And he said, this is an area of German accomplishment. We should celebrate this. But with the Degenerate Art Exhibition in '37, we see how important Hitler was in making policy.

And I think it's important, not just to understand Hitler's role in the Nazi state, how he would settle these debates between sub-leaders, but also his rationale, the way he thought about these issues. And the rationale behind Degenerate Art, or as the Germans call it, Entartete Kunst, is very telling of the Nazi ideology.

On the one hand, Hitler said if you like modern art or if you produce modern art it means that you're either politically subversive, or biologically --racially-- inferior. And by the former, politically subversive, the phrase that he often used was "cultural Bolshevism." It was the idea that this art was not a national art. It was not rooted in one people, ein Volk in German. But instead, it was an international movement.

But more importantly I think, was the notion that if you made modern art you didn't see colors as they truly were, shapes as they were. And that it really reflected a physical deformity, a physical defect. And in Hitler's mind, modern artists were linked with being Jewish in many ways, and with being racially inferior.

Of course, most of the modern artists were not Jewish. But in Hitler's mind, and his distortion of history, he saw modern art as a racially inferior art.

And again, with the Degenerate Art Exhibition it's so poignant because you see the negative, aggressive, antisemitic political attack of modern art juxtaposed with the propaganda, the positive of the Great German Art Exhibition. Because there are certain key elements of Nazi art. One is its size. It's not like Hellenic or ancient art, which has a sense of balance, and proportion, and harmony. Nazi art is gargantuan. It's gigantic. It dominates the viewer. It's just not human.

And again, it says something about the state, and about the Nazi regime-- the way it dominated people.

And a second element is how racial the Nazi art is. We see these muscular Übermenschen-- superhumans. And oftentimes the muscles are strained in battle in some ways. There's a militaristic theme to it all.

But sometimes you see the figures at rest, oftentimes with women, with female figures. Because there were gender roles that were communicated in the official German art. Women were supposed to be bearers of children, were supposed to provide a peaceful domestic setting, even as their husbands went off and fought and murdered and such.

And one thing that's rather interesting is that the culture and the propaganda oftentimes deviated from the reality of Nazi Germany. Women actually went into the factories in the work-place. Women were mobilized for the war effort.

The wealthy in Nazi Germany got wealthier. The peasants had a difficult time. It was completely contrary to the propaganda message of the regime, which was that they were going back to traditional society with traditional gender roles. And the peasants and small farmers were being taken care of, and on and on.

And up until the early 1930s, most German people didn't have a lot of experience with culture and with media. The Nazis came along at a very particular time in the history of technology and media. And so they took advantage of this new technology, such as talking films, such as the radio broadcasts, such as newspapers that could be printed and distributed, mobile cinema vans that would go to a small town and set up a movie theater in the town square.

And the Nazis exposed more people to culture, hence propaganda, than any regime up until then. And one really sees with this with the Degenerate Art Exhibition. It's a very seductive, very nefarious kind of propaganda.

They hired actors to mix with the crowds, who would state very loudly, very ostentatiously, look at this disgusting filth. Isn't this horrible? And these actors would mix in, and try and incite the crowd in this way. And that's how thoughtful, or clever, or devious the Nazis were.

And it took six years of propaganda before the German people were really ready for this aggressive war of conquest. And it's a gradual process. And propaganda, indoctrination are absolutely central to the history of the Third Reich.

Influence, Celebrity, and the Dangers of Online Hate

Explore questions around the power of social media influencers and consider who has the ability to counter online hate.
Mini-Lesson
Add to Collection

Where Do We Get Our News and Why Does It Matter?

Students engage with an intriguing image that lacks context or a title, drawing on their close viewing and analysis skills.
More Like This Teaching Resources Learning & Events
Using the strategies from Facing History is almost like an awakening.
— Claudia Bautista, Santa Monica, Calif