Teaching The Children of Willesden Lane: Introducing the Universe of Obligation, Middle School

Teacher Sheila Huntley leads a discussion on the concept of a universe of obligation.
Last Updated: April 15, 2022 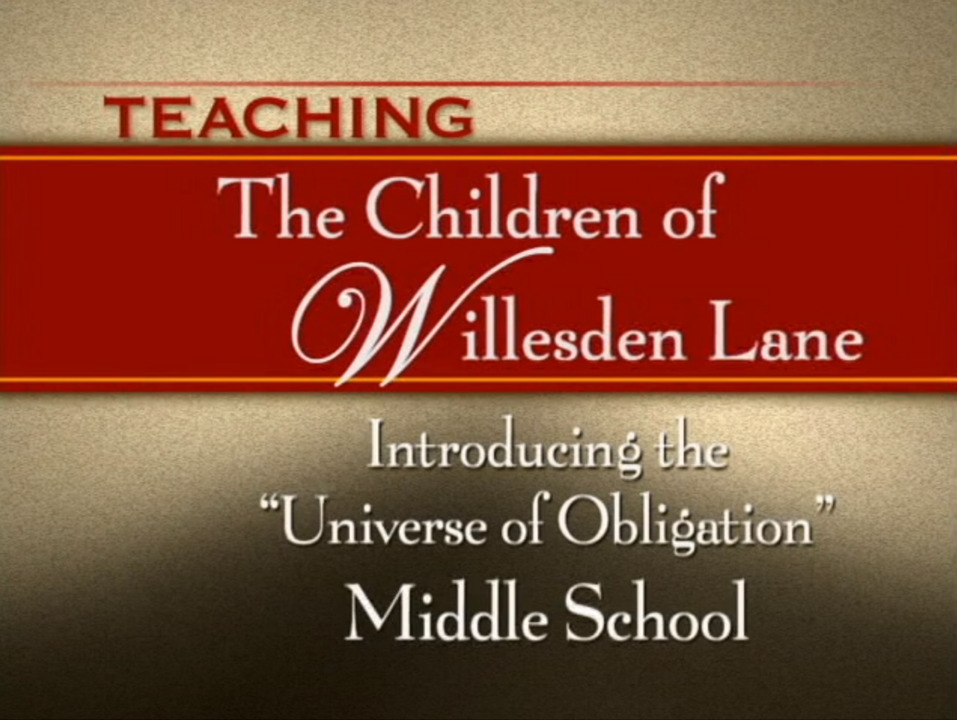 We've been discussing the Holocaust. We've talked a lot about it. As you know, the importance of learning anything in school is so that you can apply it to your own life. And that's what we're going to talk about today.

Now let's talk about the word outsider. You all gave-- some of you gave stories about when you were outsiders, or you felt like you were outsiders. You came into a place. And it's like it was a little circle. We're sitting in a circle now.

But what if we took Camelia, right here, and we just took Camelia, and we say, all right, Camelia, we want you to leave our circle? Is that being the same as an outsider?

Or would it be more of an outcast?

I wanted them to understand the difference between an outcast and an outsider, and get them to start thinking about the people that they're around, and how they come in contact with them, and the consequences of their actions and words.

By Eve Shalen, "My eighth grade consisted of 28 students, most of whom knew each other from the age of five or six."

In the teacher's resource for The Children of Willesden Lane, they had a wonderful passage by Eve Shalen. It's not a very long passage, two paragraphs. And it was perfect for what we've been talking about.

"One of the popular girls in the class came up to me to show me something she said I wouldn't want to miss. We walked to a corner of the playground where a group of three or four sat. One of them read aloud from a small book, which I was told was the girl's diary. I sat down, and laughing till my sides hurt, heard my voice finally blend in with the others."

It was a beautiful example of the outcast, outsider. It tied real people into a real-life situation that we'd just only been thinking of theoretically. And I think that hit home with a lot of them.

"Often, being accepted by others is more satisfying than being accepted by oneself, even though the satisfaction does not last. Too often, our actions are determined by the moment." Take a moment and think about that. Think about how you felt when I read this. Did it make you feel something, or not? Could you relate, or not?

I think I could relate to what is happening because I used to do certain things. But I didn't know why. I guess I want to fit in.

Thank you for sharing that, Darnell. I bet that was hard to admit that you treated people that way. Good job. I'm proud of you.

I think when you was reading the story to us, I can relate to it because it happened to me in fourth grade.

When you're having conversations like this one, when the children really start bringing out their feelings, and sharing things that are very difficult, really, for them to share, I think it's very important to allow them to say that if they want to say it. And it helps them to incorporate into their own psyche, these lessons.

I had a topic to discuss.

The topic I would like to discuss, in the story, it says, "In most cases, where children get picked on, they aren't good at sports, or they read too much, or they wear the wrong clothes, or they are of a different race. But in my class, we all read too much, and didn't know how to play sports."

I think it shouldn't matter about how we look on the outside, or what kind of sports we play, or whether we read too much or not. I think it should be about our potential and smartness.

So you're saying they should--

--and the way we treat each other, instead of how we look on the outside.

Good. But I want to add one more thing to what you read. And that's the next sentence, that it said, "This is what was so strange about my situation." What was so strange is they were all alike. None of them played sports. They all read too much.

That's really interesting. If they're so much alike, why pick on anybody? There was a sentence in here that I read, "But in my class, large differences did not exist. It was as if the outcast were invented by the group, out of the need for them." What do you think it means that there was a need for it, and that's why they invented it?

I think it means that they just wanted to get a laugh out of it. They need to-- I think they wanted to make somebody laugh for-- they can think the other people are not like them.

I think the children picked on each other just to make themselves feel like a bigger person.

Make them feel better, then?

Oh, a lack of confidence, so they're trying to feel better? That's a good observation. Now I want to talk to you for a few minutes. You all did a great job discussing this passage. You really did. But right now, I want us to look at this other sheet of paper that we have on there.

The top of this paper says "the universe of obligation." What is an obligation?

I think it means something that you don't want to do. But you got to do it.

How many of you have younger brothers or sisters?

I had a younger brother too. And when they're little, sometimes our parents expect us to look after them.

We look at that as a responsibility, correct?

That is an obligation. Now on your sheet, there is a quote. And this quote is from a woman by the name of Helen Fein. She's a scientist that works with people. She's called a sociologist. And Helen Fein. Writes this quote, "The circle of individuals and groups toward whom obligations are owed, to whom rules apply, and whose injuries call for amends." Would anybody like to share what they think she means by these words?

I think it means toward home responsibility are owed.

Is owed? All right.

To bring about healing?

To bring about healing.

In the center of this circle that you have on your desk, here's what I want you to do. I want you to create your own universe of obligation. In the center, you're going to put who you feel mostly obligated to. It could be yourself.

It could be a younger brother, or sister, or a parent.

In the middle I put Lakisha because that's my little sister. That's my responsibility to watch out for her, and to find things that she's missing, and make sure that she's all OK. And then further out, I put it-- before that, I feel my mother because it's my responsibility to make sure that she is all right in any kind of away. And if she's got [INAUDIBLE] I can find out what's wrong and try to help her seeing what's right.

And far before that, I got Miss Huntley because she's my teacher. And my responsibility to listen to her and learn things.

Well, let's bring this back to what we've been learning. What we're going to be studying is a book, The Children of Willesden Lane, by Mona Golabek and Lee Cohen. You've heard me mention this book to you before.

When you read this book, what you're going to find out is, the further we get away from the center of our universe of obligation, the consequences, as you said, change. And when the consequences change, our behavior changes. And those consequences of how we treat those people can be very, very devastating and dangerous.

As we study The Children of Willesden Lane, I intend to refer back to today's discussion on the universe of obligation because I think it's important for them to associate their universes of obligation with what's going on in this book, with these children. One of my major goals, as a teacher, is to teach children that they can make a difference in their world. And as their world gets bigger, as they grow older, they can make a bigger difference.

In this lesson, students explore moral and ethical frameworks in relation to teh actions of Frank Blaichman
More Like This Teaching Resources Learning & Events
The resources I’m getting from my colleagues through Facing History have been just invaluable.
— Claudia Bautista, Santa Monica, Calif