Teaching about Segregation and Its Consequences: Examining Plessy v. Ferguson

In this lesson, Ms. Forton first asks students to respond to the following prompt in their journals: What does equality mean to you? Does it mean equal treatment under the law, equal opportunities, equal education, or something else? The video begins after Ms. Forton has distributed the reproducible “What the Court Decided,” which contains the court’s decision in Plessy v. Ferguson. 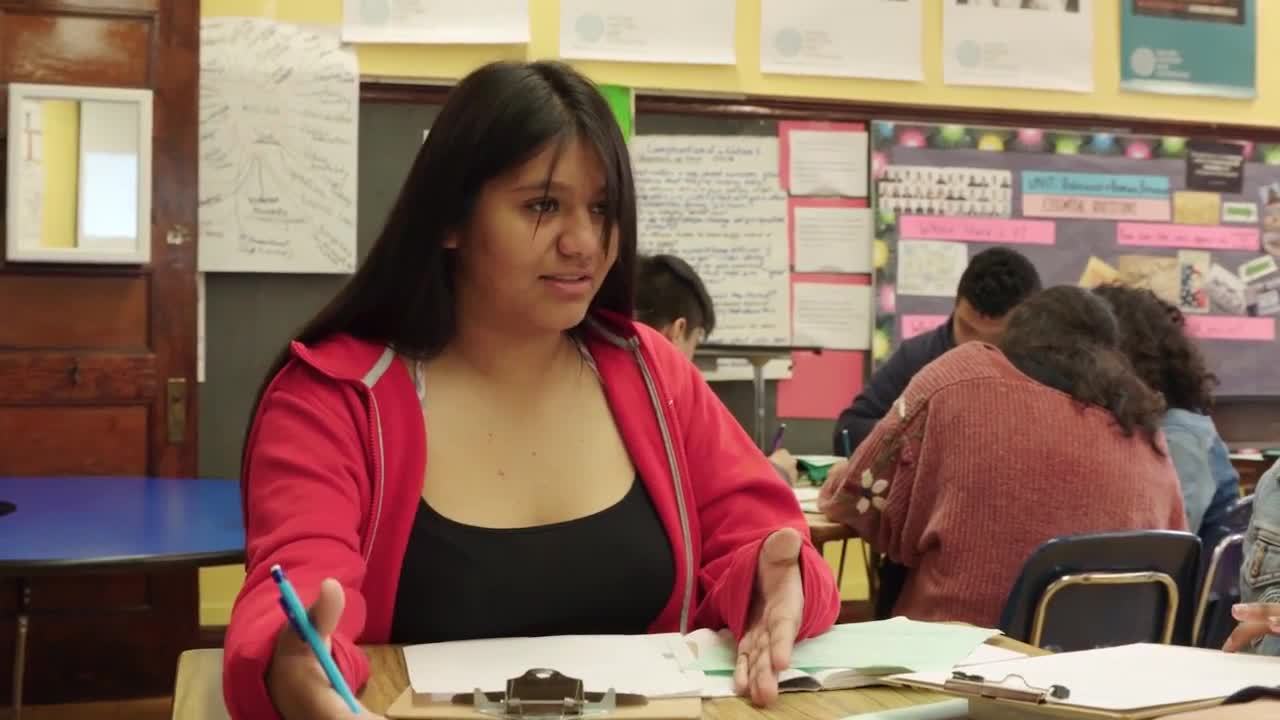 We're in the fourth quarter of the school year where they've had Facing History curriculum for almost two complete years at this point. We've done elements of the Choices in Little Rock unit. Facing History means to me being courageous about looking at our past in a reflective, honest way in order to inform our future.

It is looking at facts and looking at primary sources in order to use our own critical thinking to discern the role that history plays in our life today. Students, specifically middle school students, are very aware of the feeling of fairness, this feeling of things being unfair. I think because of that, they're able to analyze equality in a way that's more fresh than most adults, and I think that they're able to look at primary sources in a way that they can apply that to their own experiences. When they analyze it in history, they're able to analyze it for themselves.

Essential questions for units that are entirely, What is equality? And what is freedom? And the process of defining those terms, is something that helps students just to analyze what is the very nature of those words. Analyzing the difference between equity and equality and the role that both play in our society and the role that both play within equality itself-- I think is a reason I keep coming back to those questions is because they do have that fresh view on it and then are able to use it for themselves.

So I want you all to go back, actually, to the sheet yesterday titled The Dispute in Plessy v. Ferguson. Take a look at number 2. Think about how you decided if this amendment allows states to pass segregation laws. Did-- bless you-- did this idea of equality or concept of equality factor in at all to your decision? I want you to just read.

Well, that most of the Court agreed with that view.

So unconstitutional or constitutional, most of the Court agreed with that view. Exactly. And what could dissenting opinion mean? Cadence.

To go against. Exactly. So the minority opinion is going against what opinion?

Exactly. Nice. So at your table, you can decide how you want to approach it. I do want this text read out loud. And you will be working on analyzing those three sets of questions.

So it could be if a table decides like, oh, Emily's going to read the whole thing 'cause she's really feeling reading today, go for it. But if you want to switch off, go for that as well. Make that decision. You should be marking up the text as you read with annotations. Ready, go.

Nice job marking up the text.

But what does he mean by colorblind?

You know when you're colorblind, you can't see colors?

The last question it says, Should the Constitution be colorblind? No. You need to be able to be open to see different lens and different people's perspectives.

It's like if you don't see me for my color, you don't see the struggles that you guys put me through. And that's the thing like how we worked on with the glasses, you should be able to be opened up to different people's experiences and have some type of empathy.

You do not have to have full perfect sentence responses in these boxes. This is simply for notes for you. This is what we are going to be talking about in Fishbowl seminar. So put notes for yourself here using evidence from your marked-up text. Go.

So when it says the white race deems itself to be the dominant race in this country, it's again-- it implies segregation and inferiority clearly because the first paragraph, it said, Laws permitting, even requiring, your separation in places where they're liable to be brought into contact do not necessarily imply the inferiority of either race to the other. And it's like a conscious contradiction. So here it's saying that it doesn't, but then here it's clearly like it does.

And then it says on the 14th Amendment clearly that all persons, to any person within its jurisdiction to have the equal protection of the law. So they all have the right to equality. So, yeah, so I think we should annotate to the fact that it says it right there. They're literally contradicting from it.

And also I feel like the majority is oftentimes the people that are making the decisions that aren't often applicable to only the majority and not much the minority. So it's not-- to connect that to what we were doing with the quick write about equality. It doesn't really connect to this idea of equality.

So you're saying the state has the right to do the segregation?

Because they're trying to say that it wasn't in the Constitution.

The confusing part though is because here it says, No state shall make or enforce any laws which shall abridge the privileges--

Yeah-- but that shouldn't be-- yes, exactly. So that's not necessarily a confusing part. That's you getting it. But that's you saying that you actually disagree with what the--

What the Court is saying.

Yeah, and what the majority opinion was. So you actually probably more agree with this.

You're not confused. You get it.

The "what the courts decided" activity was so important because it's so relevant to today, these structures that are set up in our nation of court systems, of the Constitution, of amendments, of the Supreme Court, are things that students still see actively in the news. And it's important for kids to begin to see how the structures impact the function of our country and of their lived experiences. And so I think it's important that students have evidence to go to to validate their own experiences.

So at a human behavior-- at a human connection level, I think that's why it's so important. At an academic level, the literacy skills that they're using in order to attack and tackle these very difficult texts is necessary in their academic and their own personal development and in their ability to understand their experiences to shape their choices.