A journal is an instrumental tool for helping students develop their ability to critically examine their surroundings from multiple perspectives and to make informed judgments about what they see and hear. Many students find that writing or drawing in a journal helps them process ideas, formulate questions, and retain information. 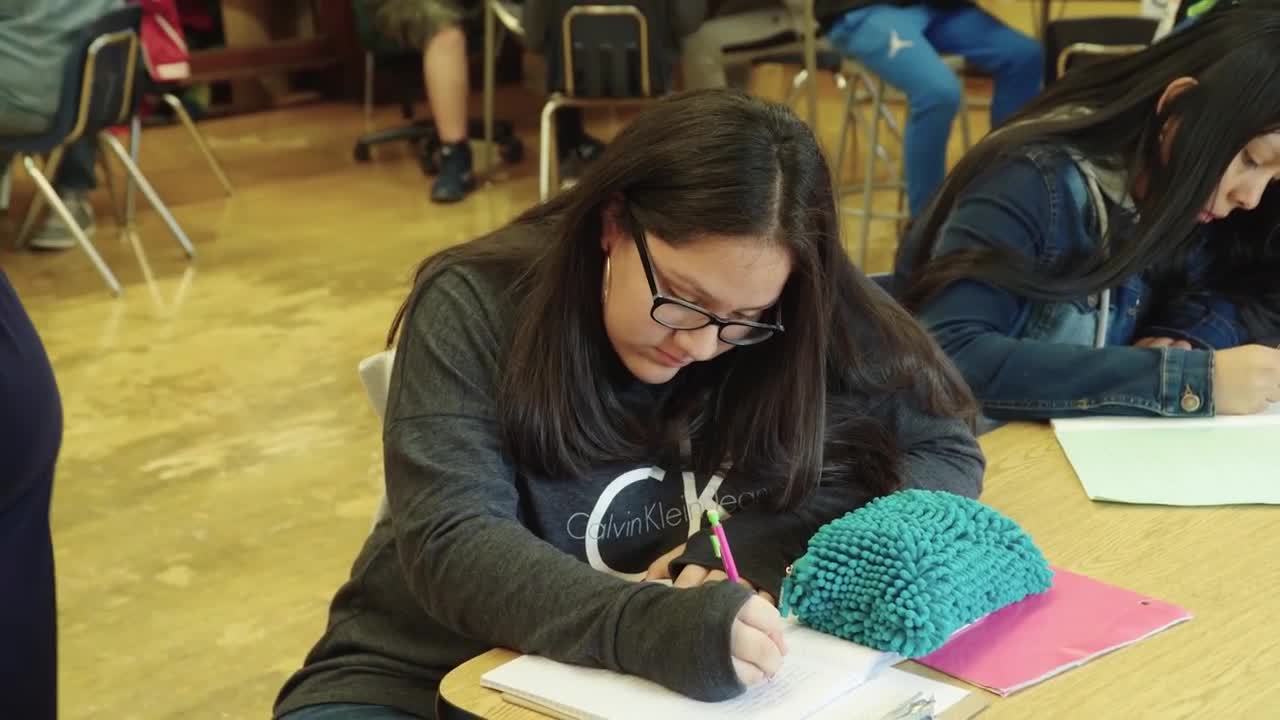 [JENNA FORTON] Journaling is everything in my classroom. We talk about, at Ravenswood, that writing is learning. And so these processes of learning are shown and practiced through writing, the act of writing. So journaling is an integral part of the classroom because it's an integral part of learning. So I have students use their notebooks as a space where they can engage. And so even if they are not feeling the confidence to share out vocally or they don't want to share out vocally or they're not ready, or they want to listen, they have an opportunity to engage within the classroom no matter where they are at because everybody can journal something. And so journaling can be used at any moment for engaging during class. And the strategy specifically of quick writing is that idea of not picking up your pen or pencil off the paper. And so using singular words, using a poem, using a drawing in order to express where you are at in your thinking even if that point is I don't know what I'm thinking, it's always a place for students to go. Jack, first question please. [JACK] What does equality mean to you? [JENNA FORTON] Second question. Carlos, go ahead. [CARLOS] Does it mean equal treatment under the law, equal opportunities, equal education, or something else? [JENNA FORTON] So based on what you know of equality, what does it mean? Go. You're going to have about 10 minutes to work on this, and then I'll check in. Now one more layer to your thinking. Eyes up here. So going back to the document for the dispute, how did you decide on the case? Did equality play a role in your decision? Even go back into the 14th Amendment itself. Look for the verbiage, look for the wording, try to identify a piece of evidence that you can connect to this idea of equality. Turn and talk. [SIDE CONVERSATIONS] [STUDENT 1] Not eagle-- legal-extralegal thing. [STUDENT 2] Yeah. [STUDENT 1] Yeah. And it's also important to distinguish equity and equality because equity is like advantages are given if you aren't-- if you're disadvantaged. But equality is the same treatment and none of that special treatment is given to even help other people. It's just the same. [STUDENT 3] Yeah. And, for example, even if equality is a thing, there's still going to be some people who are still going to struggling. Like, for example, that poster's a good example because it really does show if people are given equality, not-- people may be given the same treatment but not everyone is going to be feeding off that. [STUDENT 2] Some people need more help than others. [STUDENT 3] Yeah, and if we give equity, that means we get to help more people that are in need. [STUDENT 2] It's like the intersections of identity where people-- we see that woman are treated correctly sometimes and Black people-- Black men are treated equally sometimes, but what happens when you cross in the middle? [STUDENT 3] People decide to ignore it because there's no answer for that. [STUDENT 2] Yeah, we still don't have enough experience with that group to be able to help them. Therefore there's no equity. [STUDENT 1] No, it's not that there's no experience. I think it's more that there's just no way-- there hasn't been a way crafted to view them in their struggle. [JENNA FORTON] It is something that is so integral in our classroom that students almost just-- well, let's go. I appreciated that many of them, as I was giving things for them to consider in their journaling, I was happy to see that as I was walking around they were like asking themselves different questions. I was happy to see that when I would lean down and want to talk to a student about what they were writing about that they had something they wanted to verbally engage with me already. So I just think, again, that element of it was 100% participation in journaling, and I just am always surprised by that. You would just hear that it's such a difficult thing to get kids 100% engaged, and then you see through journaling that it's possible and kind of debunks that.