No Human Being Was Born Illegal

Students at a school in Los Angeles raise awareness about derogatory labels used to describe individuals who immigrated to the United States as well as those who identify as LGBTQ+.
Last Updated: April 13, 2022 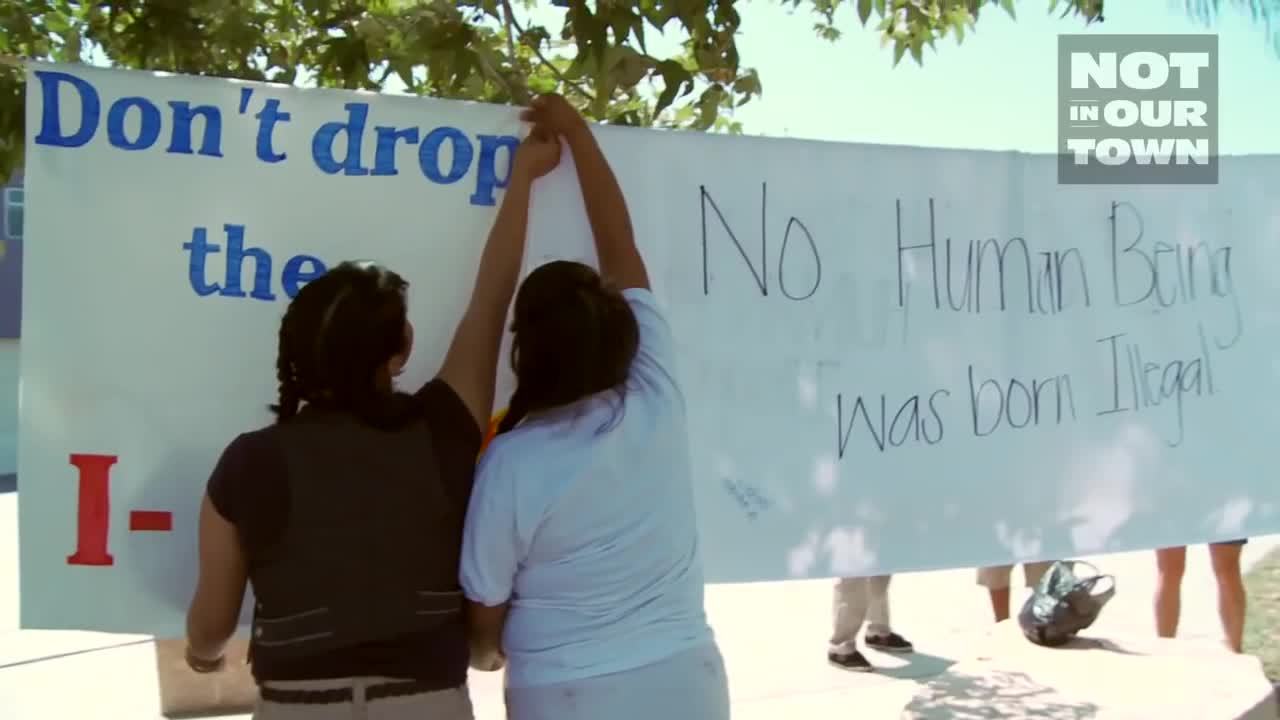 Hey, guys. Can we just practice what you're going to say when people walk over?

What does this mean, Don't drop the I-bomb?

Don't drop the I-bomb is our slogan. We're trying to stop the word of these illegal alien because no human being was born illegal.

And what are you hoping for, how many signatures?

We hope that whole blank spot is full.

Spring is just a really exciting time because it's sort of activism season here on campus. Our school is a Facing History school. We want to teach them how to be activists and upstanders and teach him about issues in the community and around the world and how to effect change.

The Social Action Project is a year-long project for every single senior. We've studied different kinds of activism throughout the years. So they decide what sort of activism they want to do. They come up with a project, and then it culminates with a formal presentation that the rest of the school gets to see.

We live in the heart of Los Angeles. It used to be called South Central. The majority of the students are immigrants. They are either children of immigrants or immigrants themselves.

Well, I ask you not to call someone illegal because no human being was born illegal. The crosses represent the people that have died on the borders. We should always remember that they risked their lives to come here.

The "Don't drop the I-bomb" group, they had heard in their own communities derogatory use of the word "illegal" or "illegal alien." And they decided to create a campaign to teach people that that's a hurtful term, and that there are alternatives.

Immigration to our group means a lot because we have family backgrounds where they have migrated here. And at certain point in our lives, we were all called illegal.

I'm writing my name because, like, well, me in my personal life, I'm an immigrant. And well, I really don't like it when people call me an immigrant because we don't come over here to do people wrong. We come over here for a better future for our kids and for ourselves. No human being was born illegal, yeah.

My best friend, she's undocumented. And, like, I love her, and I don't like it when people call her that. It doesn't make others feel good. I'm not going to use the I-word, and I will try to also teach people about how it affects everybody and how it's uncool to be doing that.

It was a like a wake-up call, like, for them to realize that labeling someone is not right. And I kind of-- yeah, I'm proud of being me doing that.

So the tape symbolizes the people who are being silenced every day because they are being oppressed.

The gay bullying group, they were really concerned with hearing casual use of the expression "that's so gay" on campus. So they learned about the no-hate campaign through the media, and they sort of modified that for our school. And they came up with the idea to paint and then record people, or take their photographs with the face paint, to have people sort of publicly proclaim their support for their cause.

This is called gay bullying. And it's about just preventing from other people from getting hurt, such as when people say "gay," "faggot," or stuff like that. And what we're trying to do is to stop all that hate that's going around, because all that hate can lead to death.

And hopefully you guys could see more about what is it all about in our pamphlet because this is an actual issue and people are suiciding themselves every day because people put them down.

At first, I was like, no, you know, like, I'm-- not my thing. I'm not gay, or you know, I don't like that stuff like that. But it's like, after you research it, it's like, you know, something really powerful that's going on. Me and my partners have gathered together, and we've talked about how we should spread out the word now outside our communities.

It's what we've seen again and again with our students is when they find something that really matters to them personally, they stop thinking of it as a school assignment, and it becomes their own sort of personal mission. I was so proud of the "Don't drop the I-bomb" group because they took on an issue that was of such significance to them personally. They gave it so much thought, and they were so emotionally involved. And I know that they will take that feeling that they had yesterday, and they'll carry it with them.

What about if I heard him say it to somebody else?

Well, then you would go like, you don't want to hurt nobody.

This Mini-Lesson uses images and firsthand accounts of Haitian migrants to humanize the events happening at the US–Mexico border and give shape and nuance to the news.
Mini-Lesson
Add to Collection

Teaching about the Ukrainian Refugee Crisis

Use this Teaching Idea to introduce students to the experiences of Ukrainian refugees fleeing war, highlight inspiring ways people have stepped up to help, and raise ethical questions about the treatment of refugees from non-European countries.
Lesson
Add to Collection

Students explore the supporting question “How did the Angel Island Immigration Station both reflect and enforce borders within American society?”
New
Activity
Add to Collection

Students explore the supporting question “How does the history of immigration through Angel Island help us understand how we create and challenge borders today?”
New
Activity
Add to Collection

Students explore the supporting question “How did border enforcement at the Angel Island Immigration Station impact immigrants and their descendants?”
New
Assessment
Add to Collection

Students culminate their arc of inquiry into the Angel Island Immigration Station by completing a C3-aligned Summative Performance Task and Taking Informed Action.
New
More Like This Teaching Resources Learning & Events
The resources I’m getting from my colleagues through Facing History have been just invaluable.
— Claudia Bautista, Santa Monica, Calif