Journalists discuss how social media was used in the aftermath of Michael Brown's death in Ferguson, Missouri.
Last Updated: April 13, 2022 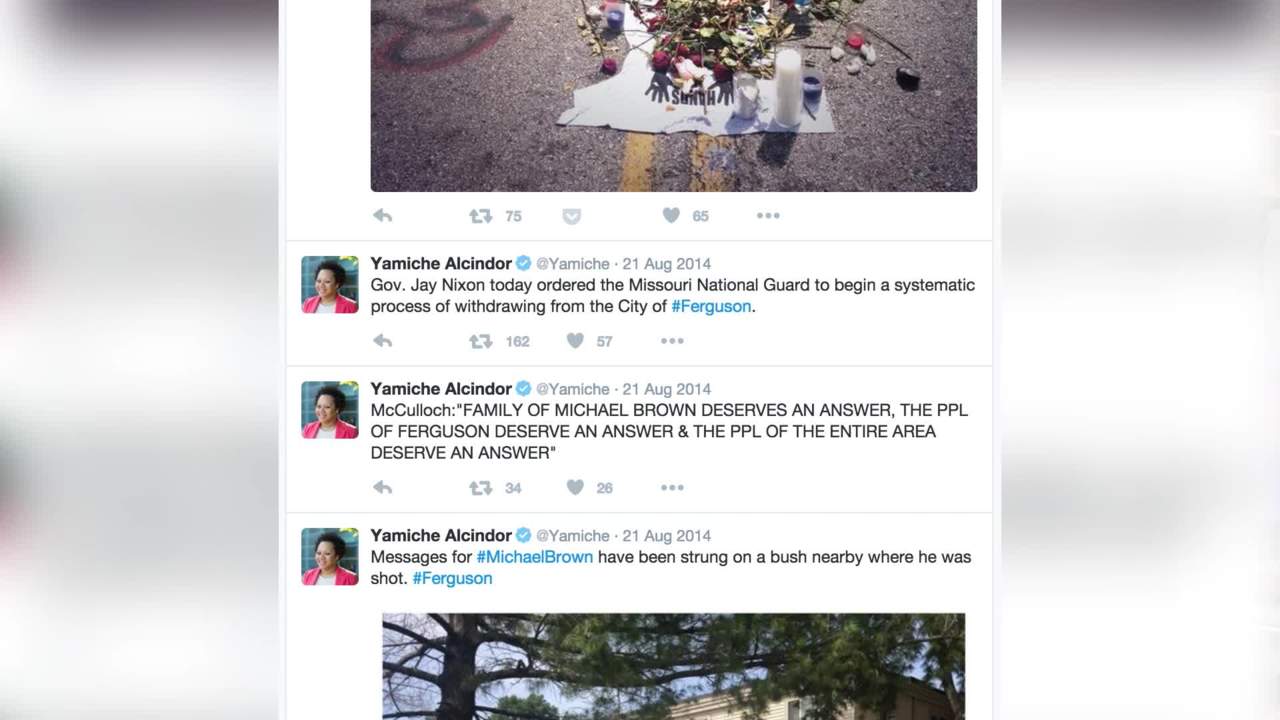 KENYA VAUGHN: Social media is what introduced me to Ferguson becausethe first information I got about Michael Brown was that Saturday, I was just scrolling through Instagram and there was a picture of a man who had a cardboard box that he had turned into a sign that said, The Ferguson Police Department just executed my unarmed son. And it was like-- I was like, Ferguson, Ferguson? Like, down the street Ferguson? Thats how I was made aware and this happened a mile from my house and I had no clue until I got on Instagram, so thats how I found out about it.

YAMICHE ALCINDOR: Social media was everything in Ferguson. So I was creating social media, I was getting news from social media. If I wasnt in Ferguson and went home for a day and half to grab clothes from Brooklyn, I was watching livestreams, I was looking at peoples Twitter feeds to know what was going on. Even when I was in Ferguson, I was always on Twitter looking to see whats going on, where are people protesting. I mean, I want to say 90% of the information, even from the police department, which wasto me was interesting was because the police were live tweeting in some ways.

KORAN ADDO: Social media, I mean its absolutely useful, its absolutely a tool, but you cant rely on it, you cant trust it 100%. It was very useful in finding out where people were and getting some sense of what was going on, but you cant take what people are posting on social media as a fact. You have to actually go out there and go through the normal reporting process, talk to multiple people, verify what theyre saying, does it hold up to scrutiny? Can I independently verify it? So yeah, absolutely social media was a great tool, but its just part, its just one tool. You still have to, you know, your classic reporter training still has to be the main focus of your job.

YAMICHE ALCINDOR: I think when it comes to individuals, I think, the same way with sourcing people, named or unnamed, you start relying on people and trusting people and building relationships so that if I see something on your Twitter feed, I know that youre someone whos always in Ferguson. I know youre not someone whos in another state who just tries to act like theyre in Ferguson but youre someone whove Ive seen on the ground, Ive interviewed before, Ive talked to.

I know that youre someone who, you know, even if I know youre biased, even if I know that youre either a protester or a police supporter or a Darren Wilson supporter, I at least know that youre a real person that Ive met. And I think the other thing is just asking other people what happened. So a great example was when the officers were shot in Ferguson, the first thing I did was go on and start figuring out who was tweeting about and started calling people and say, Were you there? What can you tell me? And some of the first people I talked to were my regular people that Ive talked to, protesters that Ive talked to for the last eight months. You can say I know this person, I know that what theyre telling me is true. So I think that thats really the way you verify information.

WESLEY LOWERY: I can send a tweet in real time and 15 different websites are going to be grabbing my tweets and writing headlines based off things I said. Not always grabbing the full context, not necessarily referring back to the story I write later that fills in some gaps, theyre going to say, Look at these three tweets. Clearly, Ferguson PD did this thing today! or, The protesters did this thing today. I think that everything becomes caricatured, everything becomes blown up larger than it is.

The standard that most news organizations Ive worked at and certainly at The Post is that Twitter is very often used1) as a source of live coverage in a way that very often, things that make your Twitter feed would not make your story. A lot of excerpts, the things that might have been left on the cutting room floor. Things that are happening in real time, details that matter because you are on the ground but dont necessarily matter page 1 story tomorrow. Its one of the reasons pictures are, in my mind, almost always preferable to be accompanied with covering something live because Im going to describe this thing and Im going to let you see it and Im going to provide you that context.

A lot of these news organizations, The Post not excluded from that, are still figuring out, especially in a highly volatile situation, how do you really do this, what does this really look like? Because youre asking people-- reporters who are under a lot of pressure and a lot of stress, in real time, in a quickly unpredictable situation, to provide live updates. So sometimes you provide a little human wiggle room around that. You know, I said that it was this street, but in reality it was kind of this other corner. I try, for one, to always go back and correctI dont like deleting tweetsbut I try to correct myself later. I say, Hey guys, remember earlier I said I was on Smith Street? Im really on Johnson. I try to say that and most people are pretty forgiving about that. But unlike an article on the site or on the paper, a small misspelling or grammatical error, youre not going to run a correction, youre not necessarily going to take a tweet down because I left a comma out somewhere.

Its a much more raw and real-time correspondence. Especially on a site like Twitter and social media, the emotional dispatches are the ones that go viral. Why does that compelling human interest piece that makes you cry, make you cry? Why is that the one you share with everyone? Because of the emotional human element to it.

This Teaching Idea is a guide for teachers to begin conversations with their students about George Floyd’s death and the events that surround it.
Mini-Lesson
Add to Collection

This Teaching Idea is designed to help guide an initial classroom reflection on the January 6, 2021, insurrection at the US Capitol.
Mini-Lesson
Add to Collection

This Teaching Idea guides students to use an iceberg diagram to synthesize the events of January 6, 2021, and outline the complex array of causes at work.
Collection
Add to Collection

Students define explicit, implicit, and confirmation bias, and examine why people sometimes maintain their beliefs in the face of contradictory information.
More Like This Teaching Resources Learning & Events
Using the strategies from Facing History is almost like an awakening.
— Claudia Bautista, Santa Monica, Calif