In this classroom video, a teacher leads a class through the contracting process and students discuss expectations and norms of how class members will treat each other.
Last Updated: July 29, 2018

Contracting is an effective strategy for making your classroom a reflective community. 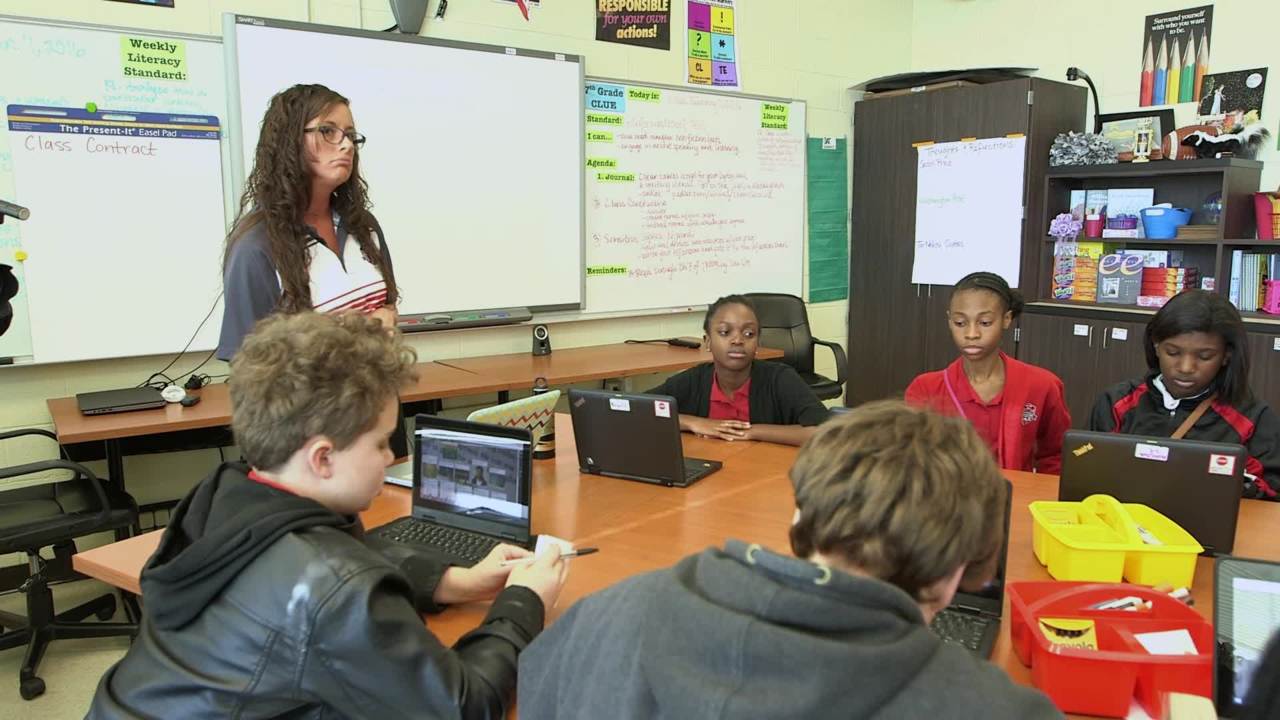 ALYSHA M. BIRD: Today is the actual first day of our To Kill A Mockingbird unit. So we are going to start with class contracting, which is one of the Facing History strategies that I absolutely love. The students are going to come up with their own contract to really buy-in to having a safe place for discussion. The students will come up with their own norms, and then decide which ones we need to have in our contract.

They have not contracted in my class before. I'm not sure if they have in another. I did kind of set this up last week. And I told them that we would be working together to build a safe environment for discussion. I didn't get too far into detail, but they do kind of know something like that's coming up.

So the goal kind of is to build a relationship amongst this group of people so that we can have some of those tough conversations. OK? So what we're going to call this, it's contracting. What's the contract? Nolan?

NOLAN: An official document, I guess you could say, binds a person or object to something.

SPENCER: A general agreement about some topic or subject.

MADDIE: A contract could be used like when you buy a car, or when you buy a house, you have to put a contract that you're going to take care of it. And you actually own it once you sign the contract.

ALYSHA M. BIRD: Once you do what?

ALYSHA M. BIRD: Once you sign a contract. I heard you. I just wanted you to repeat that. You all are actually going to sign our contract, right? We are going to, again, take a look at some difficult things in To Kill a mockingbird. So our contract that you all are going to buy into is so that we can be safe with each other.

Now, with your partner or group, you're going to decide on two or three discussion norms that you need to feel comfortable. What you're going to do, inside your caddy you've got all sorts of different supplies. I would like for you all to write each norm on a separate Post-it note.

What do I mean by norms? What's another word for norm? Spencer?

ALYSHA M. BIRD: Basic rule. All right. Do I mean things like don't talk while others are talking?

ALYSHA M. BIRD: No, that's a class rule, right? So can someone just start us out with an example of a norm you would need in order to feel safe for discussion? Hayden?

ALYSHA M. BIRD: Be kind. Exactly. Those are the kind of things we're going for. What do you need from the other people in this room to feel safe to have hard discussions. I'm going to give you all about four minutes to talk about this and to write your norms down and stick them to your table.

MADDIE: Talk instead of like three people, because it's kind of like, really? Do I have to answer all the questions? You know?

MADDIE: It's better if everyone is trying to be engaged and talk about the subjects, whether there's scared or not.

MADDIE: Try to just be a little more open.

ALYSHA M. BIRD: All right. So how could you say that? What you're saying is basically sometimes what happens in a discussion is it gets dominated by a few people. And that's what we're trying to stop, right?

ALYSHA M. BIRD: Good. Everyone engaged. How could you nicely say to those handful of people that others need to talk as well?

SPENCER: Give some other people a chance.

ALYSHA M. BIRD: Share the floor. So we're going to talk about these questions. When have you felt comfortable sharing your ideas and questions in a class? And what was it that happened that made you feel comfortable? Anyone want to consider that? Yes, Erica?

ERICA: When I know a lot about the topic.

ALYSHA M. BIRD: Good. OK. So when you were familiar with the topic. All right? So you're going to be unfamiliar with some of the things in To Kill a Mockingbird. So it's important for us to be comfortable enough to feel like we can discuss that. OK? Kelsey, did you raise your hand?

JADA: I felt comfortable when I wasn't the only one that had a question.

ALYSHA M. BIRD: When you were asking a question, and you were not the only one, so when others had questions as well. Did your teachers ever tell you make sure you ask your question because other people might have the same question?

ALYSHA M. BIRD: Absolutely. So that's something that I'll definitely try to remind you all of as well. Jada?

ALYSHA M. BIRD: OK, when everyone's into it, when everyone's engaged. Wonderful. OK. What about when have you had ideas or questions and not shared them? And then why didn't you share them? Nolan?

NOLAN: Just like now and then I'll have this one question that seems silly because nobody else is asking a question in the same area. And it's not DI where no question or idea is bad.