Born in Novi Sad near Belgrade, Yugoslavia, Ava Schieber’s parent’s were Jewish. Her father changed his name to receive a commission in the Austro-Hungarian army during the First World War. The family moved to Belgrade in 1940 where they prospered until the Nazi’s arrived. The family made a decision to go against Nazi decrees and not register as Jews. Instead, they chose to separate and go into hiding. Ava's mother had converted from Catholicism and still retained her baptismal certificate enabling her to live more openly. Her father went to Hungary and her sister stayed with her non-Jewish Serbian fiancé.

In 1941, then fifteen-year -old Ava was sent into hiding on a Serbian farm 12 miles outside of Belgrade owned by relatives of her sister's fiancé. She was forced to make an abrupt transition from an urban, school-focused life to the arduous life of a rural farm hand. For four years she pretended to be deaf and mute. Her family background and understanding of the dangerous situation she was in, combined with her courage to master physical challenges, enabled her to use every available resource for both physical and emotional survival. Ava continued to create art despite her dire circumstances. In fact, one of her watercolors from that time hangs in the U.S. Holocaust Museum. She also continued her studies by reading a set of large German encyclopedias she carried into hiding.

After the war Ava discovered her father and sister had been killed. Kadishson Schieber reunited with her mother and lived with her in Yugoslavia for four years. During that time, Ava won a scholarship to attend Zvezda Film Institute in Belgrade to learn to be a theater set designer. Living under the communist regime proved untenable. She and her mother emigrated to Israel in 1949. She married Yitzek Kadishson and worked with him at the Cameri Theatre, an improv theatre in Tel Aviv of which he was one of the original founders. She also began to paint and collect artifacts. Ava and Yitzek had three children-Rafi Kadishson, Benjamin Kadishson and Shira Kadishson Yannay. She also has 10 grandchildren. After Yitzek's death in the early 80s, Ava began to exhibit her art in the United States. In 1985 Ava married Chicagoan Nathan Schieber and settled in the city where she continues to live today.

Besides telling stories about her life, Kadishson Schieber instills in students that education and information are the greatest weapons against intolerance. Ava is an artist, a poet, a philosopher and a wonderful spirit.

Hear Ava Kadishson Schieber speak about her life and in the following videos. 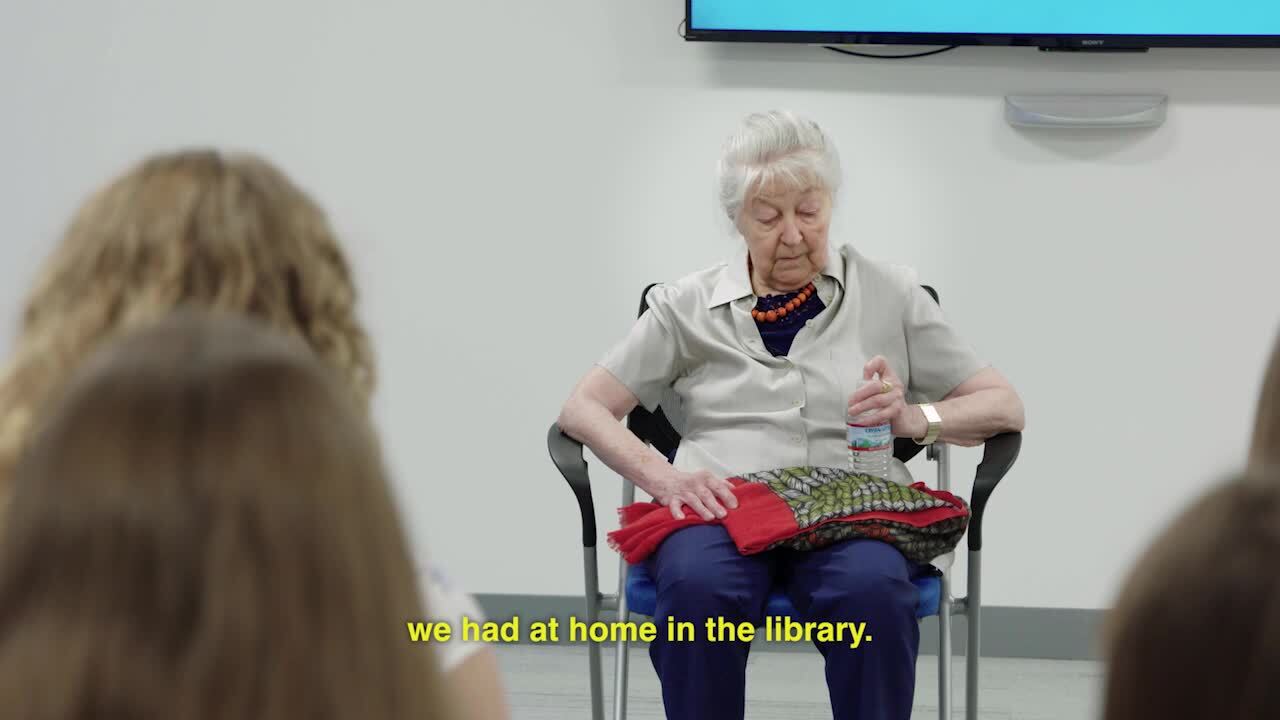 Holocaust survivor, artist, poet, Ava Kadishson Schieber speaks to students about how she survived the war by leaving her family and hiding on a farm. She answers students’ questions about her survival, her faith, and her education.

Ava (age 11) on summer vacation in Slovakia in Lake Blede

Ava Kadishson Schieber and Her Mother

Ava Kadishson Schieber and Her Family

Ava Kadishson Schieber, Her Mother and Her Sister Suzanne

Photograph of Suzanne, the sister of Holocaust survivor Ava Kadishson Schieber, at age 15 or 16.

Ava was both an accomplished artist and a collector of art and artifacts.

Piece of Yemenite jewelry from the collection of Ava Kadishson Schieber.