Washington Post reporter Wesley Lowery describes how he was arrested in Ferguson, Missouri, and explains how freedom of the press was threatened during the protests.
Last Updated: April 19, 2022 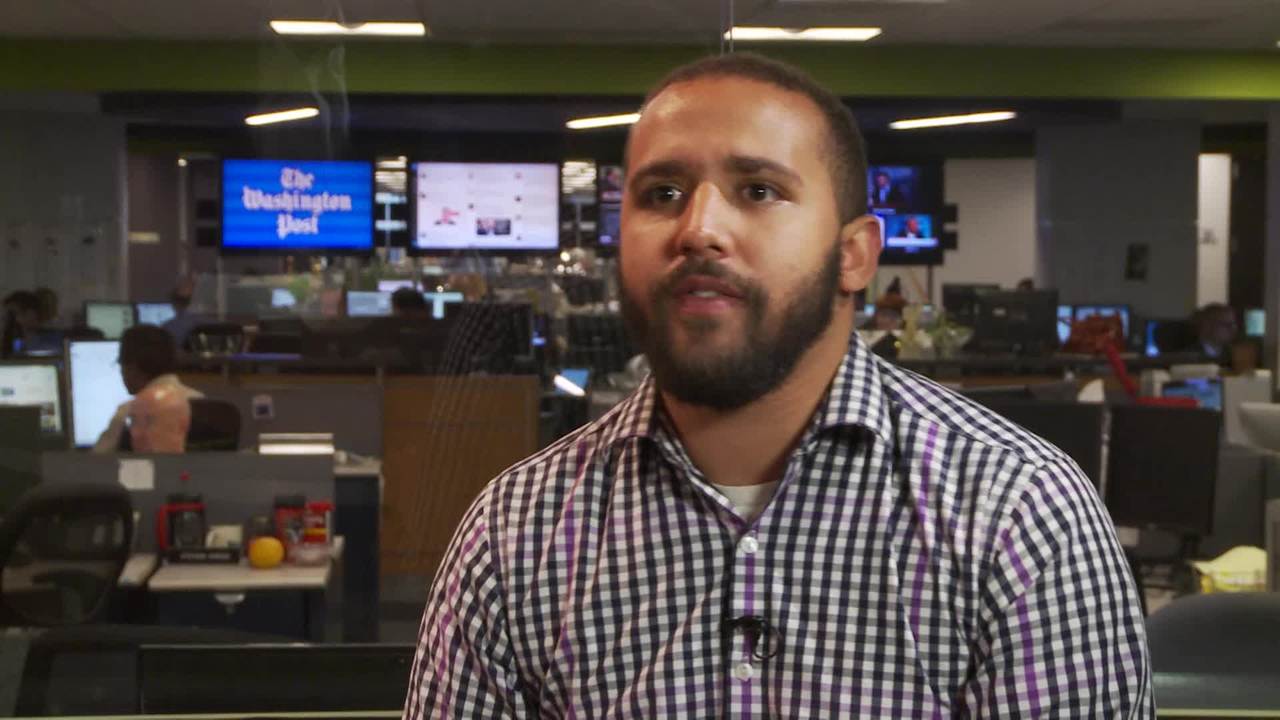 WESLEY LOWERY: On that Wednesday, I walked up to the McDonalds after covering this daytime protest. It was still going on, but I could break off for a few. I had to file something for another piece we were working on. I wanted to write up some of my notes. So I set up shop in this McDonalds and you know, really set up shop. All my notebooks are out on the table, my computers set up, Ive got two bags with me.

Myself and Ryan Reillythe reporter from the Huffington Post, who was also in the McDonalds, also workingwe were across the dining room from each other and we started to see people from the protests coming in, stopping by to get food. Wed make small talk with them, ask them, Hey, hows it going? Whats going on out there? Is it still crazy? And they're like, No, nothings really happening. Theyre setting up a little road block up the street, for some reason, but we really dont know why. But, it didnt seem like much was going on.

And as we keep working and stuff keeps going on, eventually a team in full SWAT gear comes into the McDonalds and that was really striking. We were like, Wait a second, whats going on?

Being the obnoxious social media reporters we both are, we both got up and took pictures of these police officers who are now in our McDonalds in all this gear.

This is just really strange, its out of place, this is not where any of the protest is happening. And we watched them have this interaction with the manager, Keith, at the front of the McDonalds. Theyre having this back and forth with him. Theyre trying to explain to him, Listen, we want to try to close all the businesses on West Florissant, or something along these lines, because it might get violent out there, we dont know whats going to happen, we dont want any risk. And Keiths going back and forth asking, Do you want us to clear all the dining room for you. And initially the answer was, No, were fine. Its 6 p.m. in a McDonalds. This is actually a very important time for business.

And so the officers then came into the dining room and they gave us all a warning. They said, Listen, you guys should all leave. Again, being reporters, we asked, So just to be clear, are you telling us weve got to go, or are you just advising us that theres a situation? And they said, Well, what were saying to you is if you call 911, were not going to come respond here.

Theyre letting us know that, Youve been warned, things could get crazy and if thats the case, were not coming back. We tried to warn you. And again, that was fine with me. If a riot broke out in the McDonalds where I was, I, in fact, would be perfectly positioned to cover the riot that I would need to be covering. They werent quite sure what to do with that responsethat these two people were OK with the fact that things might happen here, that the idea that violence could happen didnt deter us from wanting to continue doing our work. So they came back moments later having made the decision that this is no longer Keiths decision, this is no longer up to McDonalds, theyre clearing the McDonalds, you gotta get out of here. Alright, cool. So they say, Never mind what we said, you gotta go, you gotta get out of here, stop videotaping us. You gotta get out of here.

At that time, one officer came over to me; another officer went over to where Ryan was. They were having what seemed to be kind of a heated back and forth. The guy was asking Ryan for his ID. He was saying, I dont have to give you my ID.

Meanwhile, Ive got my credentials around my neck and Im having this back and forth with the officer because hes insisting, Stop videotaping me and pack up your stuff. I was taping him with one hand and trying to pack up all these things I had taken out with the other. And hes just saying, Get out of here. Youve gotta leave, youve gotta leave. And I said, You can see Im working on leaving. Repeating yourself is not going to make it happen any faster.

At one point he gestures at me with his weapon, which I particularly didnt appreciate and I said, Hey, dont point your gun at me.

Alright, sir. Im trying to leave. What do you want me to do? Can I go get my car or should I walk up the street?

Well, of course you can get your car.

They confer and say, Go out this door.

So, I turn to leave, and my backpack, which is still only over one shoulder, starts to slip off and I say, Give me one second, I gotta adjust my bag.

And they said, Lets take him. Forget this. At which point they grab me and they push me up against the fountain soda machine in this McDonalds and so Coke is now like spraying off my arm. I put my arms behind my back and I drop my notebook out of my hand. And essentially say, My hands are behind my back, you can arrest me. Its fine.

And I'm saying, Im not resisting.

So, they put me in plastic ties and they walk me out of the McDonalds and out of the corner of my eye I see Ryan still having this heated back and forth with this other officer. He hasnt been taken into custody yet, although it seems clear that there might be something going on there. I try to yell out to him to tweet that I got arrested, essentially. I dont have my phone and Im in cuffs.

Im taken outside and stood out in the street and moments later Ryans brought out and hes clearly, physically upset. He says his head was slammed into the door by this officer who had taken him into custody. Hes in these plastic ties as well.

They bring us outside, were standing directly in front of this McDonalds and were having a very heated exchange with these police officers now, in which were repeatedly saying, So, are we under arrest? And if so, what are we being charged with?

And they say, You know why youre under arrest, X, Y, and Z."

Were having this back and forth, which was very tense, and they say, We have to call a car to get these guys out of here.

We had some more tense back and forths. They eventually conclude that we are probably right, we are not going to fit into the back of this thing with this guy. They call another transport vehicle for us. At which point we keep having a back and forth with these officers. We say, This was really a mistake. Were members of the press. We had every right to be where we were. We were customers of a private establishment, complying with your order to leave. The last I checked, the St. Louis County PD doesnt have jurisdiction over the McDonalds that sits over on West Florissant. But we were complying and still are stuck in this." And I said at one point, Youve made a mistake here. This is going to be on the front page of The Washington Post tomorrow and I hope you know that. And they said, Well, youre going to be in our jail cell tonight, so we hope you know that. So that was kind of the tenor of our back and forth.

We were in there what was probably half an hour, maybe 40 minutes in the cell and at some point the guy overseeing it comes out and he says, Who are the journalists? Are there reporters down here?

And he goes, Alright, youre free to go. And opens the door and gives us our stuff.

And were both like, Ok, do we have a report number? Do we have a police report? Who are those guys?

Were still very upset about this. Were going back and forth and finally the officer just said, You either get out of here or were arresting you again. You gotta leave.

So we walked out and stood in the parking lot while we called our editors, and received all these notifications from social media. People had known, some people in fact had seen the arrest. That kicked off one of the biggest days on social media. I got my phone back and I had all these voicemails, all these text messages, all these emails.

And the easiest way, I thought, to update all of the people was to send a few tweets about where I was and what was going on. And also, this idea that how can I as quickly as possible document what just happened?

That was the first account that had gotten out about this arrest. For much of the day, people were wondering what happened, who had been arrested, was it these journalists, where are they?

And that series of tweets was the first confirmation of these things. So they blew up in a way that we hadnt seen in Ferguson.

In many ways, the arrest of journalists, and eventually more than two or three dozen journalists would be arrested for things as little as standing on the wrong sidewalk, stepping into the street during a protest, being confused about the instructions they were being given.

What most reasonable people have now concludedno matter where they fall on the political spectrum, no matter how they feel about me or Ryan Reilly personally, no matter how they feel about Michael Brown and Darren Wilson personallymost reasonable people can now conclude, as the Department of Justice now has: the Ferguson PD often acted with an impunity that was unacceptable based on the way our constitution works. Arresting people for saying things they dont like, not quickly enough following orders, and it raised a lot of those questions that people in Ferguson were talking to us about from the first day. They were telling us these anecdotes. They were saying, Our cops are terrible. They do X, Y and Z. And I was saying, OK, Ill write that down, but Im never going to report that. I could never confirm that. Theres no way.

It gave a validation to so many of the stories of the people of Ferguson in a way it never had been before. If they were willing to treat these two pretty boy reporters from D.C. this way, how are they actually treating the black residents of their city?