Tragedy Into Hope: Students Rally to Create a Memorial for Ell Persons

Memphis Students present on the lynching of Ell Persons and their goal to create a memorial garden in his honor so their community can reflect on the past
Last Updated: April 19, 2022 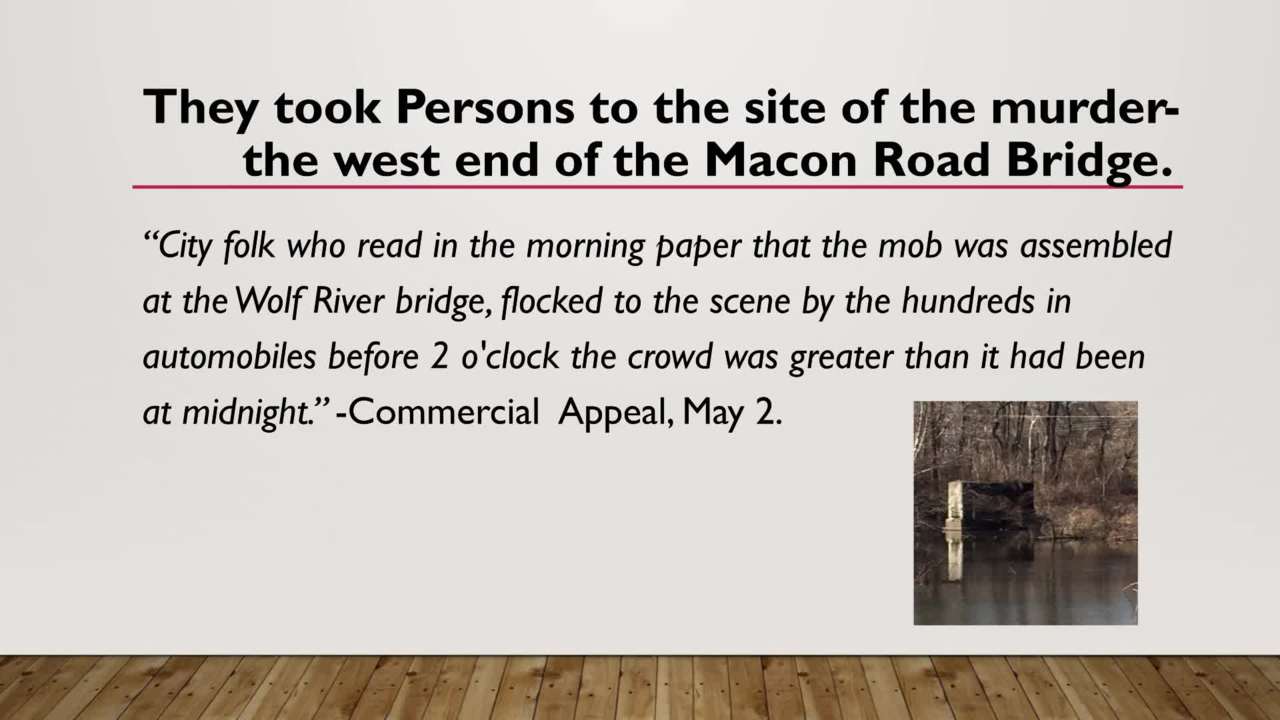 Good morning, and welcome to Overton. My name is Zoey Parker.

And my name is Khari Bowman.

And we're here to present to you our presentation on the lynching of Ell Persons.

So basically, lynching is the unlawful practice of killing, hanging, burning a group of people or person. And it's usually done by a mob. And the founder of this word was Charles Lynch, and his family also founded Lynchburg, Virginia. And Charles Lynch was a judge in the 1700s.

So, with our presentation on Ell Persons's lynching, a little background on him is that he was an African American man who was a woodchopper. And he lived on Macon Road, which is a street that's now Summer in Memphis, and it's about three, maybe four, miles from Overton High School.

He allegedly raped and murdered a 16-year-old girl by the name of Antoinette Rappel.

So now we're going to try something. I want everyone to close their eyes now, and imagine my friend, Alex Smith. Can you describe my friend Alex Smith?

Now, everyone open their eyes. If you are able to describe or even see a person named Alex Smith, then you've understood my point. The point of the exercise was to show how unlikely it was for someone to know so much about Ell Persons and his life, but never met him or spoke to him, or even seen him.

But unfortunately, this happened to Ell Persons. A man by the name of Mr. Hansen went to the sheriff and described Ell Persons and his wife, even though he claimed she was in the house that he described to him as well. But he said that he's never met them or seen them before.

So before his trial began, he was moved to Nashville for his safety, and police travelled with Persons to try to protect him. And the Shelby Avengers were a mob, and they followed the trains that he was transported on, and they hopped on looking for him.

The Shelby Avengers were not your average mob. They were extremely organized, and would terrorize anyone that they considered to cross the color line. And, like Khari said, they hopped from train to train looking for him. They called everyone that they knew, asking them if they've seen this train, if they've seen this person. And they just wanted to find him so they could terrorize him.

Finally, after searching numerous trains, they finally found the right one. And it was found in Holly Springs, Mississippi, which is about 45 minutes from here.

So the Shelby Avengers took Ell Persons to the site of his murder, which is the west end of the Macon Bridge. And people begin gathering at midnight. Newspapers published the event, informing people of where it would be.

Now we're going try another exercise. I want everyone to close their eyes again and imagine you're at a carnival.

Imagine being surrounded by 5,000 white people-- men, women, children in their best-dressed outfits. The scent of peanuts and popcorn fills the air.

"Step right up and get your candy and popcorn. Only a quarter apiece. Step right up. Hot and fresh."

Now imagine the main act of this carnival is an African American man getting lynched. Now open your eyes. Do you still feel the warm atmosphere that you once felt before?

Children were excused from school. Parents sent notes requesting that their children be checked out of school. And initially, children weren't allowed to be dismissed. But since so many people wanted to go, schools ended up just letting a lot of students get checked out.

Ell Persons was finally brought to the scene, and people screamed for vengeance. Women, who are known to be the nurturing and caring souls of the world, were the main ones that were screaming at the top of their lungs, "Burn him, and burn him slow."

And they did. They chained him to a log, poured gasoline all over his body, and burned him alive.

After being tormented to death, Ell Persons's body was cut up and spread across Memphis. They even threw the head of Persons at a group of doctors, African American doctors at that, in downtown Memphis.

The only, supposedly, evidence against Persons was that someone claimed that they could see his face in the pupils of Rappel's eyes.

So the outcomes from this is that the lynching of Ell Persons did help to establish the Memphis chapter of the NAACP. However, the event goes unnoticed, and we want to bring more attention to not only this lynching event, but others as well.

Our goal is to raise money to build a memorial for Ell Persons, and to create a space where people can come to reflect on the lynching, as well as reflect on how they can make our city better. Not just our city, but our world.

So our first step will be to create a plaque in the honor of Ell Persons to show the story of what happened to him. Not only to people that come that live in Memphis, but people that may visit from different areas and regions of the world.

And our second step would be to create a meditation garden, similar to this one, in honor of Ell Persons.

And our last step would be to build a bridge that runs parallel to the remaining Wolf River abutments. And this is a picture of one of the abutments that we saw down there. And this will add to the meditative atmosphere of the location and provide more access for it.

And as we worked more and more on this project, we realized we wanted to work more on other projects that connected students to issues in their society. And as a result, we created our nonprofit organization called SUM, which stands for Students Uniting Memphis.

So next year will be the 100th-year anniversary of the Ell Persons lynching. And we are really aiming for our meditation garden and our plaque to be up by then, because we want people to know about this by this time next year.

Responding to the Rohingya Crisis

Students place this ongoing crisis in historical context, view footage from a refugee camp, and reflect on survivor testimony.
Mini-Lesson
Add to Collection

Use these activities and resources on Japanese American incarceration during World War II to introduce students to this history while exploring questions about American identity, racism, and citizenship.
Lesson
Add to Collection

Students learn about the responses to Johnson’s policies by Republicans in Congress and examine the fourteenth amendment that overturned Presidential Reconstruction.
More Like This Teaching Resources Learning & Events
Using the strategies from Facing History is almost like an awakening.
— Claudia Bautista, Santa Monica, Calif