After the Federal Judge ordered integration in Little Rock, Arkansas, the "Little Rock Nine" prepared for their first day at Central High School. Governor Orval Faubus, in defiance of the order, called out the Arkansas National Guard. One of the students, Elizabeth Eckford, could not be reached and was therefore not informed of the plan. This is her story.
Last Updated: April 21, 2022 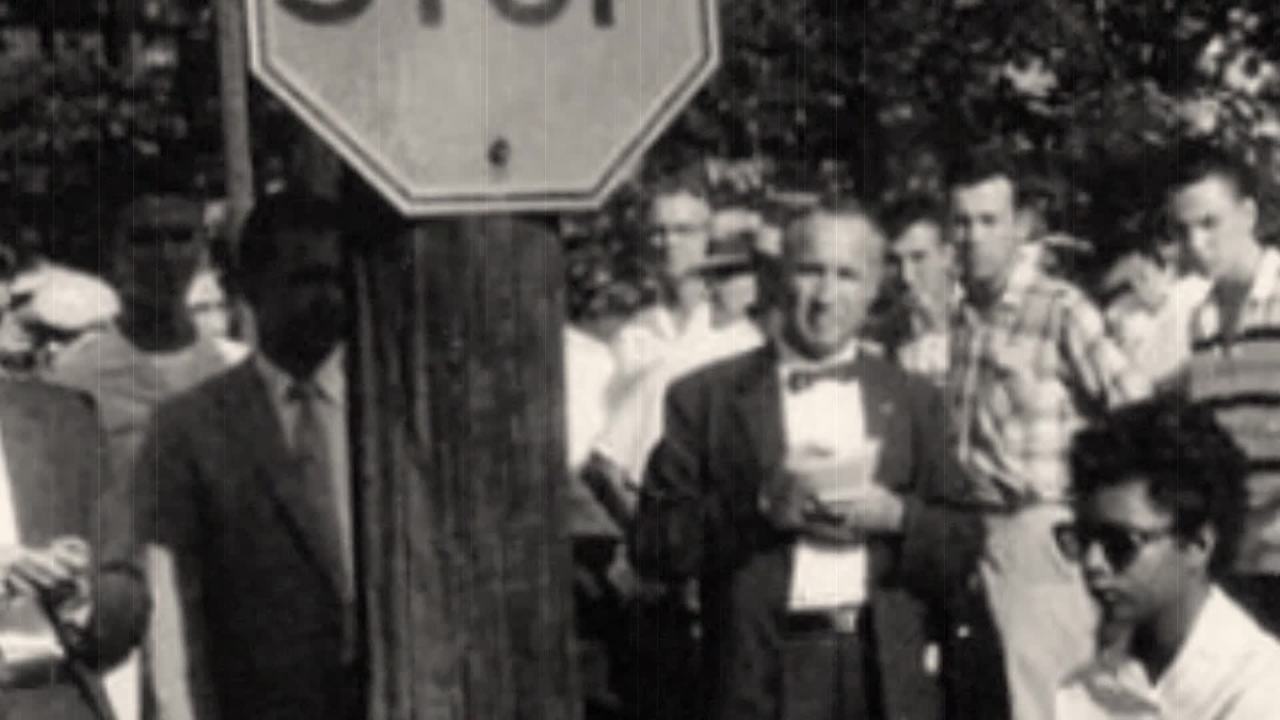 After the Federal Judge ordered integration in Little Rock, Arkansas, the "Little Rock Nine" prepared for their first day at Central High School. Governor Orval Faubus, in defiance of the order, called out the Arkansas National Guard. The night before school opened, he announced: "Units of the National Guard have been and are now being mobilized with the mission to maintain or restore the peace and good order of this community. Advance units are already on duty on the grounds of Central High School." The NAACP arranged for the African American students to be escorted to school on the day after Governor Faubus's speech. One of the students, Elizabeth Eckford, could not be reached and was therefore not informed of the plan. This is her story.

I expected that there may be something more available to me at Central that was not available at Dunbar, that there might be more courses I could pursue, that there were more options available. I was not prepared for what actually happened.

I was more concerned about what I would wear, whether we could finish my dress in time. What I was wearing, was that OK? Would I look good?

The night before, the governor went on television and announced that he had called out the Arkansas National Guard. I thought that he had done this to ensure the protection of all the students.

We did not have a telephone. So inadvertently, we were not contacted to let us know that Daisy Bates of NAACP had arranged for some ministers to accompany the students in a group and so it was I that arrived alone.

On the morning of September 4, my mother was doing what she usually did. My mother was making sure everybody's hair looked right and everybody had their lunch money and other things, their notebooks and things. But she did finally get quiet, and we had family prayer.

I expected that I would go to school as before on a city bus. So I walked a few blocks to the bus stop, got on the bus, and rode to within two blocks of the school. Got off the bus, and I noticed along the street that there were many more cars than usual, and I remember hearing the murmur of a crowd.

But when I got to the corner where the school was, I was reassured, seeing these soldiers circling the school grounds. And I saw students going to school. I saw the guards break ranks as a student approached the sidewalk so that they could pass through to get to school. And I approached the guard at the corner as I had seen some other students do, and they closed ranks.

So I thought, well, maybe I am not supposed to enter at this point. So I walked further down the line of guards to where there was another sidewalk, and I attempted to pass through there. But when I stepped up, they crossed rifles.

And again, I said to myself, well, maybe I'm supposed to go down to where the main entrance is. So I walked toward the center of the street. And when I got to about the middle and I approached the guard, he directed me across the street into the crowd.

It was only then that I realized that they were barring me, that I wouldn't go to school. As I stepped out into the street, the people who had been across the street started surging forward behind me, and so I headed in the opposite direction to where there was another bus stop. Safety, to me, meant getting to that bus stop.

I feel like I sat there for a long time before the bus came. In the meantime, people were screaming behind me, what I would have described as a crowd before, to my ears sounded like a mob.

Students learn about the aftermath of the Civil War and examine primary source documents that provide insight into the difficult task of reuniting the nation.
Lesson
Add to Collection

Students examine President Andrew Johnson's plan for Reconstruction and the debate it provoked with Congress while reflecting on deeper issues of healing and justice.
More Like This Teaching Resources Learning & Events
Using the strategies from Facing History is almost like an awakening.
— Claudia Bautista, Santa Monica, Calif