The Lavender Scare: Gay and Lesbian Life in Post-WWII America

Learn about the attempts to purge the US military and federal government of gay and lesbian employees during the Cold War and decades later.
Last Updated: April 18, 2022 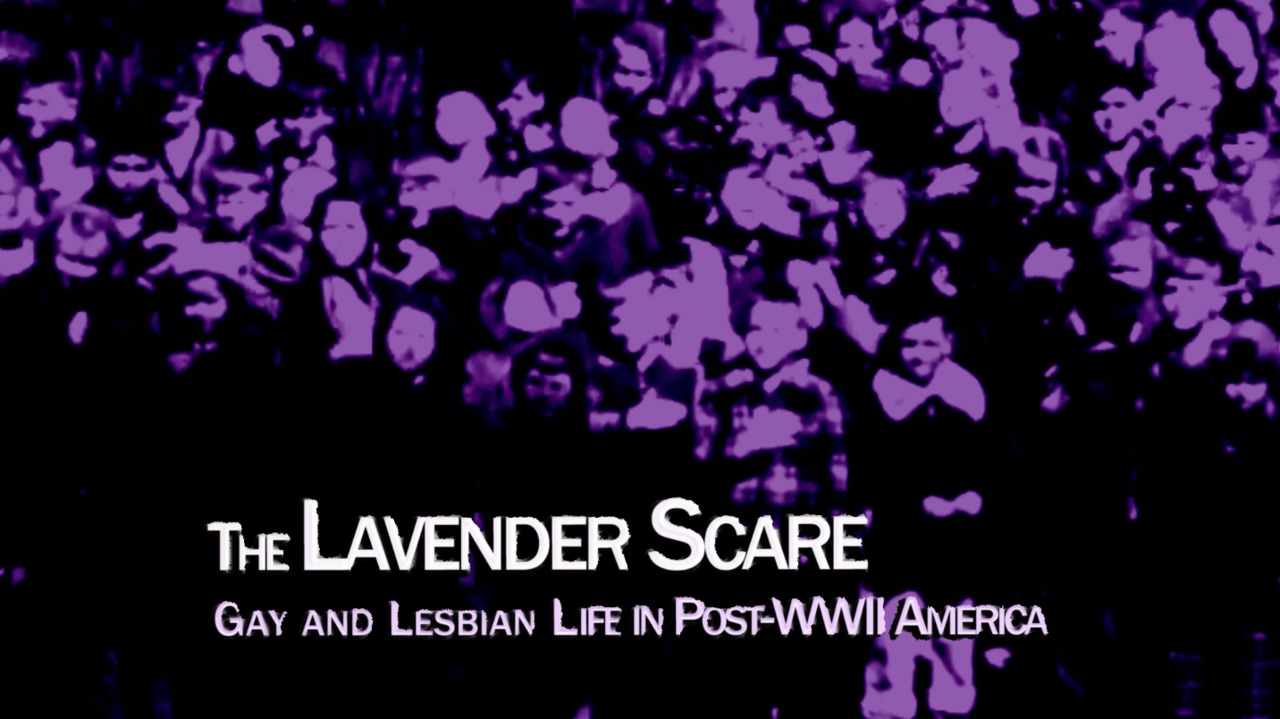 The Lavender Scare, which we can locate historically in the period from the World War II era into the first decades of the Cold War, is a decades-long attempt by politicians and political officials to purge the federal government-- in the military and in other kinds of federal employment-- of homosexuals, of gay and lesbian people.

People have engaged in same-sex relations and gender nonconformity throughout American history. But society's attitudes toward these behaviors and the people who identify by them have changed over time.

The term homosexuality entered the English language in the late 19th century. And within decades, there were many gay men and lesbians living openly in New York City.

(SINGING) My grandmother buys those tailor-made clothes. Grandfather tries to smell like a rose. Those masculine women and feminine men.

This new visibility combined with the nationalistic fervor of World War II would dramatically alter how gay men and lesbians were perceived in American society and how they were treated.

Popularity-- what is it made of? How does a person get to be popular with lots of people and have a few close friends too? Let's watch and see what makes people like one person and not another.

All of these things are sort of norms that are constructed. They're socially constructed against some kind of an other. And then the fear arises out of that. So what you get in the period after World War II is just another manifestation of that, and one that becomes targeted towards people who are suspected to be or known to be homosexuals.

Shortly after the United States entered World War II in 1941, the military began to discriminate against gay men by issuing blue discharges. Dismissals printed on blue paper signified that the recipient was suspected of homosexual behavior.

The period following the war would prove even more burdensome for both gay men and lesbians, though, as fear of the Soviet Union's military might and its potential to spread communism swept the American social consciousness.

Here in Russia, you see the reason why we are spending billions of dollars in defense production, why your family is paying the highest taxes in our history. The leaders of Russia tell us their only concern is the defense of their own nation. Is this so? Or are they ambitious for world conquest?

And with the most deadly of all weapons available to the Russians, no peoples in the world can feel secure against this aggression.

As the Soviet Union was increasingly seen as a threat, ideological and behavioral conformity became paramount to what many considered an American way of life. As a result, those who did not meet the norms of the time were seen as dangerous and subversive.

It's a bomb. Duck and cover!

In this political moment, Joseph McCarthy, a senator from Wisconsin, rose to prominence by leading investigations to remove those he accused of communism and Soviet espionage from government positions, the military, and even the entertainment industry.

We have got to dig and root out the communists, and the crooks, and those who are bad for America.

Though he often lacked sufficient evidence to prove any wrongdoing, he had internal support from FBI director J. Edgar Hoover. And he also gained a vast public following.

McCarthy and others initially claimed homosexuals, the males of which many people referred to at the time as lavender lads, were a security threat because they could be blackmailed to provide state secrets to the Soviets, though no evidence suggests this ever happened.

As investigations continued, both gay men and lesbians were increasingly targeted simply for being what McCarthy called threats to the American way of life.

And so this anticommunism that was a characteristic of the Cold War, fueled by the fear of war with the Soviet Union, was yoked together with this anti-homosexuality.

And it becomes codified, in a legal or public policy sense, when Dwight Eisenhower signs an executive order, 10450, in 1953. This was the mandate that the federal government would preside over the purging of homosexuals in the military and in federal employment.

By 1954, the US government was dismissing as many as 60 people from civilian government positions per month for suspected homosexual activity, often without providing any evidence beyond rumor or hearsay. And although the McCarthy trials would end in 1956, the Lavender Scare continued to have consequences on gay life that would last for decades.

First, it contributed to a more hostile environment for homosexuals in the broader American culture, in which an incorrect and harmful association between homosexuality and sexually predatory behavior, perversion, and mental illness became increasingly common.

The discrimination gay men and lesbians faced increased the number who tried to live in the closet or hide their sexual orientation. But it also had another major impact. It brought them together as a community, and in turn, helped birth a protest movement for equality.

Over the decades during which the Lavender Scare is occurring, you have the emergence of the first gay organization with the Mattachine Society in 1950, the first lesbian organization with the Daughters of Bilitis in 1955, and another gay and lesbian group, the Janus Society in 1960, that were really meant to be places where gay and lesbian people could gather, where they could recreate that world and culture that we saw in places like New York in the prewar period.

These were the folks who organized the first public protests of the Pentagon, of military recruitment facilities, of federal agencies, all of whom were discriminating against gay and lesbian folks.

These early activists laid the groundwork for a much larger and more confrontational gay liberation movement in the late 1960s. But despite their efforts, the legal and social ramifications of the Lavender Scare and Executive Order 10450 were far-reaching. The legislation stayed in place until 1995 and resulted in the dismissal of more than 5,000 federal employees in its 40-year span.

Perhaps even more damaging, though, was the long-lasting stigma that came with tying homosexuality with anti-Americanism and subversion.

American history is filled with these examples of people whose identities are somehow other, outside the norm, being vilified, being marginalized, being excluded because they're somehow imagined as being ideologically beyond the pale. That their ideas are radical, their world view is radical and so therefore they are radical.

It's both an identity prejudice and an ideology anxiety. And when those two things conspire or converge in the minds of those in power, we see great instances of injustice.

In this Mini-Lesson, students sharpen their media literacy skills as they evaluate the impact of social media on their lives and question how we can manage social media’s harmful effects.
Activity
Add to Collection

This 5-7 day C3-aligned inquiry explores the compelling question "How do we reckon with a history full of complexities and contradictions?"
Unit
Add to Collection

Standing Up for Democracy

Designed for students in the United Kingdom, these lessons foster the critical thinking, mutual respect, and toleration necessary to bring about a more humane society.
Assessment
Add to Collection

Students culminate their arc of inquiry into the US founding by completing a C3-aligned Summative Performance Task and Taking Informed Action.
More Like This Teaching Resources Learning & Events
The resources I’m getting from my colleagues through Facing History have been just invaluable.
— Claudia Bautista, Santa Monica, Calif