When There Are No Bystanders (short version) 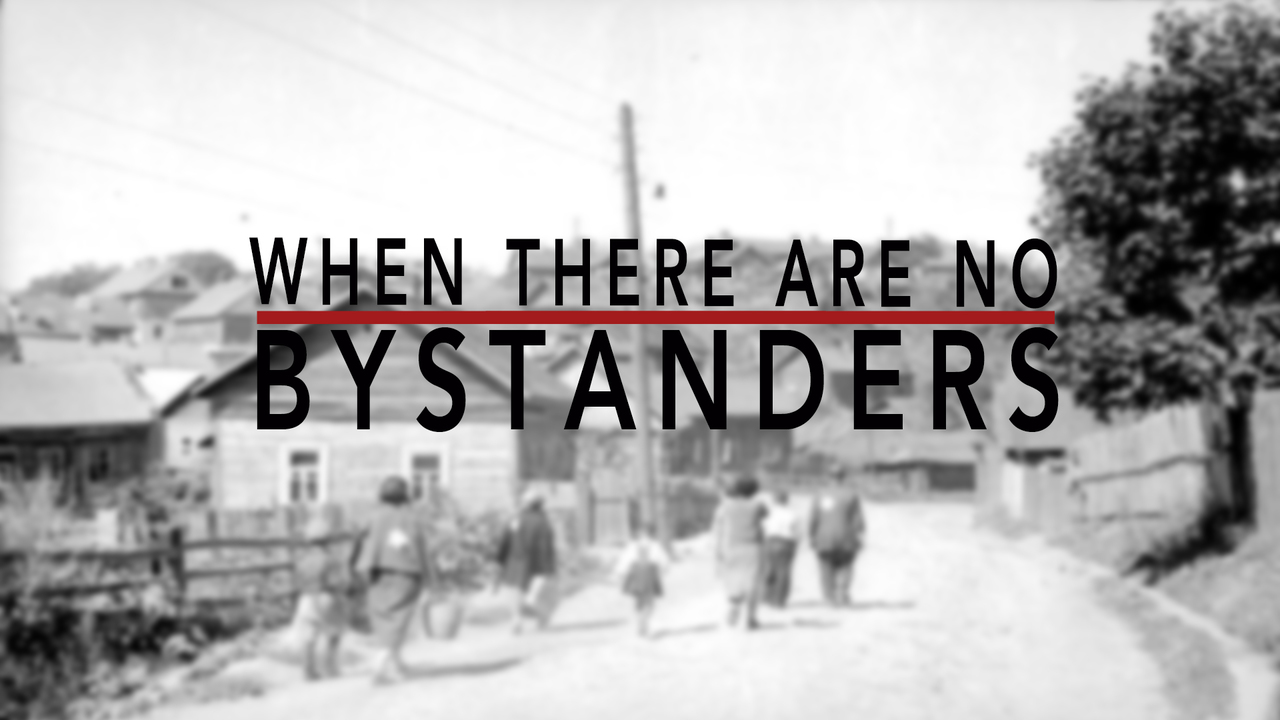 So what do you learn when you study one place in detail? It's very hard to understand when you are studying the entire phenomenon, say, of World War II or the Holocaust or any genocide, really. What do you learn when you look at one place? You learn that nothing is black and white, and nothing is as simple as it may appear. Rarely is there absolute altruism, absolute good, or even absolute evil. The things are always much more complicated than that.

The Eastern European town of Buczacz sits at 49 degrees north by 25 degrees east, but from the mid 1600s all the way through the end of the Second World War, control of the city changed several times. Until the end of World War I, the region consisted of different ethnic groups and developing nations, all in various stages of identifying themselves and their territories through bloody means.

The brutal violence between these groups in the course of the first decades of the 20th century set the stage for one of the worst genocides humanity has ever known. Of the 6 million Jews that were killed during the Holocaust, as many as two and a half million lost their lives in cities, small towns, and villages throughout German-occupied Soviet territories.

From the beginning of the 16th century, Buczacz is a town that has a mixed population. It has Jews, Poles, and people who are called peasants who later become Ukrainians.

World War I in the East was devastating. It was a very different war, but it was a devastating war. It was particularly terrible in Galicia, and Buczacz was, in fact, occupied twice by the Russians. During the war, this widespread violence against Jews by the occupying Russian army, particularly by Cossack units.

And by the time order is reestablished in 1921, Buczacz becomes part of Poland. There is already a legacy of violence, of mayhem, of destruction. I should say about 2,000 houses are destroyed in Buczacz during the war, just from shelling. So there's a legacy of violence, of destruction, and of ethnic animosity. And that was really the preoccupation of politicians and peoples throughout Eastern Europe for the next 20 years until the outbreak of World War II.

So by the late 1930s, you find a region that is in crisis. Now we have Nazi Germany, which is rising in the west, and the Soviet Union in the east and both of them are looking directly at this area as an area that they would like to take over.

So the next crucial moment in the history of this town-- and again, it's both very specific to the town and symptomatic of the area-- is that in September 1939, right after the agreement between Hitler and Stalin, known as the Ribbentrop-Molotov Pact, Germany invades Poland. And 17 days later, on the 17th of September, the Red Army invades the other side of Poland, eastern Poland, and takes over Galicia. That's in agreement with the Germans. There's no fighting between the Red Army and the Wehrmacht at that point.

The result of that is that Soviet rule is imposed on Buczacz. That period of two years of Soviet rule has a huge impact on the subsequent violence because the Soviets do away with the elites of all three groups. And they orchestrate violence against all the groups that incites one group against the other.

In June 1941, the Germans broke their pact with the Kremlin, launching Operation Barbarossa, the invasion of the Soviet Union, the largest military campaign in the history of warfare.

And as the Germans are coming in, the Germans and Ukrainian nationalists who are marching together with the Germans say the Bolsheviks and the Jews are the same. The Jews have killed our patriots. And that unleashes a wave of pogroms all over Galicia, including in Buczacz. And so the kind of license for violence that had already been given by the Soviets is now entirely open. From that point on, that town, Buczacz, and all the towns in this region, are subjected to an extraordinary range and extent of violence for the next four years.

Between one Aktia and another, the Jews try to hide. Now, they may hide in a bunker that they dig under their own floor or into the side of the mountain, but they often will try to hide in the villages. And when you go to the village, you say to the villager, look, I'll give you money to buy food and all that, and also I'll compensate you for this. But hide me. So the villagers say, fine-- they're all poor.

And now the question is what happens? Let's say you run out of money. What do they do with you? They can't afford to buy you the extra food. Any extra food they buy is, in any case, noticed very quickly by your neighbors, because these are small, very poor villages. Why are you buying an extra liter of milk? There's something-- what's going on here? Where do you have the money from?

So you can either be totally altruistic and somehow keep them, you can throw them out, or safest for you, you can denounce them. You could say, these Jews just moved into my barn. I don't know what they're doing here. Come get them. You call the local police. The local police come, take them out, and shoot them on the spot. Often, they don't use the Germans at all.

Eventually, the vast majority of the Jewish population of Buczacz and the surrounding area is killed. What is, again, unique to Buczacz, and a particularly painful tale, is that in March 1944, the Red Army liberates Buczacz. And as the Red Army comes in, up to 800 Jews come out of hiding, both in the city itself and in surrounding villages.

However, two weeks later, there's a counter-offensive by the German army, and the town is retaken by the Germans. And almost all of those Jews who survived are killed. They try to escape with the Red Army. Many of them are very weak, of course, because they've been in hiding. They cannot walk. They're famished. And the Red Army isn't particularly interested in taking them along.

By the time the Red Army returns in July 1944, maybe 100 Jews survive. So that's the end of that community.

So you immediately understand that in a genocide like this, you cannot stay within the relationship between perpetrators and victims. Because in no place does that happen. There is a social environment to that. And that social environment feeds into the nature of the killing, the nature of the event. And these so-called bystanders who have been recognized-- people like saying, well, we have perpetrators, victims, and bystanders. That in small towns, there are no bystanders. That the notion of a bystander is a contradiction in terms when you think about what happens in a town when killing starts. It's not that people just sit and look.

What you find in these little towns is not that there was dehumanization. On the contrary, there was intimacy. The whole event was entirely intimate. You're never simply a bystander. You're always part of the event. And the smaller the town is, everyone knows everyone else.

So these are things that you cannot understand when you look from the top and you say, well, this was industrial murder. People from Berlin were put on a train. They went to Auschwitz. In 20 minutes, they were dead in a gas chamber. It was dehumanizing. It was mechanized. No one really was involved. Here, everyone was involved.

And this event, what happened in this town of, let's say, 15,000 people, happened in hundreds and hundreds of towns throughout Eastern Europe. In fact, half of the Holocaust happened like that.

Facing History and Ourselves, “When There Are No Bystanders (short version),” video, last updated April 20, 2022.

Students reflect on the unit as a whole and begin to write a strong thesis statement for their essay.
Collection
Add to Collection

Lead your students through a detailed and challenging study of the Holocaust that asks what this history can teach us about the power and impact of choices.
Collection
Add to Collection

Explore resources that meet the California History–Social Science Framework standards.
More Like This Teaching Resources Learning & Events
The resources I’m getting from my colleagues through Facing History have been just invaluable.
— Claudia Bautista, Santa Monica, Calif