We May Use Words to Break the Prison: Elie Wiesel on Writing Night

Elie Wiesel explains that he wrote his memoir Night out of a duty to bear witness to his experiences in the Holocaust.
Last Updated: April 19, 2022 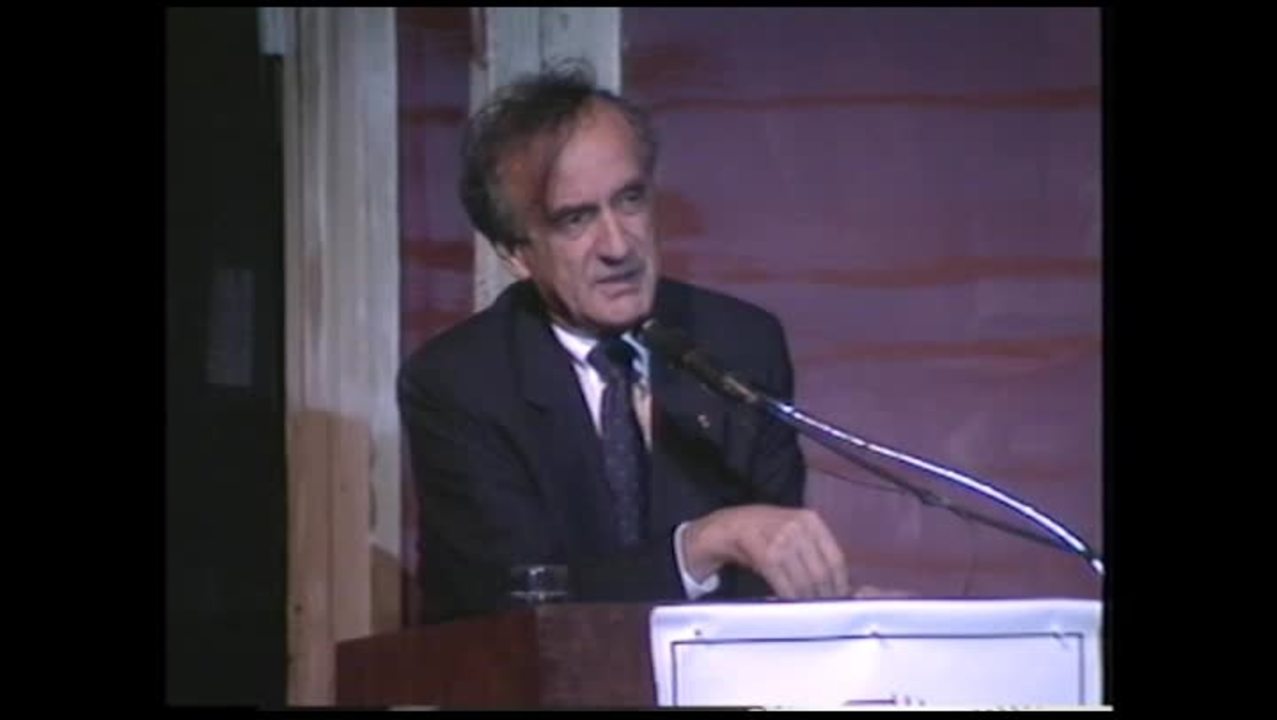 Night is to me, of course, a very special book. It is the basis for all the other books, the foundation. Had it not been for Night, I would not have written anything. It is because I have written Night that I felt more had to come, not to allow the reader or myself to stay with its impact, with its memory, with its vision, as in a prison. Words, too, can become a prison.

Now some of you surely have been told that Night was a longer book. In fact, it was some 864 pages. I am sure you are grateful that I cut it a little bit-- to 110 or 120. Imagine just 860 pages for these poor students there. They would curse me.

This is a way of writing a certain literature. And I felt I had to use that method. This, by the way, is a very biblical method. No language is as concise. No style is as condensed, as concentrated as the biblical style. Because in one sentence, you describe a generation. He was born, he lived, he had children, and he died. What else do you have to say?

But in those sentences, in those words, there is so much. And I, as a student of the Bible, as a Jew who believes in the Bible, I felt that as a student and a Jew, I had to go in the footsteps of our ancestors and try to do what they have done so well, meaning to use less words in order to give more meaning. If I could have written the first word of the Bible, bereshit, believe me, I would have given up all of my books. Just one word, not just one bereshit, in the beginning.

Now when I wrote it 10 years after the war, and in the beginning, I couldn't find a publisher, neither in France nor here-- even in France. Where Francois Mauriac, who was a great, great man of letters, a Catholic writer, Nobel laureate, an older man. And I was young, beginner. We became close friends. And in spite of his friendship and support, we couldn't find a publisher in France.

He, himself, took the book and brought it to publishers, literally, personally. No way. Finally, he found a small publisher who happened to be the publisher of Beckett. And even then, when we came to America, we couldn't find a publisher. It went-- I'm saying this-- there may be writers here who have many rejection slips. So don't worry. My book wandered from one major publisher to another. They couldn't find one.

And finally, we found a small publisher who gave us a hundred dollars, a hundred dollars for the book. So 50 went to my French publisher, 10 percent to my agent. And what I was left with, of course, was a very great sum, which then to me was a great sum anyway. And then the book finally came out. It had, luckily, a good review in The New York Times, and in other papers, too, I imagine.

But they couldn't sell it. The first printing was 3,000. We couldn't find readers. I know that the publisher went to rabbis. Rabbis! And the rabbis said, we cannot impose it on our children, because the parents are against it. The parents don't want us to burden their children with these memories. Nobody wanted them. And those who read were alone, were in a minority.

Nevertheless, after all, one doesn't write to be published. One writes because one writes. The obsession that a writer has is that of the witness, meaning he or she must bear witness. Whether others are listening or not, that's not my problem, it's their problem. My duty is to write. Those who read, good for them. Those who don't, too bad.

That was the attitude. It may sound a little bit arrogant, but believe me, it's not arrogance. It's sheer lucidity. It is simply a perception of reality, that we must do what we can do and what we do, and do it well, as well as possible.

So Night had a career, which I use the word career almost in a poetic way, because the word career should not be applicable to this kind of book. It had a future, let us say, that slowly children began reading it. And the children brought the books home. And the parents were embarrassed, after all. The children read, and they shouldn't? They also read a page. And that's really what happened, that the children forced their parents to remember.

Now, today, I am, of course, grateful to you that you read that book. But please, don't stop with it. Because if you, John, or Marco, you're teachers here, if you will give Night to your to students here, and they would read nothing else I think it would be a sin toward you. The world has not stopped at Night. The world continued.

It is true that something stopped. Some lives were broken. It is true that some worlds were crushed, shattered, some idols disappeared, vanished. Some suns were extinguished. But life does continue. If not, what would we do here? If not, the testimony itself would be stifled by the curse, by the cursed universe it conjured.

So continue to read other books. Some of them are supposed to bring joy, not despair. Others are meant to open gates towards love, towards truth, towards happiness, towards friendship, towards faith. Do not see in Night as a prison which is sealed from within, seven times. Night is a foundation to say look, this is what happened. Can we continue? Even if the answer is no, I would say we must continue. We must invoke a meaning, even when there is no meaning. We must formulate a prayer for hope, even if there is no hope.

Facing History and Ourselves, “We May Use Words to Break the Prison: Elie Wiesel on Writing Night,” video, last updated April 19, 2022.

Help students identify and analyze the key characteristics of the three most common types of news articles.
More Like This Teaching Resources Learning & Events
Using the strategies from Facing History is almost like an awakening.
— Claudia Bautista, Santa Monica, Calif