Teacher Martina Grant leads a discussion about the music in “The Children of Willesden Lane.”
Last Updated: April 15, 2022 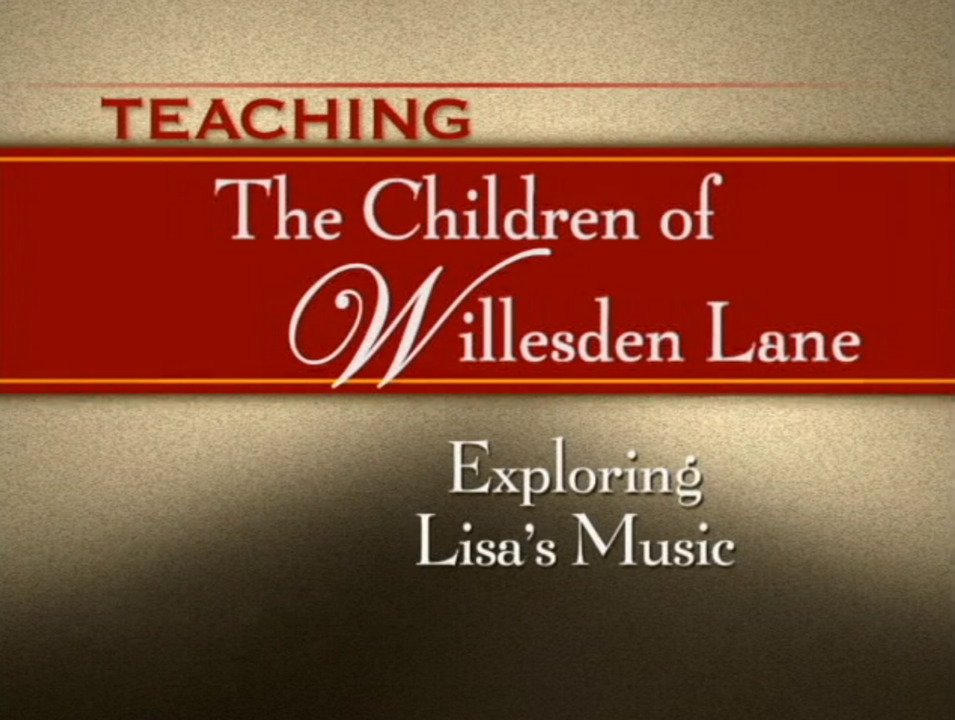 History is not taking place in this vacuum and nothing else is going on around it. There are plenty of things going on in history, art, sciences that are important to connect in every level or time period of history that you teach.

Today we're going to continue our discussion of The Children of Willesden Lane, and a section of Chapter Three. And to help us better understand the lesson in regards to the music that was very close to Lisa's heart, we're going to have Mr. Arzberger, our music teacher, talk about some of the musical items that Lisa chose throughout the book.

The song I would take with is called "Rie y Llora" by Celia Cruz, and it means basically crying and laughing. And basically I grew up with my mother, whenever she was sad or anything, she used to play this song. It always cheered her up. And I always-- I mean, all my life I remember this song playing.

It would be L-O-V-E, which is love, by Ashlee Simpson. And I would take this because the song explains how girlfriends stick together through everything, and no matter what happens, they're still together.

Very good. So what we're going to do now is to turn to page 25 in The Children of Willesden Lane, and I'm going to read the passage that sort of reflects some of what Lisa's passion for the music. And we'll talk about the music that she chose to bring with her.

"She walked through the house, determined to remember everything she loved, yet already feeling like a stranger. Then she stopped at the piano and brushed her fingers in the air above the keys. The copy of Clair de Lune was on the piano. Guiltily, she rolled it up and put it in her pocket."

Now, I want you to think of that reading as I play for you a piece of Clair de Lune, and think about what Lisa may have been feeling when she picked up this sheet music.

I think that the intensity of the students was felt in that moment, that they really could identify with Lisa's feelings by playing the music. They really had an understanding of what she was thinking as she was walking out the door.

OK, what about this music do you think Lisa was responding to so strongly?

It's peaceful and probably makes her forget about all the things outside of her.

Is going to talk about the music that Lisa chose to bring with her and what she plays throughout the book, and he's going to try to give you the language to help you describe it.

Let me ask you the big question. What is that song about? What did this composer by the name of Claude Debussy, what did he want to accomplish?

I think it's about relaxing yourself.

Yes, I think that when you're down or when you don't know what to do sometimes, you just want to clear your mind. So you want to relax, have something to go back to that will relax you out of all the stress or worries that you have.

I think it would be about how he felt exactly, because a person always feels different emotions and they express it differently.

Let's put the title with the name Clair de Lune, which means moonlight. I want to play another piece for you. The name of this composer, Ludwig von Beethoven. And the title of this work is his Sonata Opus 27 in C-sharp minor. I want you to compare this to the one you just heard. Compare this one the Beethoven with the Debussy.

The Moonlight Sonata by Beethoven.

Question. Talking about the music itself, let's put emotions and moods and atmosphere to the side. Let's talk strictly logistics here. One, which of the two is it easier to snap your fingers to, the Beethoven or the Debussy?

Right, this is the Beethoven. Or this.

My goal for today's class was to provide the students with a musical vocabulary of terms and words so they can further talk about a lot of the music they're going to hear that accompanies the book, as well as the music in their own lives, and some background information on the pieces played.

Which is it easier to snap your fingers to?

Because it has a more constant beat. The first one, Clair de Lune, it's more-- it's more original, I guess, but Beethoven--

It's more like it's different. Beethoven has more of a constant beat, like he has-- songs nowadays, you have a bass going to it, like a lower song. That's more what Beethoven has.

OK. Anybody agree or disagree?

I agree with her because I thought the same, but Beethoven, I think it has more of a steady beat, and Debussy, he has more rest between each note.

Good. Definitely Beethoven had the constant pulse, and that has to do with one of the elements of music, rhythm. And from rhythm you get tempo. How fast or slow a piece of music is, that's the tempo. With Beethoven, you can stand there and count off four beats and play it. 1, 2, 3, 4. Da-da-da, da-da-da, da-da-da, da-da-da.

So we think of tempo as the heartbeat of the piece. It's what keeps it alive. You want it to be consistent. You want it to be steady. The Beethoven has that, the Debussy does not. And, of course, Debussy wanted that. Question 2. Which of these pieces is in a major key and which is in a minor key?

And if you're sitting there looking at me like I have three heads, good. That's the point. Which is major, which is minor?

Beethoven, I think he was minor because it's sort of like-- minor, I know it means sad, sort of.

OK, minor means sad. When you talk about a piece being in a major or a minor, what you're talking about are chords. Music is made up of another element known as harmony, and in harmony you have these-- what makes harmony harmony. You have how chords relate to one another and follow one another.

And so you have the most two basic kind of chords are major and minor. That's an N, believe it or not. And with those chords come certain emotions. Minor could be sad or it could be angry, and major, on the other hand, could be happy or joyous or victorious. So you have chords that would be major.

A happy sounding chord. Or you have chords that are sad.

Minor. Beethoven is in minor.

Sounds great, doesn't it? What if Beethoven made it major? It'd sound a little happier.

Right. So altogether, the mood is different. Debussy, when he wrote the Clair de Lune, wrote in major key.

And here's one of those interpretive things. Even though it's in a major key, the fact that it's played very high and gently on the piano can sound heartbreaking at times.

When I first read The Children of Willesden Lane, I was taken aback about how musical it really was. I mean, a lot of the things that the author noted it about the life and the times, I was just like, wow, this is so neat to teach kids about music through this book.

So what's the whole point of this? Lisa knew both of these pieces very well. Beethoven is the music of her city. I'm saying Beethoven lived in Vienna, composed in Vienna, and this type of music is her culture, just like you have your music. And somebody mentioned a Celia Cruz song. It's music of your people, it's music of your-- even if you weren't born then, it comes from your tradition.

Although I love music and listening to music, I never really understood the language for what I was listening to, and not comfortable with trying to express that to the kids, so I was just glad to have Jeff in the classroom explaining to the kids what they should be listening to when they listen for music and what brought about those feelings. So it helped me better understand Lisa as well.

She would remember her past by it and that's how she would express herself, with her music.

That's a very good point. When we read the story, she's going to refer to her feelings sometimes as the way she feels when she plays certain pieces of music. OK, well, you guys did a wonderful job today. Thank you for your attention. Thank you, Mr. Arzberger. Let's thank Mr. Arzberger.

I loved bringing together two different disciplines. History, music to teach the same point in time. I think it's extremely relevant.

I think that they need to see that you can't just read a book because of the words. You have to be able to picture what's going on in the story.

Students investigate the messages in Adolf Hitler's speeches by performing a close read of the transcript of his first radio address as chancellor.
Lesson
Add to Collection

Students explore the intertwined personal stories of Jewish refugees who attempted to flee to the United States and the American rescuers who intervened on their behalf.
Teaching Strategy
Add to Collection

Help students identify and analyze the key characteristics of the three most common types of news articles.
More Like This Teaching Resources Learning & Events
Most teachers are willing to tackle the difficult topics, but we need the tools.
— Gabriela Calderon-Espinal, Bay Shore, NY