On the Roots of Good and Evil

Ervin Staub reflects on what factors might lead someone to become empathic and altruistic.
Last Updated: April 13, 2022 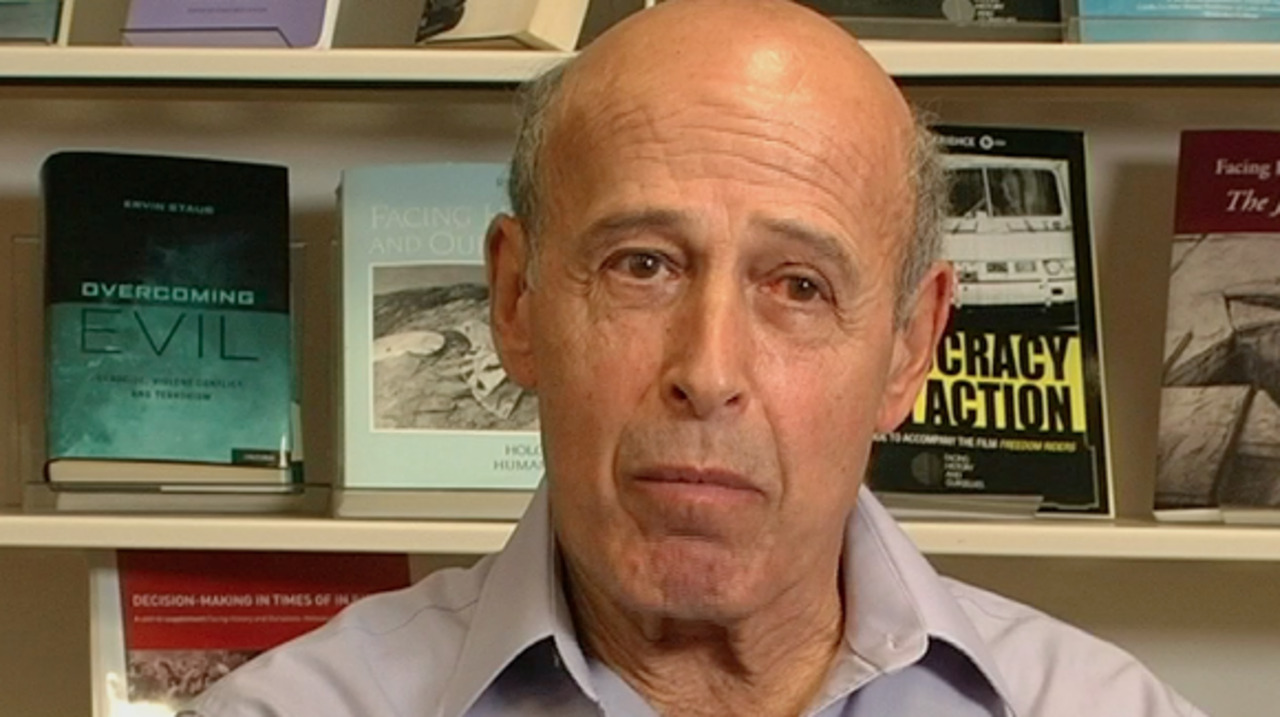 The roots of people helping others and becoming unselfishly helpful, which means altruistic, are the opposite of what leads people to harm others. It's unlikely that somebody who doesn't feel warm human connections is going to feel warmth and caring about other people.

Another important element is positive guidance. Explaining to children the consequences of their behavior on other people is a very important piece of it. Research shows that that contributes to kids feeling empathy for others.

And how do you develop the confidence for that? Children need to have a voice. They need to learn early on that, first of all, people take seriously what they say, that they can contribute to decisions, to making rules, that parents and teachers have consideration of what they say and, also, to be encouraged and affirmed when they act according to their values rather than being told, no, don't rock the boat. Don't do anything that, in any way, stands out or is any different. So all of these things are very important.

When people are psychologically wounded as a result of terrible things that happen to them as individuals in their family or outside their family but as individuals, harsh treatment, abuse, or as members of groups, they tend to come to see the world as dangerous. They are not so positively inclined towards other people. They are afraid of people. And other conditions that represent a new threat to them, they may easily strikeout because they believe that they need to use violence to protect themselves.

People who perpetrate harm tend to come to see those whom they harm in a negative light. Rather than valuing them as human beings and valuing their welfare, they come to devalue them. And, often, over time, they excluded them from the human and moral realm, which becomes possible to harm them more and more.

If I am part of a context, for example, a group that holds an ideology that says we want to create a better world and these people stand in the way, they are enemies. Or if I devalue somebody for other reasons and there are strong forces that motivate me to harm that person, it's unlikely that my conscience arises and stops me. But after I harmed someone, I tend to justify my actions. I devalue them more. I see them as blameworthy for certain reasons.

Now, sadly, in the course of increasing hostility, discrimination, and limited violence against some group of people in the society, most bystanders remain passive. There is very often very little resistance in the course of the evolution of violence. And one reason for that, I think, is because, often, this goes in relatively small steps.

There is more discrimination. There is a law that is passed against these people. There is a governmental institution that established to, quotation mark, "deal with them." However, when genocide actually begins, when people see that these people are being killed, taken away, when they know terrible things will happen to them. And some people begin to take action and endanger themselves to rescue.

Now, why do they do that? Well, they hold certain kinds of values, often. They believe in justice, and they see this as unjust. They feel empathic. They value human welfare. They feel personal responsibility for other people's welfare. And these are activated by what they see as terrible things happening to these people.

There are other influences, also, that make people at these times active. So sometimes somebody from this group that is victimized comes to them whom they had a past relationship with. And given that they have a connection to these people, to this person, when this person asks them to help them, to hide them, to do something for them because of the past connection, combined with these values, people are more likely to help.

Facing History and Ourselves, “On the Roots of Good and Evil,” video, last updated April 13, 2022.

Teach about the 1963 Chicago Public Schools Boycott as an entry point as entry point for discussing the history of segregation in US northern cities.
Collection
Add to Collection

Incorporate these community-building routines into your lessons to set a welcoming tone, allow students to connect with one another, and encourage goal setting.
More Like This Teaching Resources Learning & Events
Most teachers are willing to tackle the difficult topics, but we need the tools.
— Gabriela Calderon-Espinal, Bay Shore, NY