Use this graphic tool to help students consider the many factors that shape their own identity and that of groups, nations, and historical and literary figures.

About This Teaching Strategy

Credit:
Facing History and Ourselves

Before creating identity charts, you might have the class brainstorm categories we each consider when thinking about the question, “Who am I?”—categories such as our role in a family (e.g., daughter, sister, mother), our hobbies and interests (e.g., guitar player, football fan), our background (e.g., religion, race, nationality, hometown, place of birth), and our physical characteristics. If it doesn't come up in discussion as you generate your group list of categories, prompt students with questions that help them think about the following ideas:

It is often helpful to show students a completed identity chart before they create one of their own.

First, ask students to write the name of the character, figure, group, or nation in the center of a piece of paper. Then students can look through text(s) for evidence that helps them answer the question, “Who is this person/group?” Encourage students to include quotations from the text(s) on their identity charts, as well as their own interpretations of the character or figure based on their reading. Students can complete identity charts individually or in small groups. Alternatively, students could contribute ideas to a class version of an identity chart that you keep on the classroom wall.

Reviewing and revising identity charts throughout a unit is one way to help students keep track of their learning.

Use a Starburst Identity Chart to help students visualize the difference between factors that they feel make up their identities (arrows pointing out from the center) versus labels that others place on them (arrows pointing into the center). Because we may agree with some ways that the outside world views us and disagree with others, there may be some overlapping ideas between the two sets of arrows. Students can also use examples from texts to create Starburst Identity Charts for characters and historical figures to help express the complexity of their identities.

After students create an identity chart, you can ask them to select the five items they think are most significant in shaping this person or group’s identity. As students compare their lists, this often deepens their understanding of the person being studied.

Individual and group identities are comprised of multiple factors, some having more significance in particular contexts. To help students appreciate this concept, you might ask them to think about the five factors that are most significant to shaping their identity in one context, such as school, and then in another context, such as home or with friends.

If you are using identity charts in a remote learning setting, view our editable student-facing handout.

The following questions can help you plan to use identity charts in a remote learning environment:

An identity chart is a diagram that individuals fill in with words and phrases they use to describe themselves as well as the labels that society gives them.

Credit:
Facing History and Ourselves 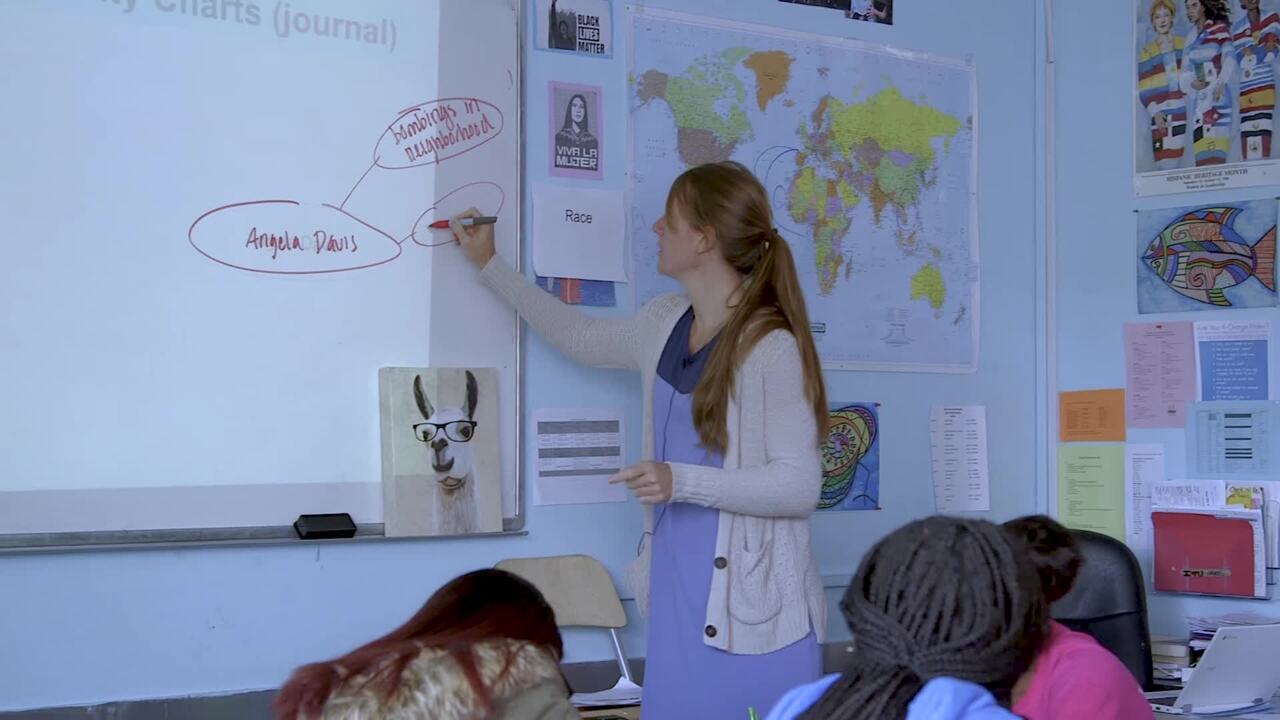 ELENA MAKER: Identity charts is infinite. There's so many things, and we're always adding things. And I like the flexible nature of the identity charts, and that it feels more organic, and it's inclusive of all parts of our identity. And so as we're talking, we can throw all these different things on the board. And then we can start to draw lines and connect them. And so I think for conceptualization and idea-generating, identity charts can be really helpful.

So we actually started in September. And it started off as an identity unit, which was inspired by "Facing History" and the identity readings that they have. Just to streamline the process was to make the "My Part of the Story" stories about the civil rights leaders. So we chose excerpts from-- each one of them had some sort of biography or autobiography. And we used those in class, and looked at these key words around labels, assumptions, voice, legacy, and identity, which are the key words in that identity unit.

Our essential question for the day-- Ernie, will you read it for us, please?

STUDENT 1: How do our personal stories influence how we choose to fight for justice?

ELENA MAKER: Excellent. So that is our essential question for the next three days. So we're beginning to put all this learning together to think about how different individuals' personal stories influence their fight for justice.

So the first thing we're going to do, and I know you all know how to do this, but we're going to make it a little more complicated today. So we're doing an identity chart. But in this identity chart, we are comparing and contrasting the experiences and beliefs of both Yuri and Angela.

So in your journal section-- so we're flipping to our journal section-- we're going to put Angela on one side of the page. And on the other, put Yuri. And leave plenty of space. So you want a whole journal page for this. So I'm going to challenge you. Before we talk about it together, I want you to think and write one thing about Angela's background.

All right. So what's one thing people wrote for Angela Davis, in terms of her experiences?

STUDENT 2: I said that when she was younger, she experienced a lot of bombings in her neighborhood.

STUDENT 3: Do we write that?

ELENA MAKER: Great. So let's add to that. Where was her neighborhood?

ARISELA: I said she grew into political activism when she was 12 or 11 years old.

ELENA MAKER: Yes. She was a young activist.

ELENA MAKER: Yes, perfect. So we can add off of there.

So she said she doesn't even really remember when she started to become an activist, because she just grew up in this household where activism was part of their belief system. Yeah.

OK. Should we start with Yuri? Angie, and then Alex?

ANGIE: She grew up in a concentration camp.

ELENA MAKER: Internment camp. Did she grow up there?

ELENA MAKER: She went as a teenager, right? So intern--

All right. Olivia, you had your hand up?

ELENA MAKER: Anyone know-- remember why that was?

STUDENT 8: That's when she moved to Harlem?

ELENA MAKER: Yes. And why do you think Harlem made that change-- helped her make that change into an activist? What was going on in Harlem?

STUDENT 9: Was it because of the rules and stuff like that?

We do identity charts in their freshman year, and at the beginning of the year. They're very used to talking about issues around identity at Blackstone our social studies curriculum in general really focuses on that.

They have some vocabulary and some structure by the time they get to me sophomore year. And I also hope that in the Socratic seminar, as they're discussing, X person had this experience as a young person, and it led them to take this action, maybe they'll say something similar. And so I'm hoping that they're starting to make those connections in their own lives. And that's something we can discuss after this once I have the content down.

The handouts below are used in this teaching strategy.

Help students communicate independently and develop as active listeners by giving them the opportunity to discuss and share ideas in the format of a people's assembly.
Teaching Strategy
Add to Collection

Develop a classroom contract to create a community of mutual respect and inclusion.
Teaching Strategy
Add to Collection

This brainstorming exercise is a quick way to generate students’ thoughts, measure prior knowledge, or check learning.
Teaching Strategy
Add to Collection

Students clarify aspects of their identity or the identity of a historical or literary figure by writing poems that focus on deeper elements of personal makeup like experiences, relationships, hopes, and interests.
Teaching Strategy
Add to Collection

Students seek out and share ideas and information with classmates through this cooperative learning strategy.
Teaching Strategy
Add to Collection

Learn to Listen, Listen to Learn

Educators will structure a discussion that uses journaling and group work to strengthen students’ listening skills.
More Like This Teaching Resources Learning & Events